NXT motors spin when in air but stop on ground

I have a car that I made with 2 motors in the back and one motor in the front. The motors spin fine in the air but when I put it on the ground to test my program the motors stop. The robot itself isn't very heavy so I don't think that is the issue. 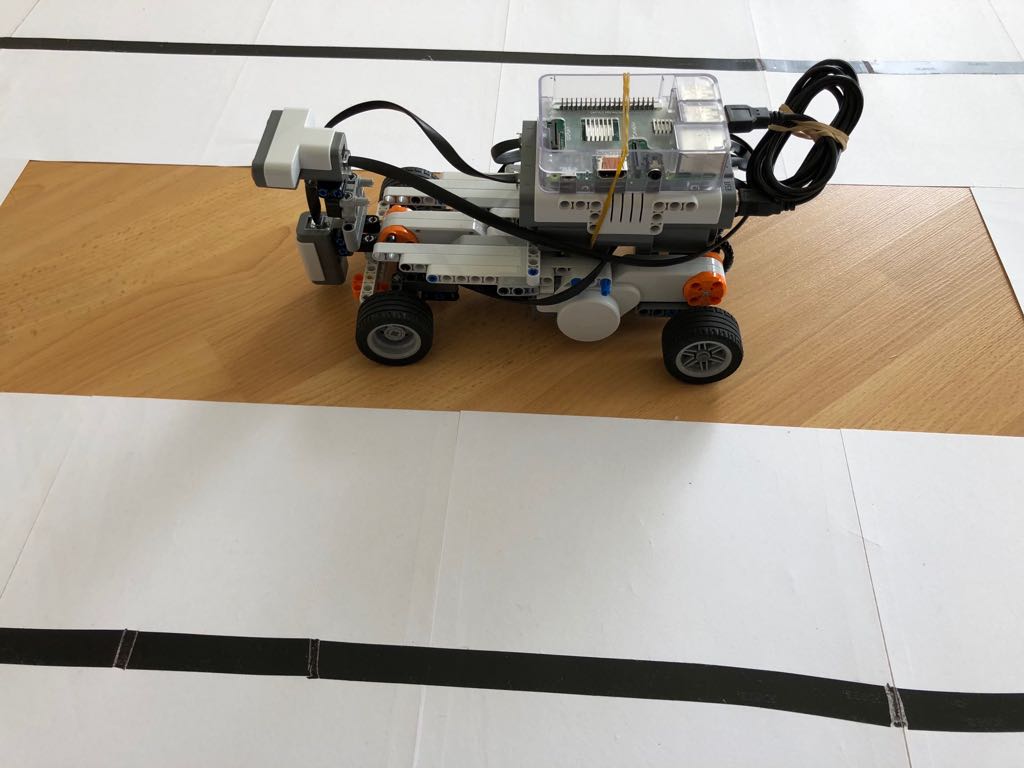 NXT and EV3 motors don't slip unless set to coasting. This means that any external means to speed up or slow down the motor will be counteracted by the motor control. I believe basically one or more of your motors is acting as a brake for the others because the controllers believe that they should act that way to obtain the desired speeds you programmed them. Even if all things are equal (desired motor speed, direction and wheel diameter), other minor variations within the motors can cause variations in the total speed that are counterproductive...

I once created a sumo bot having three motors, the intention being two motors for tank steering and an additional motor to provide extra power. I think this is similar as to what you are trying to achieve. My solution was to combine the motor speeds with differentials (as present in several technic vehicle sets)...

Sounds/looks like a software issue. My first guess was that the program is jumping straight into a line following algorithm and that program is stopping as soon as it detects the table top. But, that would be fairly easy to test by approaching the table from the edge of the table, so the light sensor would stop the motors before the back wheels got close to the table.

Second guess. The line following algorithm starts up in a mode that runs the motors at a low power setting (less than 5), which works when suspended in air, but it not enough power to turn the wheels when on the table because there is some resistance (either the front wheels or ?). The line following is waiting for some rotation distance before moving to the next step and it waits forever.

Probably best to copy/paste sections of the program. Throw out half until something works.

Of course, a screenshot of the program would help.

Not the answer you're looking for? Browse other questions tagged nxt motor or ask your own question.

5
What can cause programmed NXT 2.0 motors to misfunction when small resistance is applied?
8
NXT motors not moving?
4
NXT Programming not working
2
Java BufferedImage with Lejos NXT: Java Heap Space
2
NXT Program doesn't do what it's supposed to do
5
Problem with running two XL motors motors
3
XL motor and M motor on IR receiver = same output?
1
Program for NXT golf robot not looping properly
2
How do I run the LEGO Technic V6 engine using a Lego electric motor?
2
How to prevent PF M-motor from springing back