According to this review of the new 60197 passenger train you can only have one Bluetooth thing talk to the new LEGO battery box at a time.

The new Power Up system as it currently appears in this set is very rigid. One remote or device can be used to operate one battery box/receiver, which in turn can operate one train motor. All of the flexibility of the old system seems to be gone.

I'm hoping to put a train in my office before Christmas and it would be great if multiple people could install the app and change the speed. Is that too much to hope for with LEGO's current evolution of this technology? This seems like a normal thing to expect for something that uses Bluetooth, but the review above makes me doubt that applies to LEGO. Has anyone tried this?

As far as I know, this is not possible using the current stock firmware. The battery box can only pair with one device. The UI on the battery box is a single button, and for simplicity the device is either in a mode where it is looking for a device to pair with (flashing light) or already paired (solid light). There isn't a way to pair it with another device once it is already paired, and pressing the button while paired cancels the current pairing.

I'm hoping to put a train in my office before Christmas and it would be great if multiple people could install the app and change the speed.

There are ways to allow multiple people to control a device, but it will likely require a bit of software development.

My students and I have been working on a possible solution to this problem that I wanted to share. We've created an open source project for the Raspberry Pi called twitch-powered-up that allows a LEGO model to be streamed from a webcam and controlled via simple natural language commands on Twitch chat. Here's the basic idea: 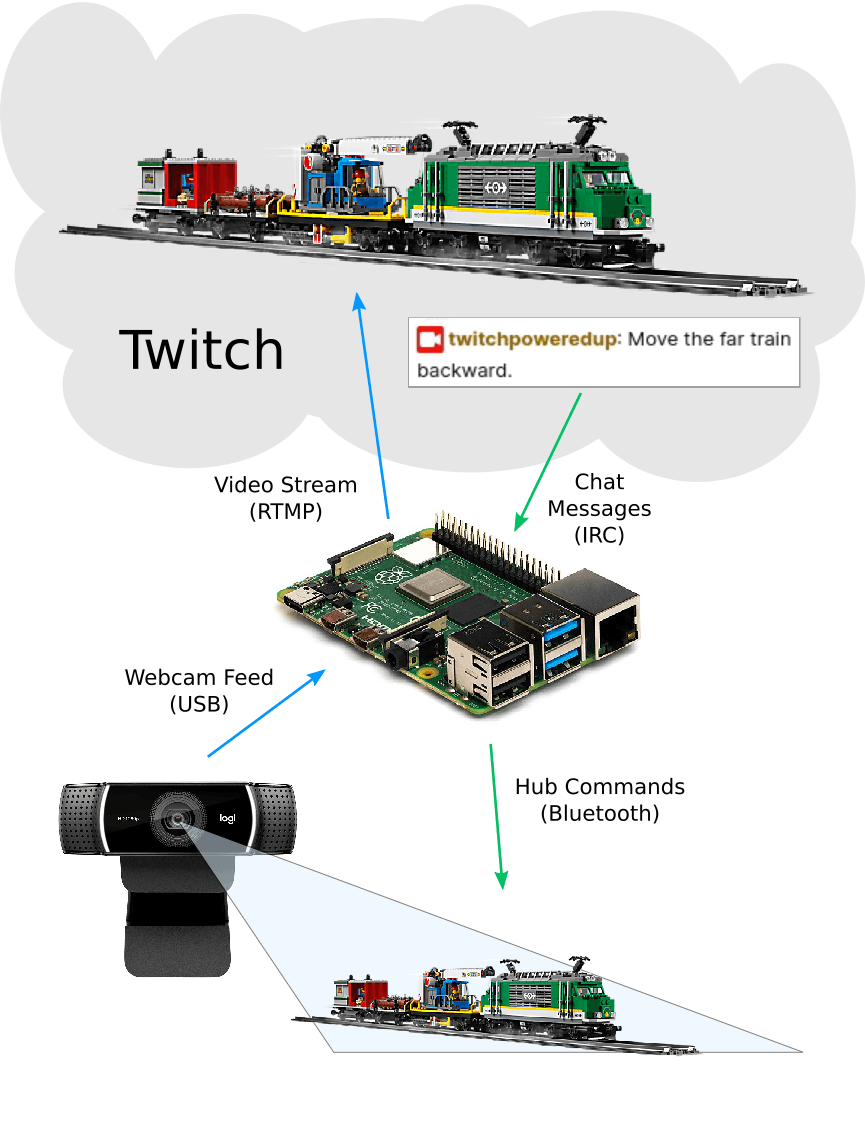 The limit seems to be the number of devices your Bluetooth will pair with.

When paired in this fashion, the buttons on the remote do nothing. You'll need to write code to dispatch messages to the battery box to perform whatever action you want your remote to control. I wrote a script that makes the remote behave like the remote in the box, i.e. it makes the train go faster or slower. But as the train only uses one side of the remote, I programmed the other buttons to raise and lower the gate at the level crossing, using a Boost brick which was also part of this program.

I've done some experimentation with using one powered up controller over two hub devices ... ( You must have one motor on channel A in Hub 1 & the other on Channel B in Hub 2 ) Seems to work, pairing involves turning on all devices at once, ( controller & Hub ) and waiting for it to sync + same with turning it off - press & hold all devices for 5 sec ...

The other program I've looked into ( but not tried yet ) is "The Lego Train Project". Found here : https://www.eurobricks.com/forum/index.php?/forums/topic/169318-control-all-your-powered-up-power-function-sbrick-devices-with-a-single-software/

Should give that a go to see if it can control trains from multiple locations ... :)

Not the answer you're looking for? Browse other questions tagged trains bluetooth remote-control powered-up or ask your own question.