Are there more LEGO minifigures than humans?

In 2014 Randall Munroe of XKCD predicted that there would be more minifigures than people by 2019. 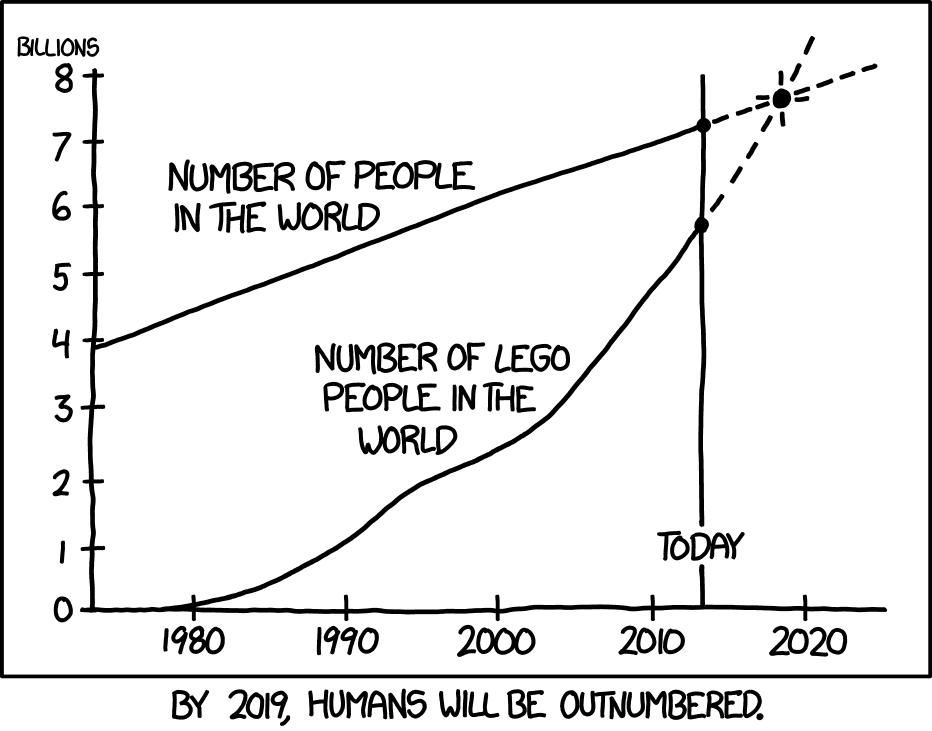 Was he correct? Have we reached the crossing point, and if so, when? If not, when will we?

To get the official info, I have asked LEGO about this topic:

Dear LEGO, in 2003 you have reported that there are (were) 4.000.000.000 LEGO minifigures produced by that time. I was wondering if there are more recent numbers available, especially since the popularity of the collectible minifigures, which could indicate an increase in the production rate.

Could you please provide some official information? Even estimates would be welcome.

And received the following reply:

Thanks for getting in touch with us.

Thank you for your interest in LEGO® Trivia, that is an interesting question.

You are certainly right that the number should have increased drasticly since then but I can't give you any new numbers. I am sorry but you will have to wait till our marketing department decides it is time to release more fun facts like this.

So in the absence of official numbers, we can only guess.

Although it is impossible to be sure without more information from the LEGO Group, it seems likely the answer is yes (both now, and when the question was asked)—at least when you consider all minifigures ever produced, ignoring whatever minifigures have somehow been destroyed.

In early 2015, Lego reported that "Over the years more than 5 billion minifigures have been produced". This is in the 2015 company profile which I found on the Internet Archive. This was published on February 25, 2015, together with their 2014 Annual Report, so I think we can assume it reflects the state at the end of 2014/beginning of 2015.

In their 2015 report (also available on the Internet Archive), they said "In 2015, we made more than 725 million LEGO® minifigures globally."

At some point during the year the number would have been equal to the human population, which estimates place somewhere between 7.44 billion up to 7.63 billion in 2018.

18
Is there a standard scale for building "minifig scale" creations?
23
Is there a reliable way to determine what minifigure is in a LEGO Minifigures series package?
17
How do I make Victorian looking minifigures?
9
Why does LEGO sell minifigures randomly?
18
Why are there "unique" characters in many sets?
2
Buying Individual MiniFigures
5
Why are LEGO minifigures getting more and more expensive?
3
How can I loosen my Minifigures arms and legs?