Just two weeks ago, my kid got a 60198 cargo train and we added a set of 60238 switching tracks. With two (out of three) switches we have the problem that the switch doesn't close properly anymore to perform the lane change (the position to go straight is fine). As you can see the movable rail part doesn't completely close against the fixed rail track, causing the wheels to miss the turn. The train either just goes straight (best case) or de-rails (worst-case). 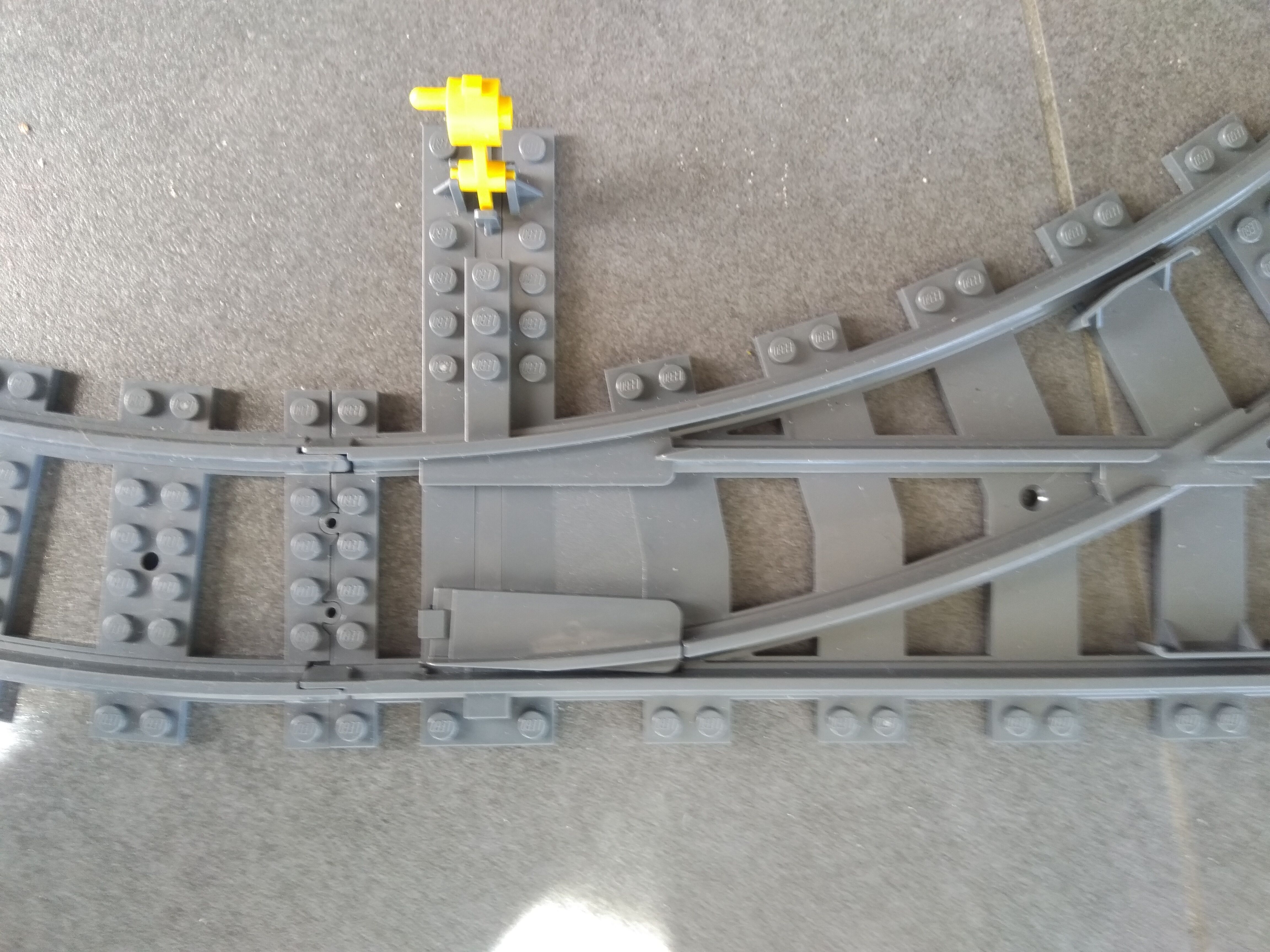 Any idea what the cause is, and is there anything I can do to fix this? This happened with two different sets, bought about 5 months apart (but put in use at same time) with two different vendors across Europe, so I'd be surprised this to be a 'bad batch'. I've also tried reversing the locomotive to check it isn't because the wheels are misaligned, but both the powered and non-powered wheels give the same result. On first sight it looks like there is a spring in the switch which got stuck/compressed/..., but I have no idea how to open this without breaking the track. 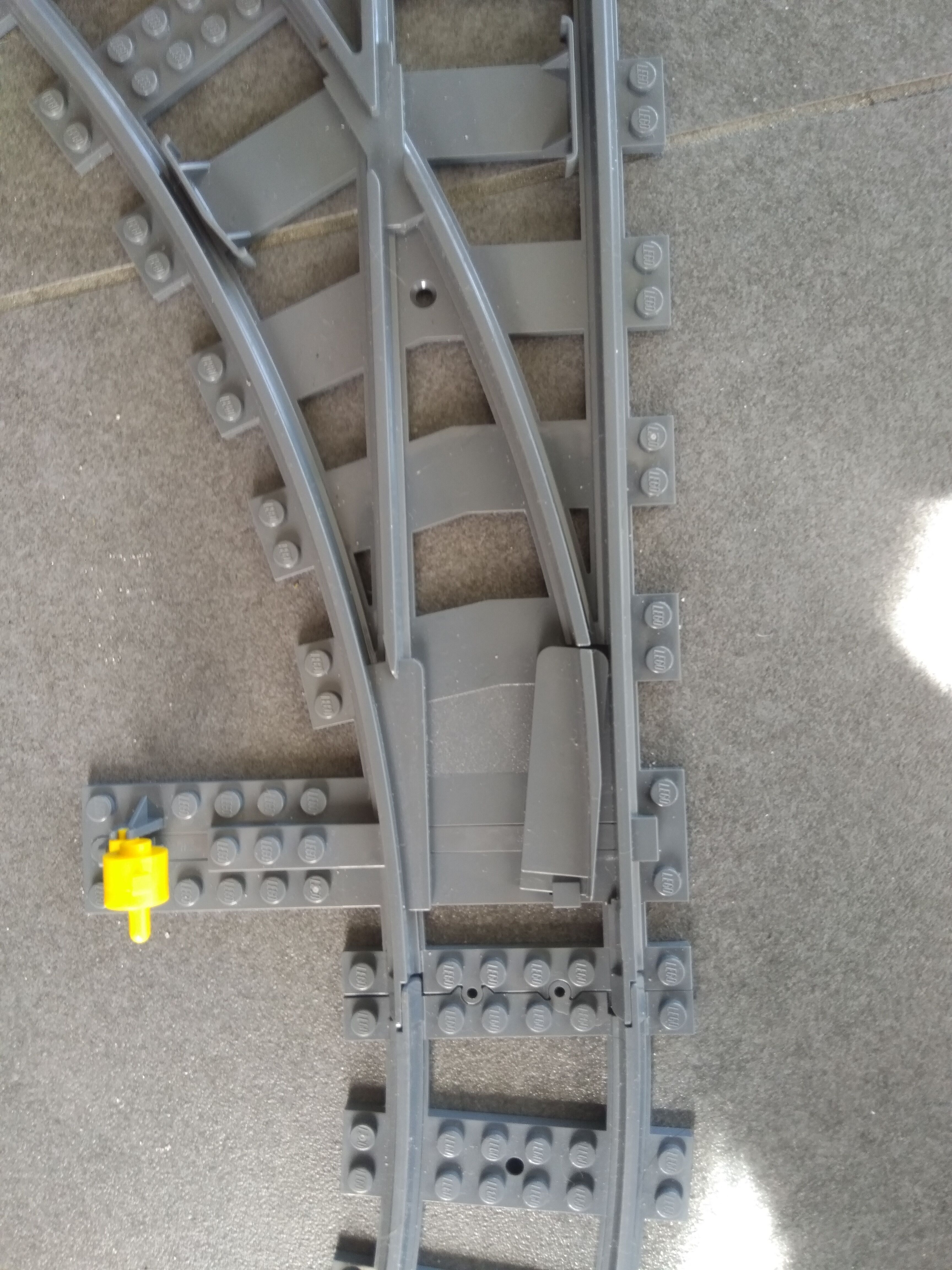 Warning: LEGO pieces were harmed for this answer

How the switch works

The back plate is held into place by 14 pins. We'll carefully pry it open with a knife. Alternatively, we could use a drill bit to slowly scrape off the pinheads.

Both methods are destructive. The back plate needs to be glued back on later.

Once we can lift off the backplate, we already got the slider.

Next we'll unplug the switch. Let's take a pair of pliers and carefully -just a bit!- squeeze the peg, then push it out. 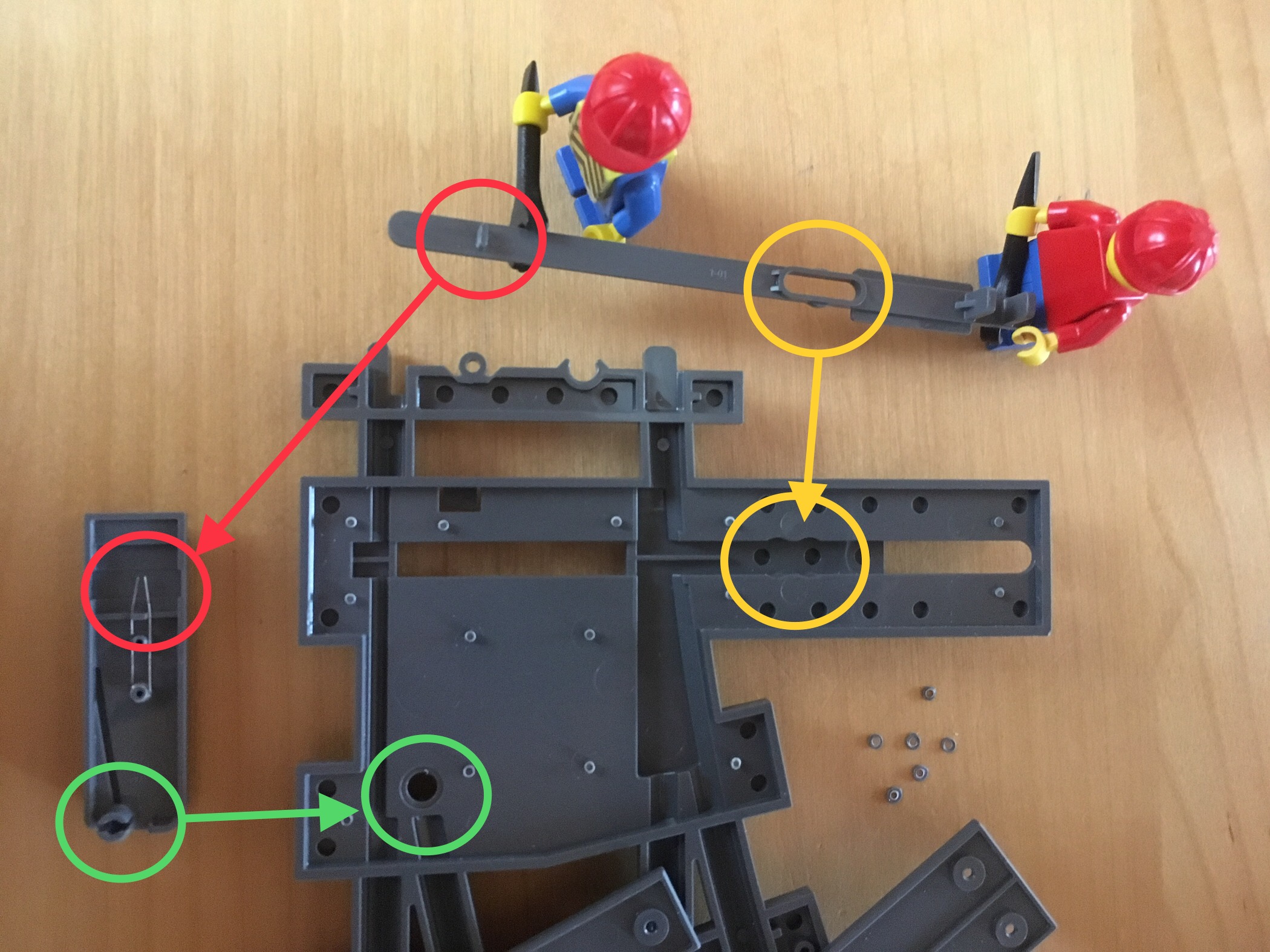 So much for starters. Now, what about your points?

In any case, use some compressed air first. Switch them repeatedly. Maybe it's just a grain of dust. Still not functioning properly? Can you still return them?

If the slider's malfunctioning, you'd have to remove the back plate. However, if the spring's your suspect there's a less destructive way.

But take a look at the back plate. You can barely see it, but there's a circle. It's right on top of the peg. 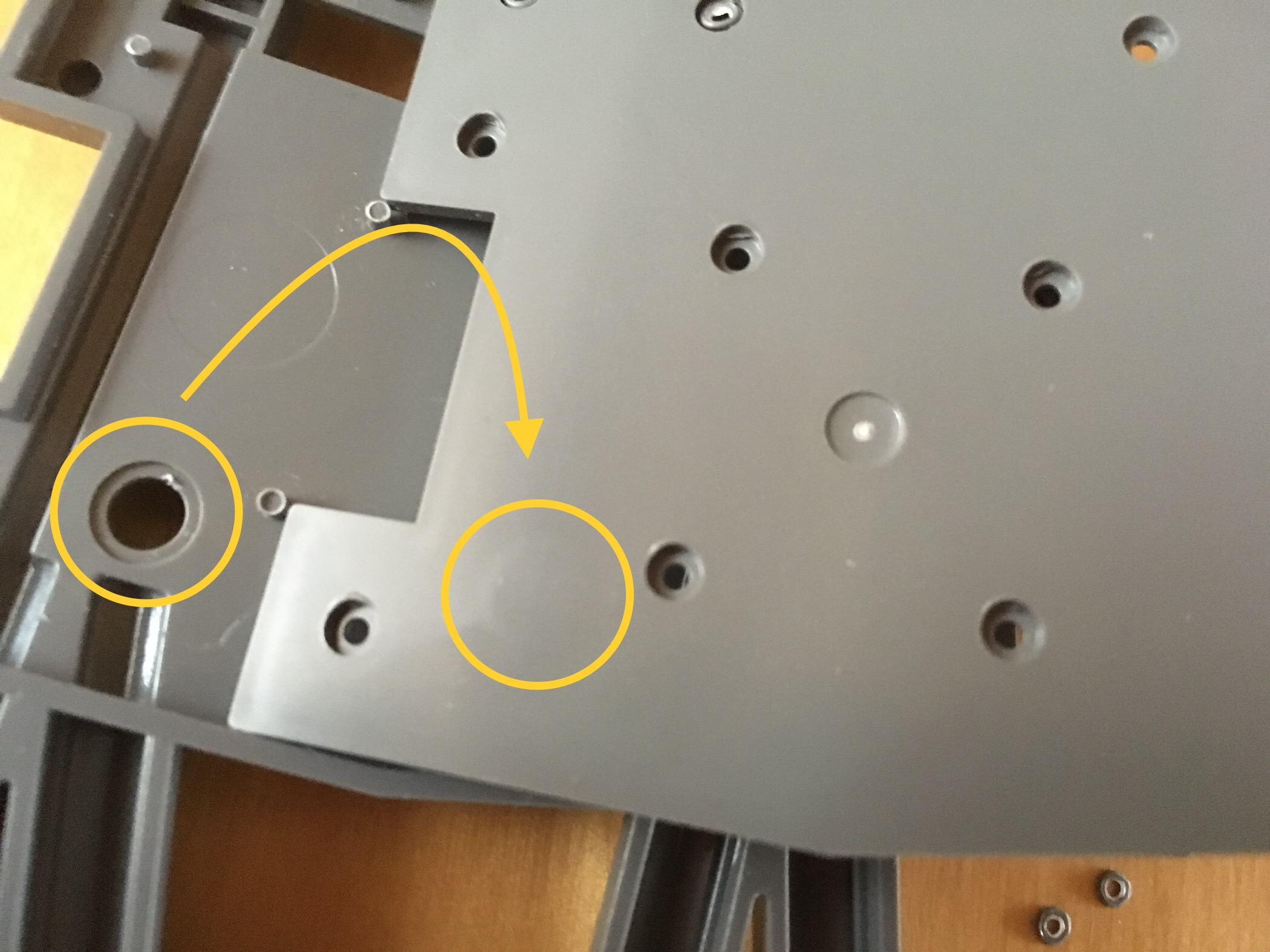 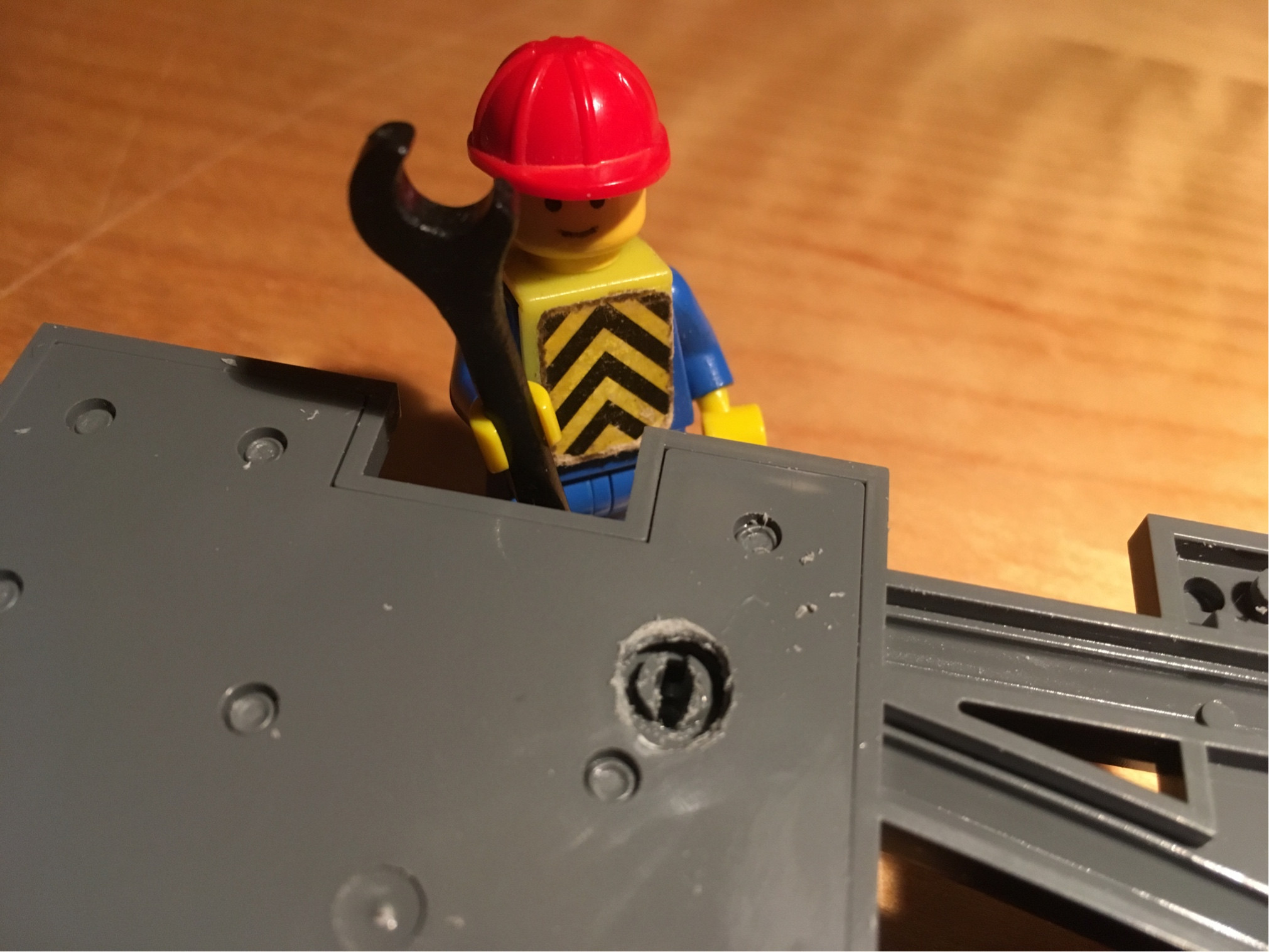 I took a drill bit and started to slowly scratch off some of the plastic. Once the tip was through, I finished off the rest with a scalpel.

Take your time! The plastic is quite thin and the peg's right under it.

I could now easily access the peg with my pliers and push it out. I adjusted the spring and lined everything up.

This might also work, but I don't recommend it. I gave it a try. It's way too fiddly. 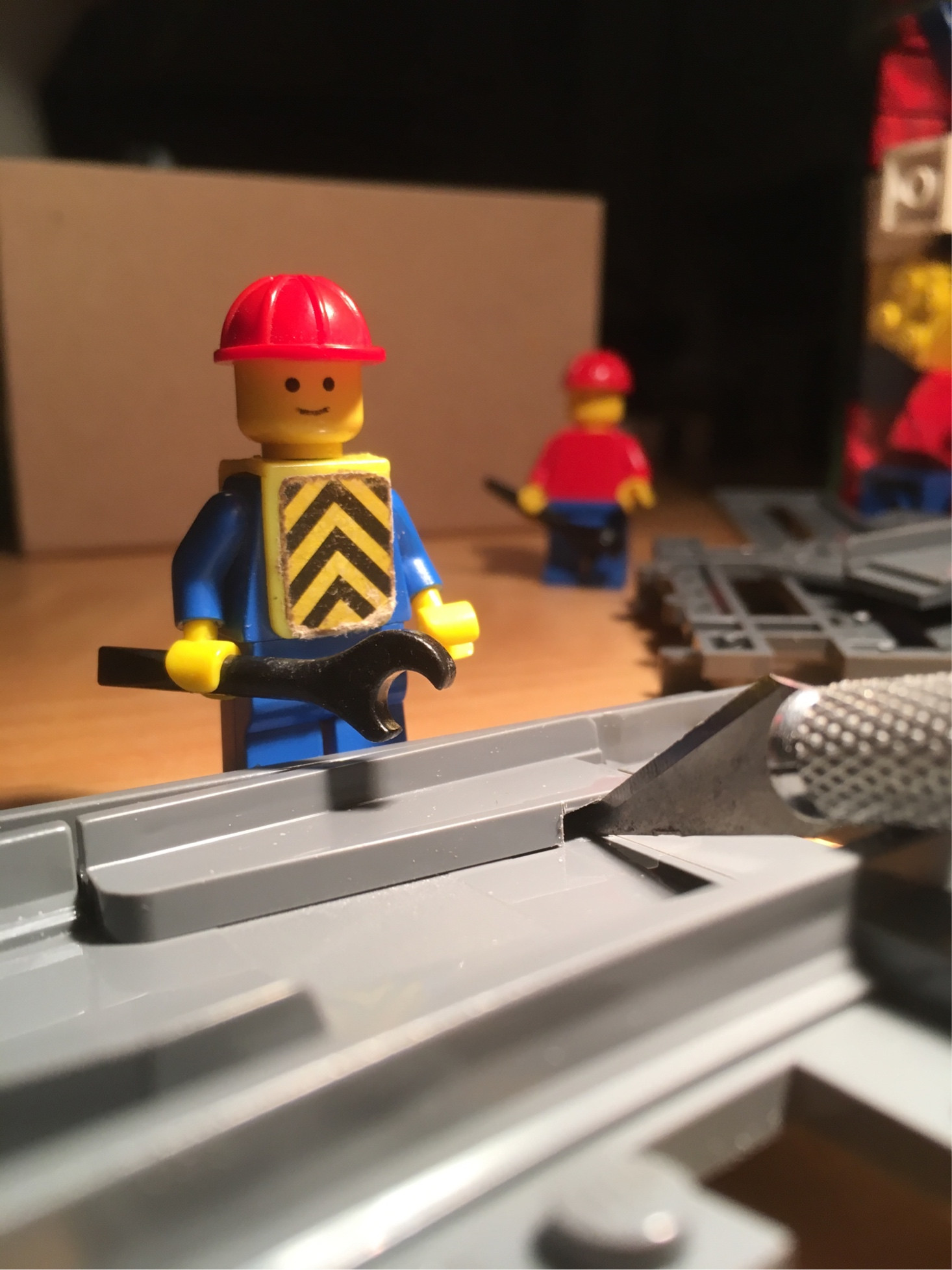 Take a scalpel and cut a hole in the side of the switch. Now you can take a peek inside. See if the tooth is off-center. If so, try to lift the corresponding leg of the spring with a needle. Good luck.

Okay, this post is closing in 2 years old, but I have found it looking for a solution to my problem, so others may find it too. I found out two important things:

Not the answer you're looking for? Browse other questions tagged trains tracks or ask your own question.

16
What advanced railroad features are possible with the Lego PF train sets?
11
What is the maximum distance between fixed train wheels?
12
Software to do Duplo train track layout?
5
Small LEGO train sets on narrow gauge track?
3
What kind of track is the Emerald Night set compatible with?
5
LEGO Train - what size cork track bed
4
What part in LEGO digital designer can be used for a tank track?
5
Is the Lego Duplo Track System being discontinued?
13
How to overcome a roller coaster track gap of a length of 1 or 2?