Are there plans to release new trains for AFOL?

I just built the Maersk train, what an amazing model! I did a little research and found that it was released in 2011 and the Emerald Night was released in 2009. Given the two year gap it seems reasonable to assume there will be new train in 2013. Does Lego have a schedule or patterns for this kind of thing?

With the exception of evergreen themes like CITY and Duplo, it's not easy to predict when sets are released. Based on trends of the last 11 years, I've included the last 20 train sets that have been released in a table: 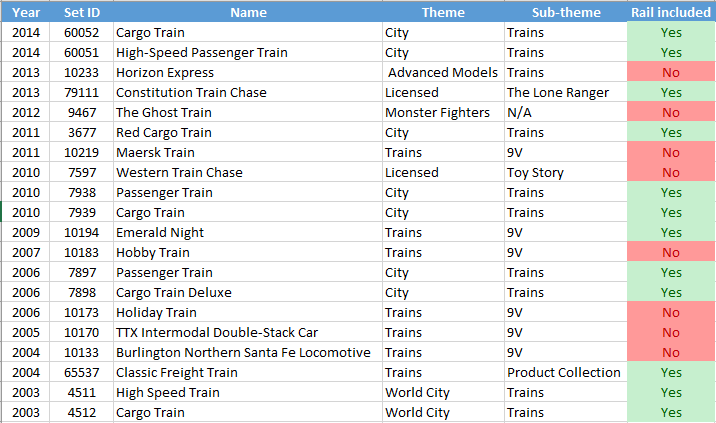 At least one train set has been released each year apart from the year 2008. The table marks an average of 1.66 train sets per year. It's fair to assume that a new train set will be released in 2012 or 2013.

Duplo, accessories, motors and track sets not included. I've included the Western Train Chase from the Toy Story theme, The Constitution Train Chase from The Lone Ranger theme and The Ghost Train from the Monster Fighters theme which you may wish to exclude as anomalies. The right-most column marks which sets were sold with track.

There is a new cowboy set based on the lone ranger film coming out this year-summer 2013, looks really good for younger generation but thats it for the moment- not really a afol kit as such. info came from brickset- there were some pictures too, i think the article was about three months ago.

The Red Cargo Train is the most recent train set released after the Maersk Train.

Not the answer you're looking for? Browse other questions tagged sets trains afol or ask your own question.

6
How hard is it to convert the new(ish) RC/PF trains to 9V?
4
Are there any AFOL clubs in the Atlanta area?
14
Are there LEGO sets designed for adults?
4
Why are new LEGO bricks softer than old ones?
10
Battery for Trains
7
How can the new LEGO pneumatics be used for trains?
4
Is there an alternative replacement motor piece for 4.5 V Trains?
10
Website with layout plans for LEGO Duplo trains?
4
Are there more instructions for LEGO Architecture Studio?
5
Is there a hobbyist standard for Trains track modules?