What is the rarest LEGO set ever produced?

Is there a general consensus on what the "rarest" LEGO set of all time is? And if so, then what is it?

To clarify, of the sets that at some point were for sale to the general public, which one is the hardest to acquire? Tour and company exclusives should not be included, as they were never "produced" to the general public. As far as what quantifies "rarity," price, number produced, current avaliability, or etc, I'm not sure, and that's why I'm asking if there is a consensus on this.

I don’t think there is a consensus, as much as there isn’t a consensus of what constitutes “rare” (is it availability at release, production volume, current market availability?) or what is considered a “set” (is a collectible minifigure a set?). Also, how far back do you want to go? Are LEGO sets from the 50s and 60s included, even the one-piece cars?

From recent LEGO offerings, I think the Batpod is a good contender. Only 750 were available (but a few more popped up at the launch of the new VIP Rewards site, so there might have been up to 1000 of these made).

LEGO made some pretty rare models in its early days, such as the 1957-1958 Opel Kapitan, with only 8 copies known to exist (according to LEGO historian Gary Isztok). 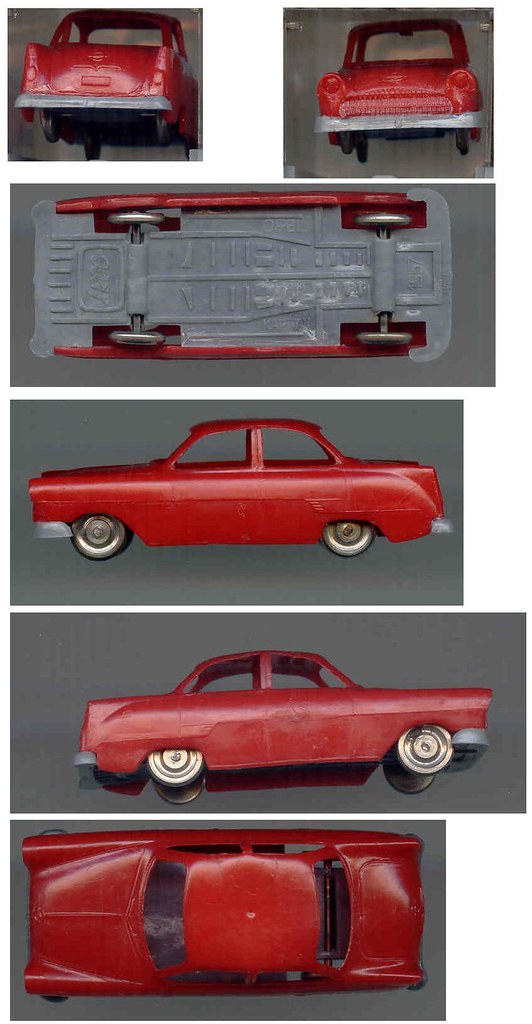 This question is nearly impossible to answer with all the variables. You might consider refining your question to a more realistic scope by eliminating sets like "Inside Tour Exclusives", Comic Con Exclusives, single minifigures like the gold C-3PO, or employee exclusives.

While probably not the "rarest" set out there, the 5004590 "Bat Pod" is annoyingly rare. Sure you could piece one together, but getting one with the box and instructions is pricey.
(https://www.bricklink.com/v2/catalog/catalogitem.page?S=5004590-1#T=S&O)

Some of the old HO scale cars in certain colors are extremely rare. I would think that many of the old piece packs/boxes are probably hard to find and/or buy.

Related: What is the rarest LEGO production element (colour/shape combination)?

19
What is the rarest LEGO production element (colour/shape combination)?

23
What was the first set produced by The LEGO Group?
17
Where can I find a list of all LEGO sets ever released
11
The most amount of pieces [ever] per set
6
Tips for getting enough bricks to make a MOC with unified style
8
Were there ever any smaller sets, marketed as being combined to create a large official set?
2
What to do with a 25K pc collection?
25
What LEGO set has the biggest box?
11
What LEGO set has the smallest box?
10
What was or is the longest running Lego set?
8
What was the first Christmas themed Lego set?