How to distinguish between objects using a sonic sensor?

I am trying to find a ball in the field, grab it, and drop in the specified area. I'm using an ultrasonic sensor on the front of the robot. 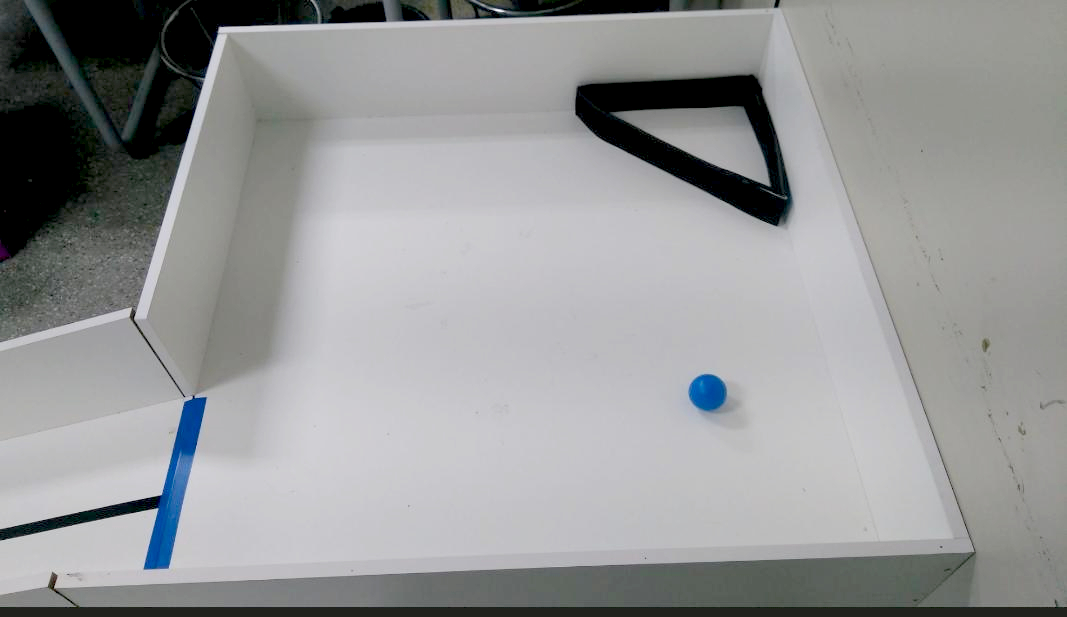 My current solution for locating the ball is: Turn 360 degrees and find the closest object. This part works.

After obtaining the ball it needs to be dropped in the reserved triangular area. What can I do to make the sonic sensor distinguish between the ball, walls, and the triangular drop area?

It's been quite a while since I've programmed a robot, but using only the sonic sensor does make it a bit more challenging. Also, not knowing anything else about the robot you've built (it's size, other sensors & their location, the ball grabbing mechanism, etc.) it further complicates any possible advice.

That being said, the only solution I could think of would be to use the opening/doorway to the room as a reference point for the robot. The sensor should be able to locate it since it's "open", and the robot sent towards it. The line on the ramp leads me to believe your robot has a color sensor for line following, therefore should be able to detect the line at the doorway once it arrives. This will also allow the robot to "true" its location, which would allow rotating "x" degrees to have you pointing directly at the drop-off point. Then straight forward and (?) because I have no idea how your robot even picks the balls up or drops them.

My other solution would be to have a mechanical release lever for the ball. The lever would be positioned so only the low wall of the triangle could push it. This would be a much more simple solution in theory.

Not the answer you're looking for? Browse other questions tagged ev3 programming robotc sensor-ultrasonic or ask your own question.

4
What is a normal range of reading of the Light Sensor using EV3 Raw Sensor block?
4
How to minimize the impact of erroneous sensor readings?
4
How to program light sensor to follow moving light using NXT
8
How can I rotate an EV3 motor an exact number of degrees using RobotC?
1
Bluetooth communication between computer and nxt using RobotC
2
Can I identify the colour of objects 5mm in diamater with an EV3 Colour sensor?
7
How do you program mindstorms to keep doing a task until either the IR OR the colour sensor state changes
2
How to use the ultrasonic sensor on mindstorm NXT
3
Get robot to face perpendicular to nearest object, using the ultrasonic sensor in NXC?
4
When using pi * distance between wheels/tracks, how do I measure distance between wheels?