What's the time on the LEGO clock tile?

I am reasonably confident that this tile is meant to be 2:57:38, but I am wondering if anyone knows why this time might have been chosen? 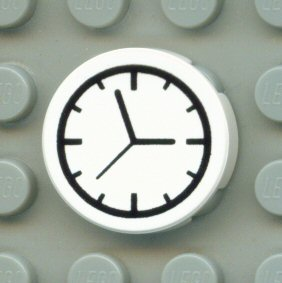 I also recognize the Disney clocks all have a different time (11:53).

Addendum: Why did I ask this question? Earlier this year, the LEGO Xtra line included a sticker pack, and it included this clock face, scaled up for a 4x4 stud circle. 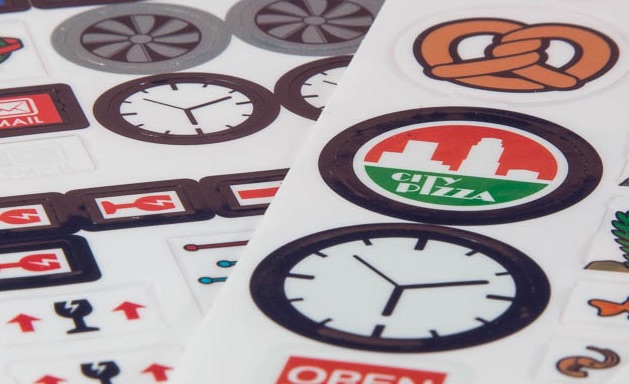 I found myself wondering if this sticker pack was a tribute to the 6000 ideas book. On re-exaiming the sticker sheet in the 6000 ideas book, the clock sticker is set at 08:00:20. It almost looks as if the 'newer tile' that we have been speculating about is similar, but switching around the positions of the large and small hands, and altering the position of the hand pointing towards the 8 slightly.

I love the idea of "School's out o'clock",suggested by some below, but could it have just been a transcription error by a graphic designer in the early 80's? Or indeed a 'correction'?

Or is it just a way of having the hands roughly equidistant apart on a clock face?

Okay, I didn't call/write LEGO for answers. This is just speculative guesswork (and I should be ashamed).

First off, sorry, for not giving you time to explain the full relevance of the Disney clocks with regards to your question. There are other clock patterns besides this pattern, and the "Just-Before-Midnight" Disney pattern.

So, I was trying to get your connection, until I thought about what you wrote, and what I thought in my mind.

You wrote the Disney clocks all have a different time (11:53). I thought in my head "Just-Before-Midnight", because in many fairly tales, Midnight, is the magically important event.

So, it got me thinking: If I were a Danish LEGO designer, and I was making toys for school aged children, then what would be a magically important event to a grade schooler? If an adult's time could ever be important to a child, what time would that be?

Hmm, maybe the few minutes before 3:00pm, the time school lets out and for them, the real magic begins?

So, I'm guessing, 2:57:38pm might be the same "Just-Before-The-Magical-Event" subconsciously embedded in every grade school boy or girl's head, and some random LEGO designer had the insight to try and capture it.

My search for information pertaining to the history of this printed piece turned up no results. Not to say there isn't any, I just couldn't find anything. I honestly never gave it much thought before and assumed they simply chose an aesthetically pleasing arrangement of the clock hands.

I found that this part first appeared in 1983 on set# 7824 "Train Station". This set and the next two released with this part (sets 6392, 4554) all show the clocks displayed as the time you mentioned, 2:57. This would seem to suggest that this was the time originally intended, as you had speculated. These sets, released between 1983 to 1991, had similar "travel" themes which made me question if 3:00 was a common time for trains and planes. The first set, #7824, DOES have 3:00 listed on it's schedule sticker. But, the next two do not.

Then, interestingly enough, in 1996 they were consistently changed for the next 6 sets to 11:43-ish, until 2004. Then, in 2007, they seem to become somewhat random in how they're oriented in the sets. I made a picture compilation of the first 16 sets to include this piece, in order of date released, with the orientation of the clock shown in the lower right: 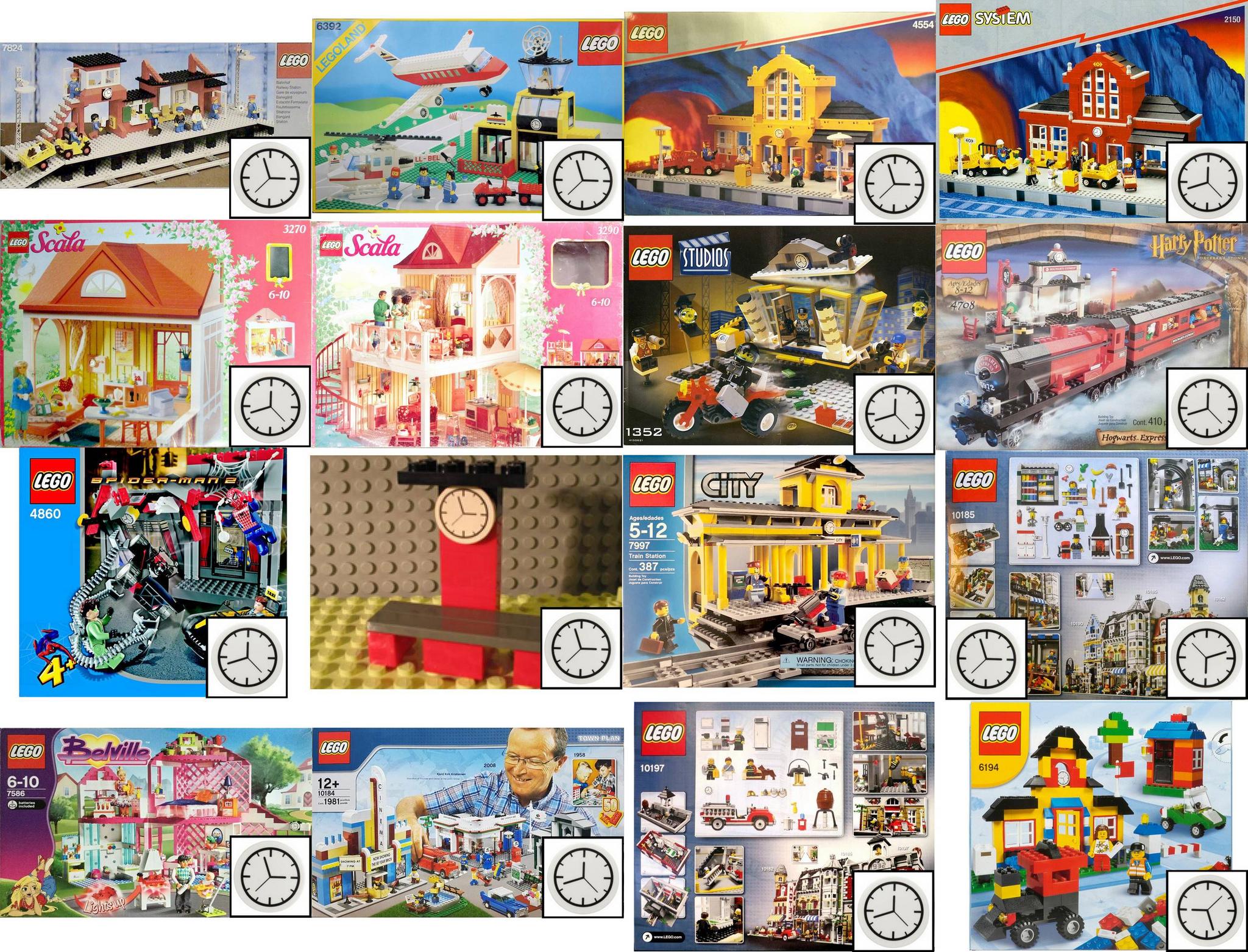 I also was curious about other clocks that Lego has released in sets and if there was any sort of consistency with the times. A quick search on Bricklink for "clock" under "parts" brought up a very long list of pieces depicting a broad range of times:
https://www.bricklink.com/v2/search.page?q=clock#T=P 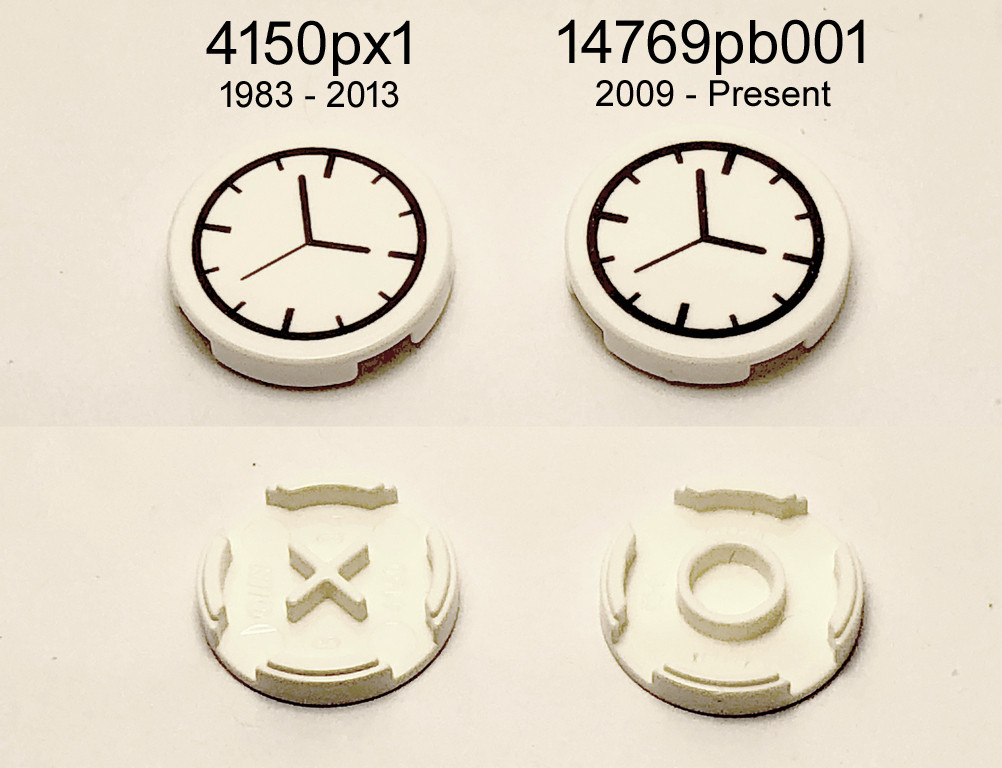 Lastly, I totally agree with the speculation by Rin Rio-Oki of it being the "magical time" of being released from your tormentors aka "school". Regardless of whether any "facts" were to surface relating to the true origins of this piece, this theoretical meaning gives it character. Being a big Calvin & Hobbes fan since the 80's, I remembered there being a few comics that depicted the time Calvin got out of school. I eventually found a couple of the comics, and it turns out it was 2:30 instead of 3:00. My dream of naming this Lego piece the "Calvin Clock" quickly faded. 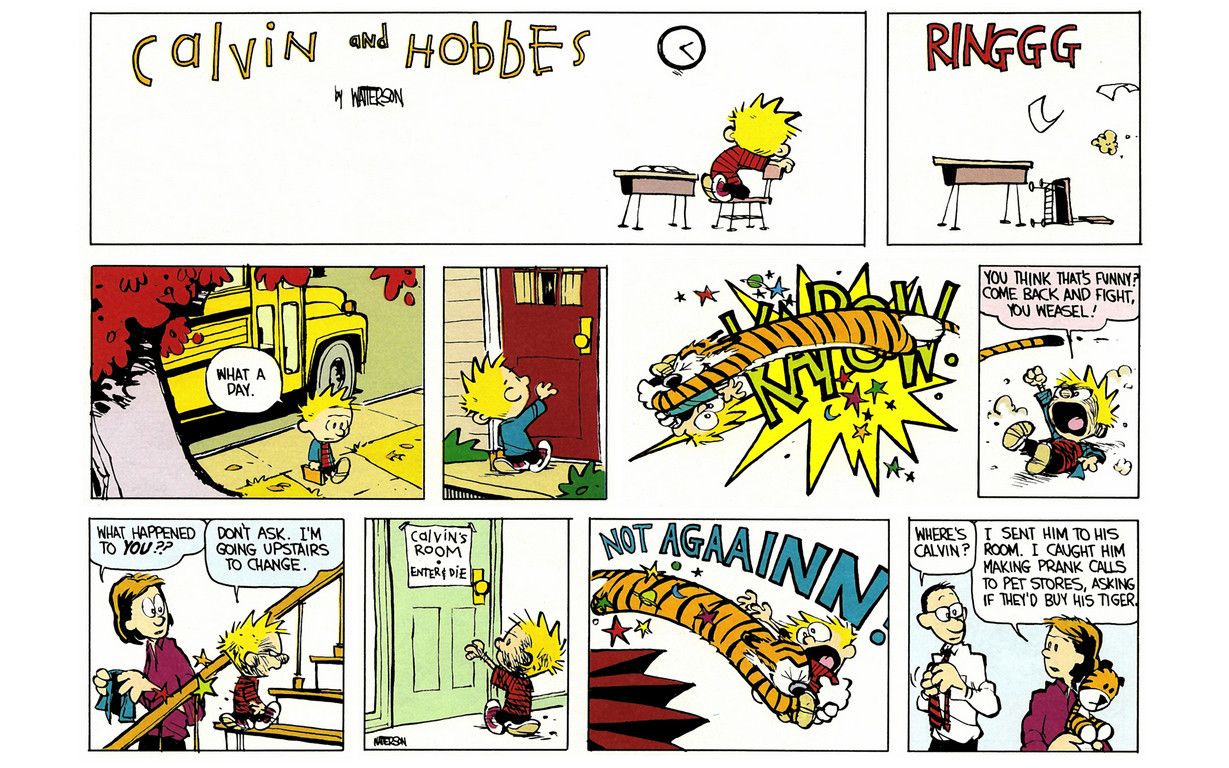 All rights to these comics belong to Bill Watterson. It is my hope that by using them here for a smile, and not for profit, that no infringement has been made.
https://en.wikipedia.org/wiki/Bill_Watterson

Not the answer you're looking for? Browse other questions tagged history disney or ask your own question.

16
What sizes of bricks (building scales) have carried the Lego brand name?
23
What was the first set produced by The LEGO Group?
7
Has TLG ever produced bricks without the LEGO branding?
4
Does anyone have a picture of the Lego Club alphabet code from Bricks and Pieces magazine?
4
How can I find the unique parts in the 71040 Disney Castle?
7
Significance of the switch from Legoland to Lego System?
5
Why is LEGO kit name not on the box or booklet?
6
Have LEGO stickers changed materials over time?
3
What is the history of the set numbers of Lego sets through time?