Where and when did the straight block letter LEGO logo appear on brick studs?

The LEGO logo that appears on the tops of brick studs has had several styles over the years. In the US, when Samsonite began manufacturing LEGO bricks, they apparently made some alterations to some of the molds they obtained from LEGO, resulting in occasional odd bricks that had both the older and newer style logos on the same brick: 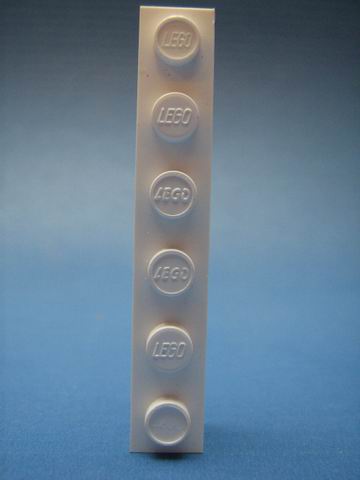 This brick shows the two main styles of logo, the earlier one with thick, rounded lettering and an open O, and the later style with thinner, italic lettering that is very similar to the style used today. There have been slight variations in the size and orientation of the logo, but these are the two main styles.

I have a few pieces, however, that have another distinct style: 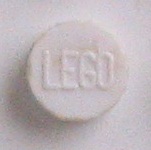 This is also a thinner style, but is not italic, like the modern style. The pieces I have seen it on are white plates with the modern underside - not the old waffle type.

I want to know roughly when this logo was used - It would appear to be later than the old style logo, but concurrent with the modern logo. I am also wondering how long it was in use, and whether bricks with this style logo were produced in a specific place; i.e. whether they are Samsonite from the US or Canada, or distinct to one of the European manufacturing locations.

The pieces I have that display this logo are white 6x8 plates with Pat Pend on the underside in block caps. This style plate first appeared in sets in 1961, and I believe by 1976 most of the Pat Pend molds were either replaced or had the words obscured. That narrows the date range down somewhat for this particular piece.

If anyone has examples of other pieces with this style logo, especially if they are known to come from a certain set, that would be helpful in answering this question.

LEGO appeared on the studs for the first time in the late 1954, then it was re-designed a lot during the years, becoming the stud we all know.

The not-italic stud of the photo was produced between 1960 and 1963. You can easily exclude 1963+ noticing that it's not the same exact plastic of the modern bricks (ABS was adopted in 1963).

Hope this helps. P.S. I'm a huge LEGO collector and I'll be glad to share my expertise here and learn from other passionate people.

1
When did bricks start to have the LEGO Group text engraved on them?

12
What was wrong with monorails?
7
Has TLG ever produced bricks without the LEGO branding?
3
Are there LEGO compatible CAD Files For Injection Mold Manufacturing?
8
Did LEGO ever make bricks without the LEGO logo?
6
Does this 2x4 brick exist?
10
Different surface roughness of tiles. Quality issue?
11
How To Sort Out 3rd Party Technic Clones From LEGO Originals?
11
Which parts do not have the LEGO logo stamped on them?
10
What was the purpose of the triangular corner marking and the "points" in Lego instructions starting around 1992?