We changed our privacy policy. Read more.
This site is currently in read-only mode; we'll return with full functionality soon. Follow @StackStatus or visit our status blog for more info.

I'm working on a variant design for a MOC that includes a cover over an open area. The new design is based on a suggestion for a "cookie jar" style design made in another of my questions, LEGO Enclosure Clasp. However, I'm having difficulty identifying which bricks to use to properly implement the idea and need a bit of inspiration. Could someone point me to an example of a set or other MOC design that uses something like brick #2653 (the 1x4 "sliding" piece) in conjunction with a rubber band to generate friction against the side of another piece (if such exists)?

Here's a very rough diagram of what I'm thinking of. The rubber band (red) goes around the inner square and fits into the groove in part #2653 (yellow) but "sticks out" enough so that, unless force is applied to push them past the grey bricks, they should generally stay in place. 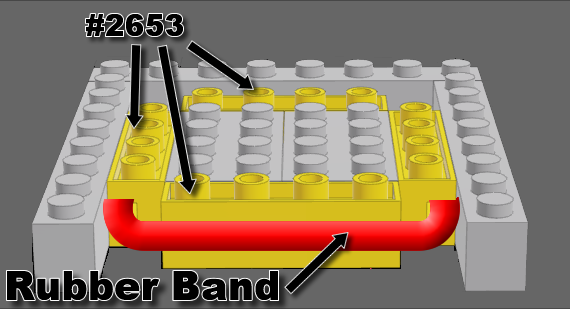 My "problem" - and the reason I'm looking for guidance here - is two-fold. First, I have a relatively large (14x16) area around which I need this "gasket". Obviously, if the rubber band were to go around the entire thing, there would need to be some sort of reinforcement behind the grooved bricks to prevent the tension of the rubber band from just pulling them out of place. But, I'm thinking about using a few smaller sections (like one or two of the 1x4 end-to-end), each with their own rubber band. Perhaps a few of these around the perimeter would be sufficient?

The second is that I'm doing all of this virtually through a CAD system before I go looking into purchasing physical bricks and pieces I may or may not need. I've made several variants of the MOC with different ideas for how to implement the cover to refine my ideas as much as possible before I "pull the trigger", so I'd really like to see how someone else might have addressed this particular situation.

I personally would steer clear of a "cookie jar" setup. The very suggestion of it's inherent qualities suggests something that wasn't meant to transport, but rather sit on a solid counter. The rubber bands aspect seems potentially problematic as well. Finding one that perfectly fits could prove difficult, and their elasticity would likely try to pinch in-between the tolerances of the bricks. A rubber O-ring, being thicker and firmer, would be better suited for this task. Personally I would opt for simple proven concepts that don't require guesswork and avoid potentially temperamental solutions. If you did manage to figure out a working snug fit, you then would need a big gaudy handle sticking out to remove it with.

That being said, I threw together an example of a proven method for a removable door. It would also incorporate your original idea of wanting a snap for peace of mind. 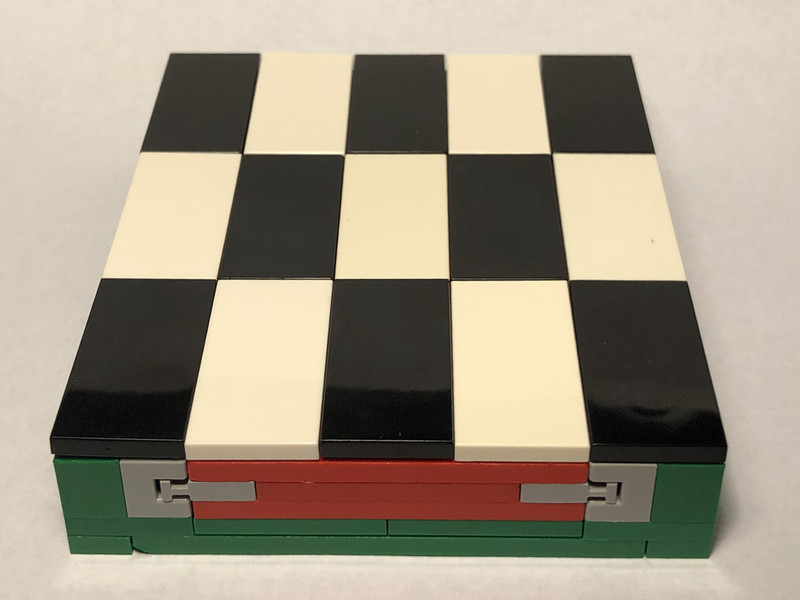 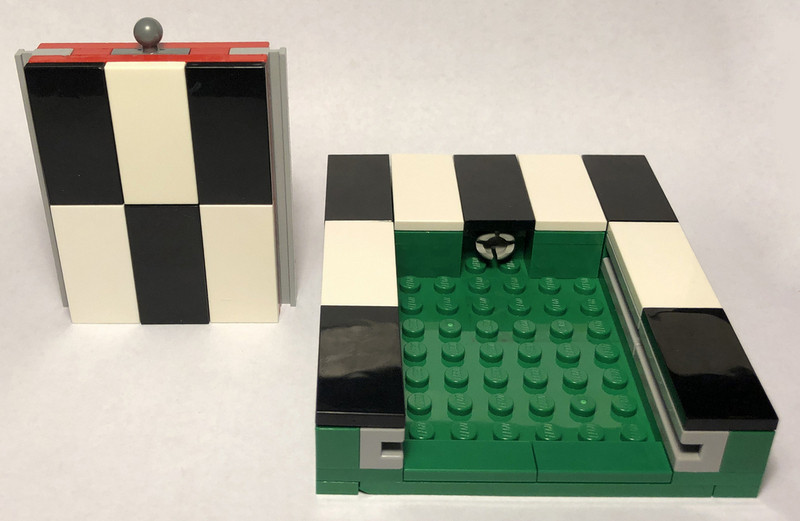 It's just a very basic design to prove a concept, one that's easy to improve upon. One nice thing about this design is that you don't need a handle to open it, it un-clicks with just the friction of your fingers.

If you really want a cookie jar style lid I would incorporate a few studs onto a tiled edge, similar to how Modular sections are held together. I would suggest the lid have an inner lip to increase stability. Again, proven methods.

This site is temporarily in read only mode and not accepting new answers.

Not the answer you're looking for? Browse other questions tagged moc .

7
What is the official term used for building MOC models?
2
draw program for LEGO MOC models?
9
Help in identifying elements used on LEGO Batman movie's Daleks
0
Publishing instructions for MOC based on Lego Technic set
1
LEGO Enclosure Clasp
13
In LEGO: How to build a revolving magazine rack for 2x3 tiles?