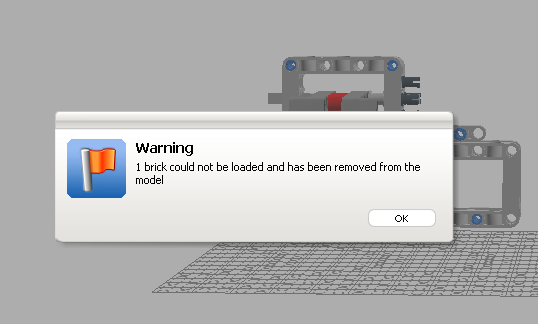 UPDATE May 2020: These links are broken.

I think I might have a more elegant solution rather than downgrading to LDD 4.3.11 :

You just need to replace "Assets.lif" file in the 4.3.12 installation folder with the same file from 4.3.11 version. I happen to have this file archived here. After you replace the file and restart LDD, all bricks will be available and all your previous creations will open without errors.

If you don't trust my version of the file, you can do it yourself easily, since the "setupldd-pc-4_3_11.exe" distributive is essentially an archive and the file can be easily extracted with tools like WinRar or 7-zip from there.

Why choose file swapping instead of downgrading: in version 4.3.12 LEGO has removed the Flash dependability (or Silverlight, i don't remember now). That resulted in more convenient install on latest Win 10 systems, which is nice, since I personally had trouble installing 4.3.11 on a fully updated Win 10. Unfortunately LEGO developers also somehow corrupted the Assets.lif file that contains the brick library. It seems that the file got simply truncated at some point, which is obvious when you compare the file sizes of the 4.3.11 and 4.3.12 versions.

2
Current LEGO Digital Designer download is missing a lot of parts
4
Has anyone noticed paint tool buttons missing?
0
LDD Update Date?
1
LDD part library missing
10
Identify this license plate holder piece
5
What version of Lego Digital Designer has all the parts that LEGO ever added?
2
LDD lacks almost all functionality
0
Where is the 15068 PLATE W. BOW 2X2X2/3 in LDD?