Yesterday I had the basic driving robot with two large motors, but I could not get both motors running at the same time. I had the tank control programming block, with both motors set to 50% and when running the program both motors would start and one would continue spinning, but the other would stop after only 1 or 2 degrees of rotation.

First I thought it was a problem with the motor, so I replaced it with another motor from another set, but the problem remained. When I switched the ports it was the other motor that would not keep running. I tried different ports, changing the cables and restarting the brick but nothing helped. Checked the rechargeable battery to see if it was a power issue, but that was full. I did this in a class with several other EV3 sets using both large motors and none of the others had this problem.

I then used the programming block for a single large motor and tried both separately and that worked fine. But when I put two of those blocks after each other to start the motors sequentially again the second would not run after an initial click.

When I wanted to troubleshoot it further after I got home everything worked fine, which makes it even stranger. That also suggests it was not the battery box as mentioned in this post.

So I hope maybe someone has seen this before and can tell me why this happened and what to do should it happen again.

EDIT: I found the faulty EV3 (it was number 9, not number 6....). So I was able to do more troubleshooting. Attached a screenshot of the various programs I tried with comments.

Any thoughts on how this can happen?

Most people with port problems have port C failure. I had similar issue. In my case it was factory defect: SMD chip (U26 on board, see image and HW dev kit pdfs) was soldered with a twist and had two legs broken, but they touched the chip and sometimes signal was getting through. They are used for tacho input. So in some modes when it runs fullspeed it works OK (remote control or built-in motor control), but when it is required to turn for degrees or rotate with a given speed it just spins fullspeed without a stop since it does not getting tacho from the connected motor. 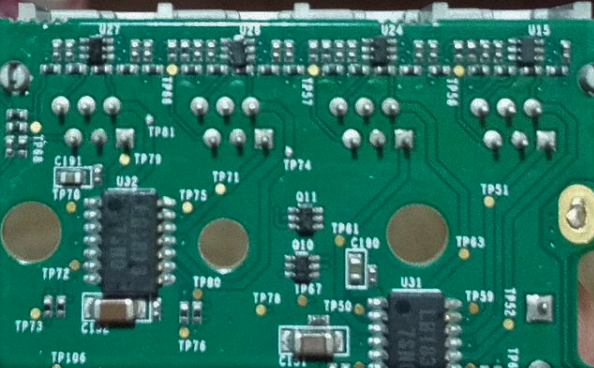 I replaced the chip (74HC2G14GW-G) and now everything works fine. I don't think they solder chips by hands, so it could be some defective batch.

In the mean time Lego has confirmed that the brick was broken and replaced it.

Not the answer you're looking for? Browse other questions tagged ev3 motor or ask your own question.