I'm wondering about the game sticker featuring a ghost. It seems like it is also a reference to another LEGO game, but I don't know what it is.

Here's a picture I found of it, it's the purple sticker on the left.

Is this also a reference to a LEGO game?

I'm fairly convinced that it is not a reference to any other past Lego product, but was designed entirely for this set. It's hard to prove a negative, so while I list three reasons for this, none of them is a complete proof and all these could be false.

As far as I know the only Lego games to feature ghosts were either based on the Ghostbusters franchise, which uses different aesthetics, or had different ghosts (like that of Vitruvius, various characters from Star Wars, Harry Potter, Lord of the Rings, or the characters Ghost Rider or Beetlejuice), which do not look like the ones featured on these stickers.

Which leads to the second point: there is the computer screen in your picture, but a laptop is included as well with a similarly themed screen: 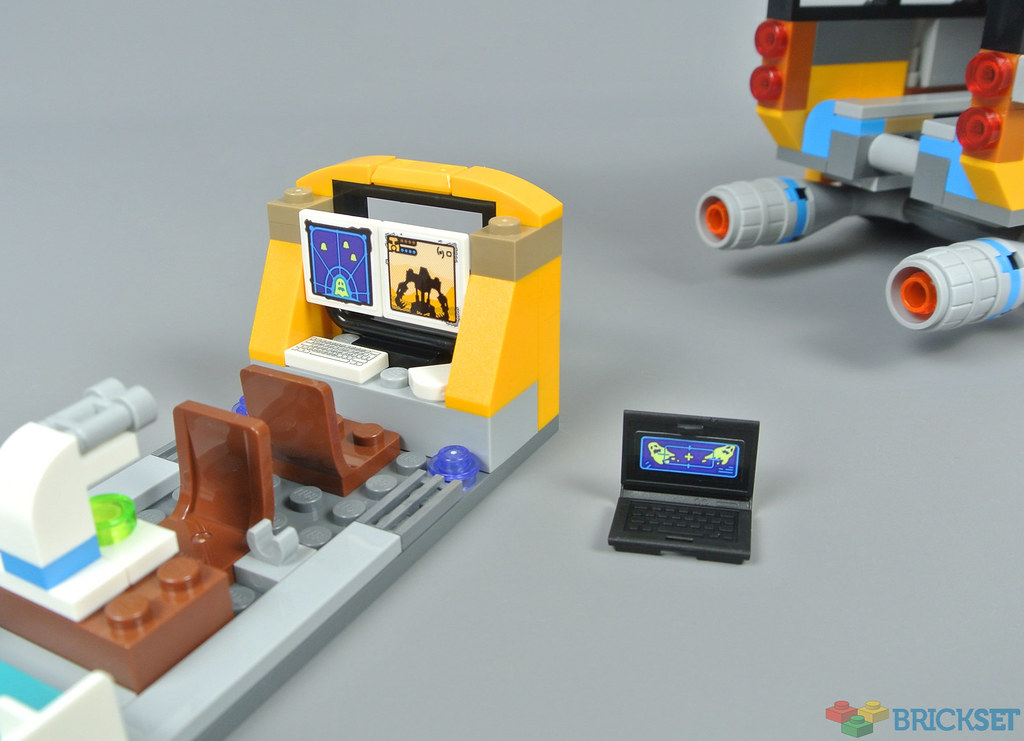 It would be strange to include a reference to the same thing twice in the same set, but if course it still does not prove anything.

The third point is much more intangible, being based more in the reason of meta-knowledge. When Lego designs a set like this, it is primarily meant to be played with. In this set, the focus is on catching ghosts, any Easter eggs are of secondary importance at best. But if the green ghost screen were a reference, that would make the other similar one a reference as well, resulting in a set with no screens dedicated to the primary play function. Which, of course, while highly unusual, would still not prove anything.

So these are the reasons for my conviction that these are not references to anything from the past but were created specifically for this set (or product line).

Or one might argue that the sticker is referencing the Lego Hidden Side application, but that would be stretching the definition of a reference, as the application is specifically designed to work with this set :)

According to the set designer for the Paranormal Intercept Bus set, Niek van Slagmaat, the released product contains 3 references in total, which he identified in a presentation at BrickFair Virginia 2019.

You can skip ahead to the 22:43 time to hear him talk about the sticker sheet and the references it makes, which are listed below. 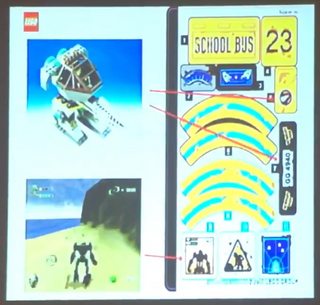 He also identifies the purple sticker in question as a radar screen.

I decided to just pick whatever Bionicle video game I could find and this one worked quite well so we ended up putting it on the secondary screen so while she's hunting for ghosts on this computer here using the radar she's also just playing some Bionicle game off on the side.

This confirms this screen is intended to represent the world in which the set takes place, and not reference another old Lego game.

27
Why do some sets contain parts of an unrelated colour that are hidden on the final model?
10
Why are 2/3 height bricks with studs on the side 2 studs deep?
3
What are the bricks in this picture/video?
3
Opposite brick of Brick, Modified 1 x 2 with Studs on 1 Side