How create a custom Roller Coaster? Where I can get the track pieces?

For some random reason, I watch some videos on YouTube showing a "Roller Coaster" built using Lego.

I never enjoy to follow Lego instruction, and I always prefer to build something my own, mixing any Lego bricks from any set.

I only found that set #10261, which wasn't used in the video. But is the only official Lego that I found, but it's too much limited, and I can't imagine built anything rather than the intended build. Buying multiples times the same set (5x #10261) appears too much expensive and still restricted.

I found another non-Lego set, called "CoasterDynamix Roller Coaster Factory", which allows some creativity. However, I can't find it to buy.

What is the recommendation for the track? There's any set like the old "CoasterDynamix Roller Coaster Factory"? Also, since I don't have any brick, what set of random blocks, for the support structure, is better?

You can buy tracks directly from LEGO. You go to LEGO service web page and follow steps below:

Note. 10261 Creator Roller Coaster set does not have every type of element within track system. You may use part numbers provided below to look for individual tracks using the option on the right side in Step 4.

Alternatively you can purchase all the pieces on Bricklink. Look for:

There's already a good answer for where to get the track pieces, so I'll tackle the reset.

Also, since I don't have any brick, what set of random blocks, for the support structure, is better?

If you are relatively new to building with LEGO, building a custom roller coaster design may be a really difficult first challenge.

There aren't any official LEGO sets aimed directly at building a custom roller coaster. A set of random bricks would be designed so that you can build a variety of things, not one specific thing. To build a structure for your roller coaster you will probably want a bunch of 2x2 bricks. Buying those pieces from a BrickLink seller with a sufficient quantity of them would likely be cheaper, as the price-to-part ratio for these relatively generic pieces appears to be lower than that of a set with a variety of bricks, many of which may not be that useful.

LEGO uses the round variety of 2x2 because they also use Technic axles to make it stronger. 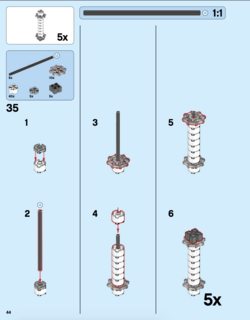 You can look over those instructions to see how LEGO builds their.

However if the roller coaster isn't too big the square variety would also work. You will probably also need a variety of 2xY plates to build structures to connect your different columns.

Not the answer you're looking for? Browse other questions tagged building tracks or ask your own question.

10
How can I build a LEGO heart?
6
LEGO ideas (with traditional bricks)
5
Has Lego Box 5508 been discontinued?
3
Resources to learn useful common Mindstorms mechanical construction patterns
6
Articulations : which technique to use on small constructions for sturdiness?
2
Which LEGO set is best suited to build robots?
10
How can I build a brick-built monorail track?
3
Principles of D.I.Y. Minecraft microworlds
8
How can I complete the build of this Lunar lander from the Space and Airport Set (9335)?
13
How to overcome a roller coaster track gap of a length of 1 or 2?