Last Christmas I built an extended Emerald Night train to run around the tree. To get it to work I had to add a second Power Functions motor. I tuned both IR receivers to the same frequency and slowly applied power by keeping the IR remote within the line of sight of both receivers at the front and the back. The major disadvantage to this was it was difficult to sync the two engines because line of sight was not assured.

I'd like to build a larger train this year and would like to find a better way to link the motors. I've think that putting one motor in the back helps with weight distribution, although this idea may be flawed.

What the best way to link multiple Power Functions motors together without having to rely on multiple IR receivers?

Below are some photos that provide more detail about the train in question. 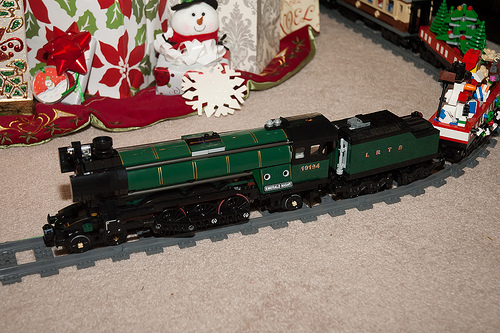 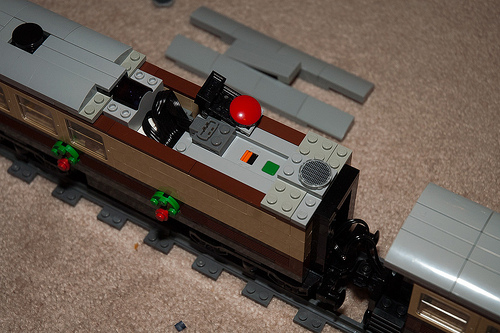 If the motors are far apart, you could simply connect them both to the same receiver using some extension cables. To the best of my knowledge, there is no problem connecting two motors on the same input of one IR receiver.

If you're using Technic motors instead of train motors, as Zhaph said, you'll probably want to have them coupled through a differential so that no motor can stress the other. That's the standard way of doing it in any Technic creation, and since it effectively adds the two input speeds (from the motors), it means you can create some variation in speed very easily.

I did that to power a PF-modified 7740 engine with two medium motors when the only remote available was the simple on/off one: one motor had its speed reduced to 1/3, so the range of available speeds where 4/3 (both motors on), 3/3 (regular motor on, 1/3 motor off), 2/3 (regular motor forward, 1/3 motor reverse), 1/3 (1/3 motor only), 0, and the same in reverse. Was awfully complicated to use the remote to go from one speed to the next, though. And then LEGO produced a speed-control remote and I didn't look back to that idea again.)

Digging around a bit, I found the reference I mentioned:

You can see there he's using 4 M motors from the Power Functions range in pairs. In the comments for this picture he describes the set up as:

Both motors have a 12 tooth beveled gear. The front motor and rear motor of each driver set face in opposite directions, which allows both of the motors' ouput gears to be meshed into a single gear (another 12 tooth bevel) that is impaled by the vertical axle shaft that runs through the turntable.

Jason is powering all four motors from one battery unit, and I don't believe he was worrying too much about IR control.

I put 2 train motors in the red cargo train and it worked well though I didn't add cars to the back . . . my goal was to get it to go up an incline so it could go from the "industrial area" around the tree to, well, a table, where I setup the city. I tried adding the passenger train motor car to the back but that didn't work . . . the weight of the motor cars was too much to go up the incline even without any other cars. Only two motors in the engine car of the red cargo train ever worked and even then it couldn't pull up all of the cars . . . only two little ones or one bigger one would ever make it up. The problem with adding cars wasn't that the motors stalled (which was the problem when there was only one motor), it was that they started slipping. So then I thought I would add some weight . . . but of course that didn't work because more weight made the motors stall.

Learned a lot about physics that week.

0
How can I combine multiple PF XL Motors