I have (or rather my daughter has) a Fabuland umbrella which has been snapped off where it meets the base (probably over 30 years ago when her mum was a child).

I've seen Can I repair a broken LEGO brick with glue?, but in the best case the joint could only be as strong as the original plastic, and this is a weak spot where small hands are likely to use the pole as a lever (the base is an unusual design of slots, just visible in the BrickLink picture, and is a rather tight fit). So I thought I'd reinforce it, perhaps by gluing something like Brick, Round 2 x 2 with Axle Hole as the axle hole will also take a normal flagpole (3.18mm), but the umbrella pole is a little larger. Replacements are several pounds, and some of those are even broken in the same way.

Is there a slightly larger standard I don't know about - or would I be reduce to getting out the drill to make a reinforced version?

One option might be to make yourself an ABS slurry by dissolving a sacrificial part of the desired color in Acetone: 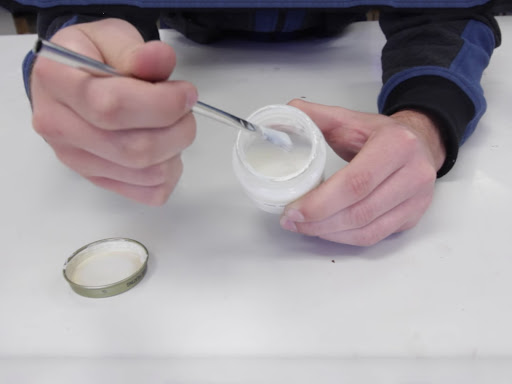 This should be able to bond chemically with the ABS parts for a strong connection, and you'll have extra plastic material to work with, so you should even be able to make it stronger than the original design by building up the area slightly if desired.

You might want to practice on some other broken parts first to make sure that this works the way you expect.

Not the answer you're looking for? Browse other questions tagged repair or ask your own question.

15
Can I repair a broken LEGO brick with glue?

31
How do you repair yellowed or faded LEGO blocks?
15
How to repair leaky pneumatics?
15
Will Lego repair a bad motor?
7
How to repair cracked/peeling decals?
11
How do I repair loose arm joints?
15
Can I repair a broken LEGO brick with glue?
2
Dan I open/repair this Duplo pullback motor?
3
Lego 12v motor axle repair
3
Is it possible to repair LEGO box creases?