Ask Question
Asked 1 year, 4 months ago
Active 1 year, 3 months ago
Viewed 165 times
1
Closed. This question is off-topic. It is not currently accepting answers.

Want to improve this question? Update the question so it's on-topic for Bricks.

While I was programming my EV3 robot on my Windows 10, the Lego Mindstorms software immediately closed, and then Bitdefender Antivirus said that it was some sort of Ransomware. It was Bitdefender that closed the application. It looked like this: 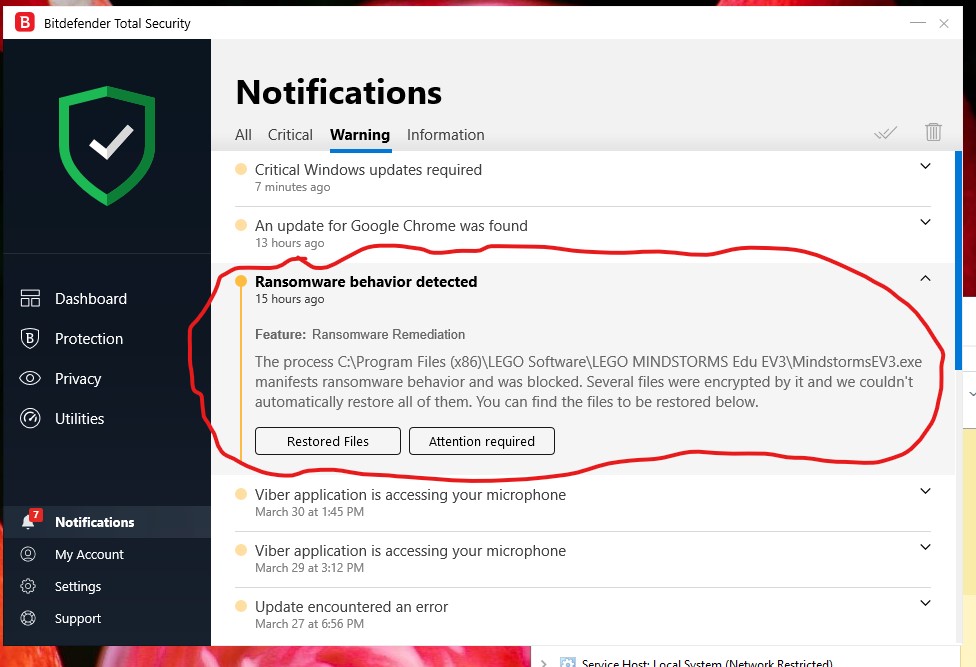 Clicking on "attention required" then shows the following: 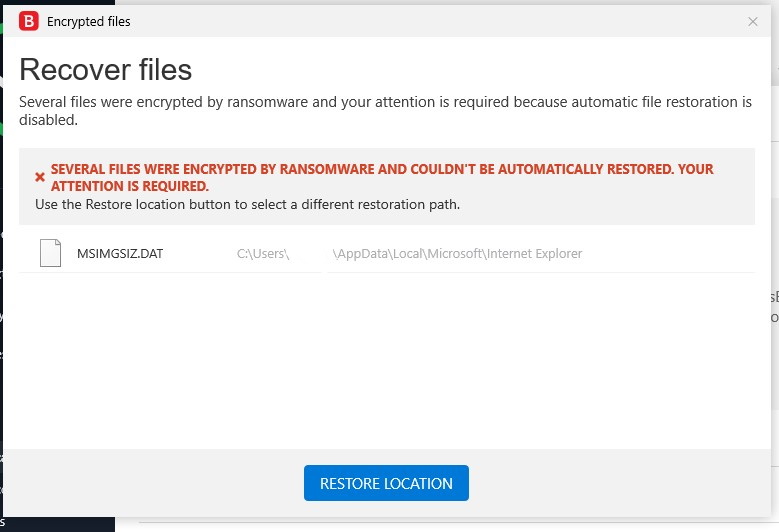 So then I pressed "Restore Location" and stored the file into some random directory without even knowing what I was doing.

Now I don't have this problem anymore, but I seem to be the only person who has ever had it. And I also wonder why MSIMGSIZ.DAT is needed for the Mindstorms software since Bitdefender seems to say that it came from the Internet Explorer.

Is there something wrong with my PC?
Or is this occurring because of the Mindstorms Software itself?

Btw, this happened to me two times in a row.

It turned out to be some corruption with the Mindstorms software, according to Lego. It didn't remember my brick because I used the Lego site to update firmware to a version that the software didn't recognize. Even now it still tells me to downgrade.

Browse other questions tagged ev3 mindstorms or ask your own question.

5
Mindstorms NXT Bluetooth Slow Connecting
5
What can cause programmed NXT 2.0 motors to misfunction when small resistance is applied?
2
LEGO mindstorm - which product to use to make projects mentioned below
5
Lego NXT Exploitation or Vulnerabilities?
2
Starting Lego robotics projects low-budget with the intention of expanding later
6
Use legacy RCX sensors with EV3
8
Capture video stream from LEGO Studio Camera (Logitech USB webcam) in ev3dev?
2
EV3 program runs fine when connected to PC but does not respond when copied to the brick
4
Is there a duplicate/copy paste function in Lego Mindstorms Ev3 programing?