I have installed LDD on my Windows 10 today, and after installing the application it automatically opened up. But I realized that when using the Desktop shortcut, the app can't be found. Here's the given error: 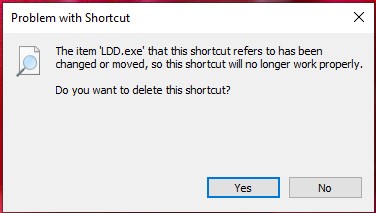 So I used the installer again, and it said that LDD was already installed. But I couldn't find the files anywhere, only the shortcut. So I reinstalled anyway and stored them in a directory I recognized, yet after installing when I checked the directory, it wasn't there. Once again I tried this process, but the problem persisted. I also notice that any LXF file I try to open doesn't do anything and LDD doesn't detect the file when I open it from the application itself. So LDD is quite crippled, tbh.

How do I solve this??

The LEGO Group has announced via a press release they will be closing the LDD site from 31 January 2022, and encourage all users to migrate to Bricklink Studio.

As Phil B commented - you'd probably be better off with Studio now. This was originally developed by a team at BrickLink, and when they were acquired by The LEGO Group made the following statement:

So going forwards, Studio is the supported option. If you feel you really must stick with LDD, please also ensure that you use the last-but-one version, as the very latest version is missing a number of elements.

Finally, ensure that you download the installer from official sources (such as the LEGO CDN as linked in that answer), rather than "free software" sites, which might have tampered with the package.

19
Why can't I reproduce this SD card box in LDD?
5
How to use printed bricks from set 850425 into LDD?
0
LDD not rendering
8
What is the brick limit in LDD?
4
Where are the 2 by 2 turntables in LDD?
5
3D printing LDD model
7
Source of LDD models
2
How do I get unlimited color options on LDD?