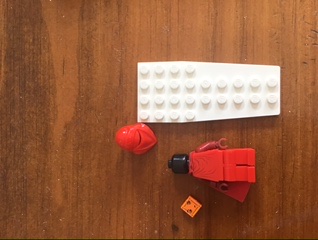 Hi just wondered if someone can help identify a set for us? The best clue I have is a red minifigure with a red cape, red full face helmet & black head (no face). I also have an orange square with a face on it which may go with this figure. Thanks heaps!

These items are from different sets.

Let's begin with the most obvious - minifigure. It is a Royal Guard from Star Wars and there are couple of versions of them. Yours seems to be with arms and hands in Dark Red. Yet, there are still two version of them (depends on the type of cape you got):

Or, it can be Royal Guard with Dark Red Arms and Hands (Spongy Cape) that was part of another two sets in 2016 and 2019.

Next comes a tile. Your picture is tiny, however I think I have identified it correctly as Tile 1 x 1 with Groove with Face with Narrowed Eyes, One Eyebrow Raised and Small Frown (Kryptomite) Pattern in Orange. It was available in two sets (non Star Wars).

Not the answer you're looking for? Browse other questions tagged set-identification minifigures or ask your own question.

7
What lego set is this? Possibly a pirate ship?
5
Verify authenticity of the Star Wars Snowtrooper minifig
2
Can you help identify my new LEGO set? Round glass door, black and red hoods, gray and black with a few red pieces
1
Star Wars set ID 2
4
ID this set: Rocket launch installation?
1
Partial Truck needs to be identified
4
Early 1980s snap together shop/house scene toy
3
Are my LEGO Star Wars Royal Guards with black hands counterfeit?
8
How many minifigs have unique heads?