Is the knight in the new Minifigures Series 20 based on the character in the movie Monty Python and The Holy Grail? 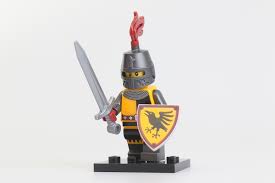 This seems to match my recollection of the major knights from the film, so pretty much probably not: 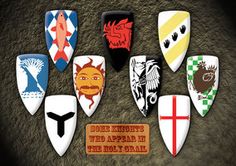 There wasn't a black (sable) and yellow (or) quartered knight, nor a martlet or raven on his shield.

That helmet element (Mini Knight's Helmet Closed) has been around since 2010, and has often been used in tournament and jousting sets, as well as general Castle sets of the time.

23
Is there a reliable way to determine what minifigure is in a LEGO Minifigures series package?
17
How do I make Victorian looking minifigures?
24
What is the male:female ratio of gendered minifigures?
18
Are the LEGO Friends Mini-dolls compatible with Minifigures?
9
Why does LEGO sell minifigures randomly?
2
Buying Individual MiniFigures
6
What is the difference between the plastic used in mainstream minifigs and the plastic used to make the popular collectable series of minifigs?
5
Why are LEGO minifigures getting more and more expensive?
6
Why do many minifigures have printing on their neck pegs?
2
Can't identify venom/spiderman minifigures