How can I make my LEGO engine go faster

I have a LEGO engine powered by a PF XL motor but I didn't realize until now that the motor is not that fast and that even when I increase gear ratio the gears always get either unattached or jammed. 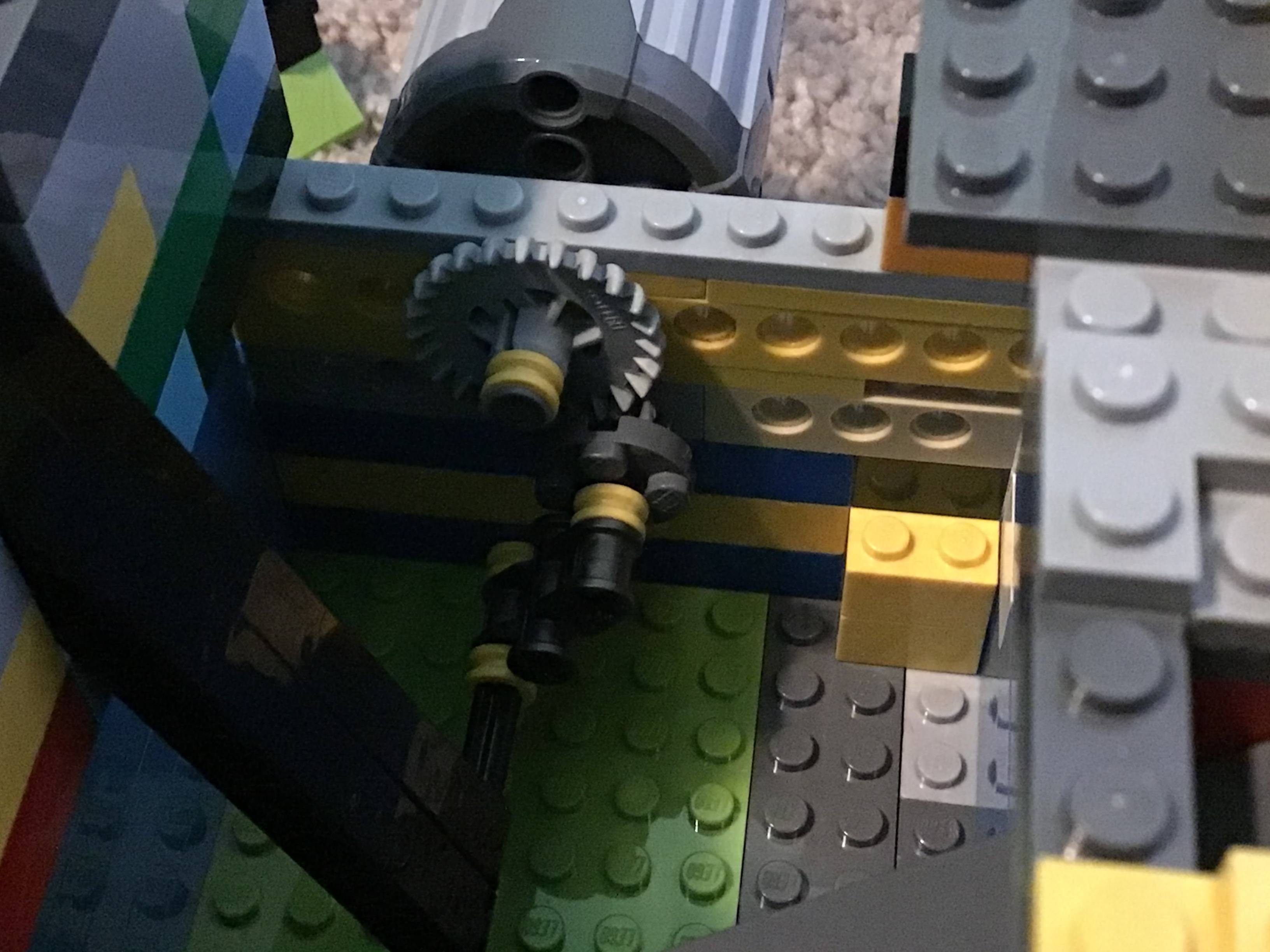 What should I do?

Thanks to mindstormsboi and Alex I was able to change the design of the engine to the following. It works much better now. 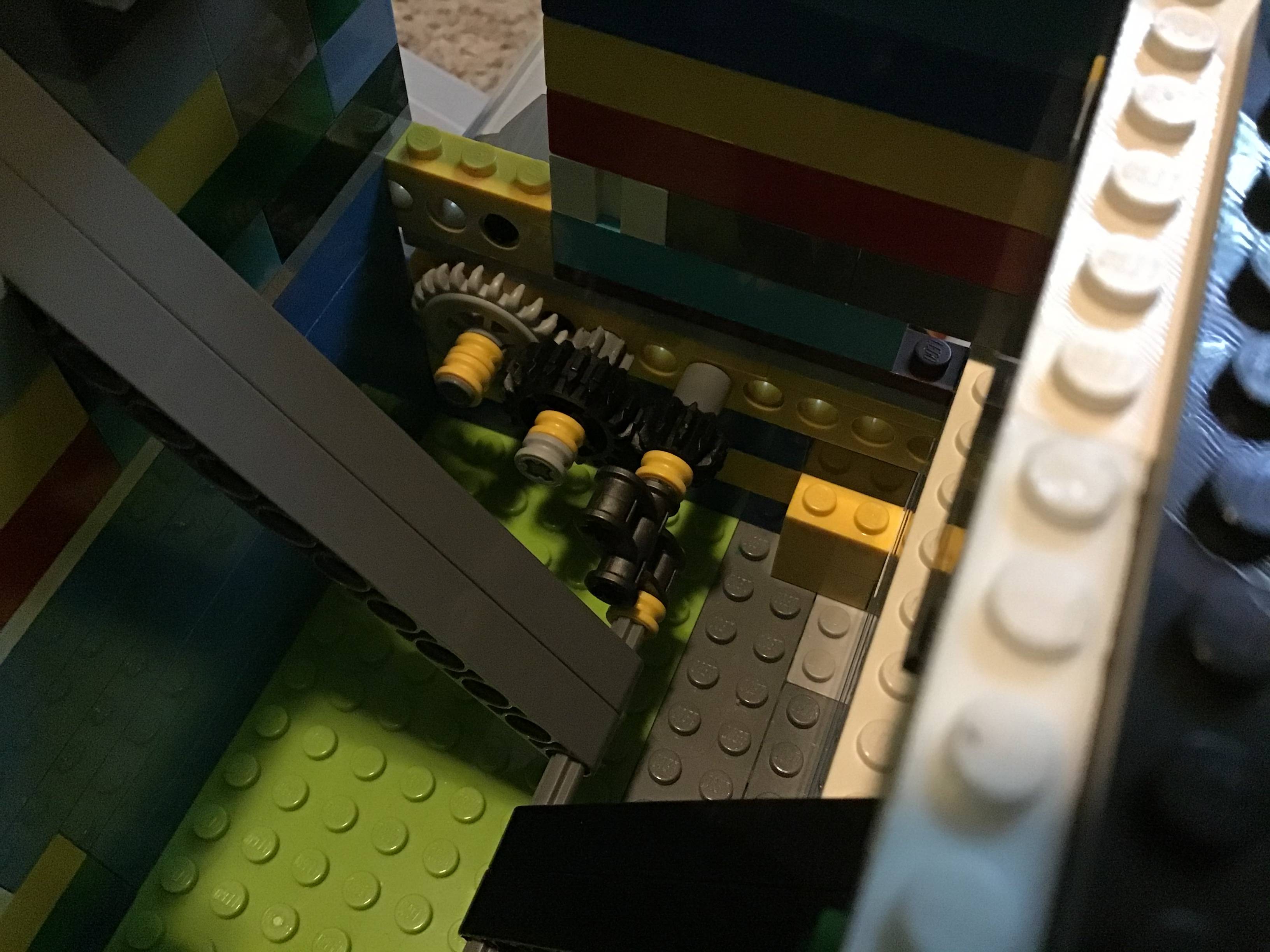 If you need a fast motor but not having too much torque, yet powerful enough - consider using a PF L-motor. It has roughly half of the XL-motor's torque, but twice as much rpm.

The PF XL-motor has high torque, considering its intended application with LEGO. This is known to cause some serious damage to gears if the assembly isn't rigid enough. It is essential to have your gears braced properly from both sides. Otherwise your gears will be slipping and/or grinding under load. In your picture you have your gears braced from one side only - this will cause you problems. You need to construct rigid bracing from the other side as well.

I find Sariel's Gear Ratio Calculator useful for finding the right gears for your application.

To me, that does not really look like a proper gear train. I recommend that you line up all your gears on a technic beam and stick axles through them (and obviously bushes so they don't fall out). You also need to be using the correct gears. In other words, the ones you're using seem incompatible with each other, so you need to find gears that are designed to work together such as this gear with this gear combined and this gear with this gear combined. Also, make sure that any other Lego bricks are not interfering with the gear train. More info about gear trains.

Here is an example of what I mean: 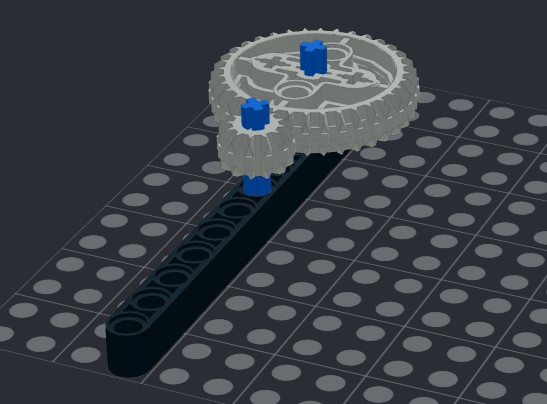 As you can see there are no bushes attached to the axle, but that's because I'm using axles with stop. I lined up my gears on a beam without putting them too far or too close from each other and now they freely spin with no problem.

You also wonder how to make your engine faster. If using one single big gear and another small gear together is not fast enough, try adding some more. I will show you one way of doing this step-by-step. 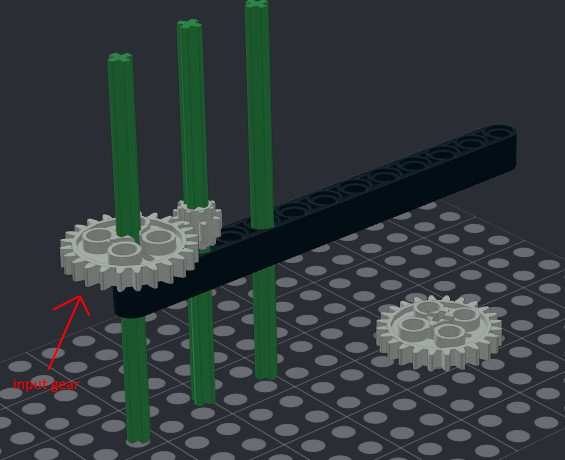 Above is one big gear and one smaller gear, which is considerably faster than without any gears at all (unless you use the smaller gear as input gear, which gives opposite effect). If it is not fast enough for you, then we will expand the gear train to make it faster. 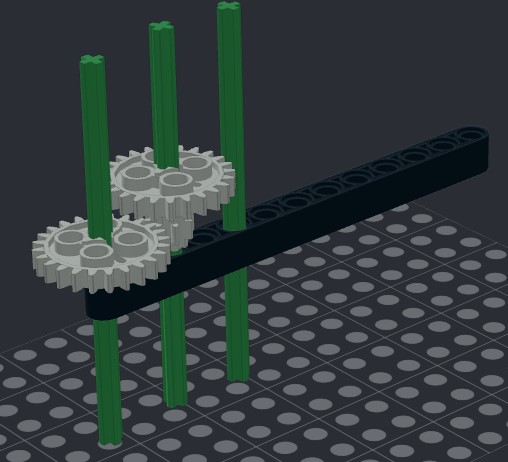 Now there is another big gear on top of the small one. This is because another small gear will follow after it, which will be almost twice as fast as the previous small gear. 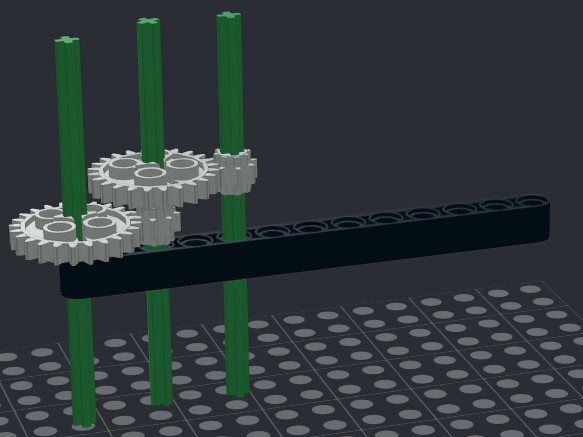 Now there is the smaller gear. As I already said, it will be faster than the previous one due to the size of the other gears following it. 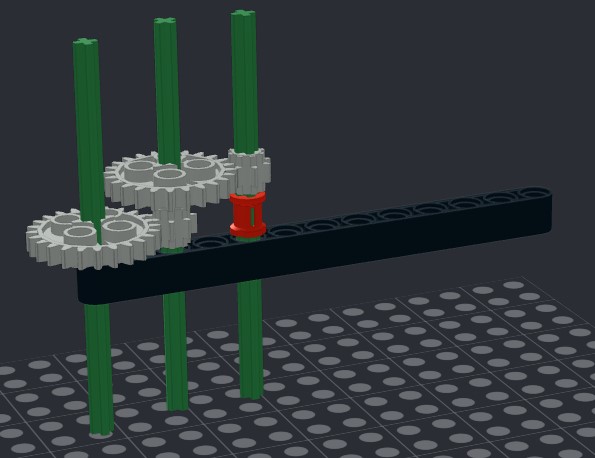 Now we put a bush under it to prevent it from slipping. You might think I could've put another big gear there instead, but no, I can't, because it will ruin the gear train and jam it up. The gear train will therefore continue on the other side of the beam, like so: 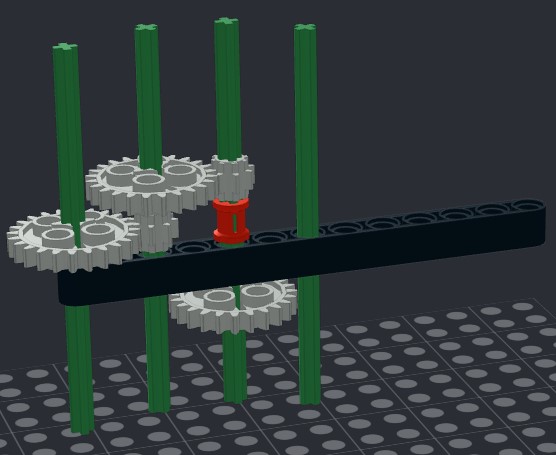 A big gear was placed on the other side of the beam to continue the gear train, and of course, a smaller gear will follow after it. But keep in mind that the smaller gear should be on the right axle from the bigger gear, not the left, because the axles on the left are already controlled by gears and you may end up twisting the axle or breaking the teeth off of the gears above them. It is also worth noting that putting too many gears will make it too hard for the motor to move them due to the heavy load of overall friction between them, so don't try to make it too fast.

Update: Here's another picture of some example gear trains taken from this answer: 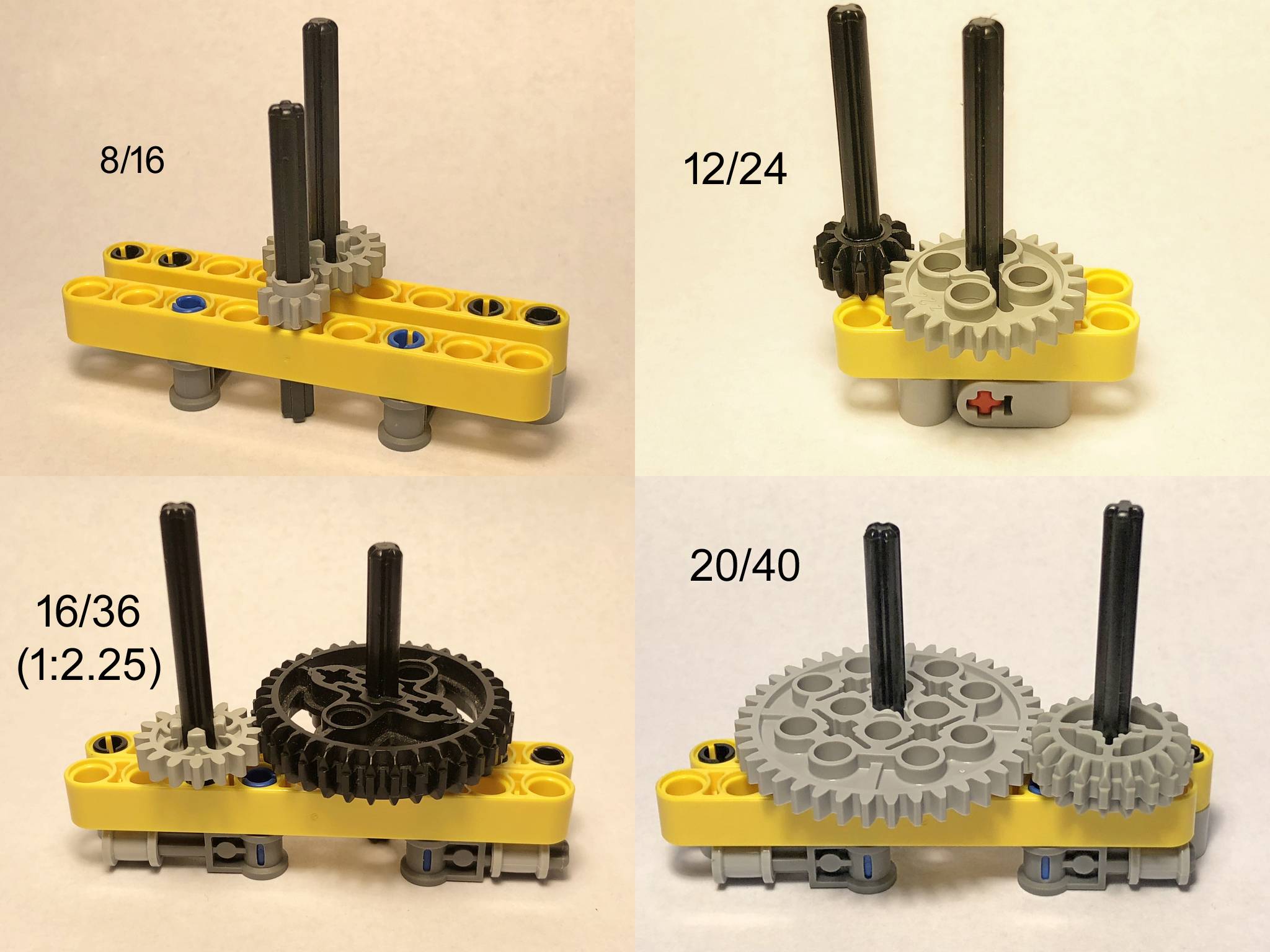 You can also use gear links to make your gears faster while they are spread apart, as seen here: 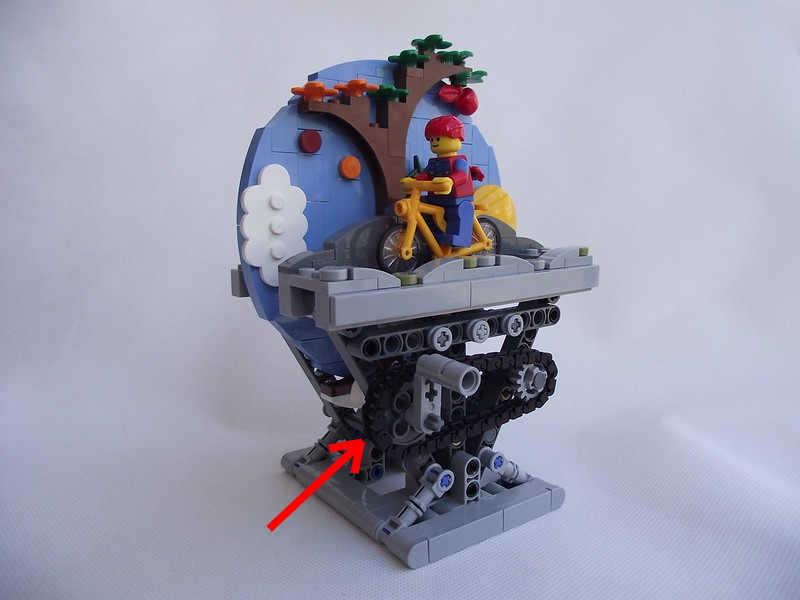 Just note that there are different variations of those gear links which are designed to work with different gears.

Not the answer you're looking for? Browse other questions tagged technic gears gearing or ask your own question.

12
How to make a conveyor belt with LEGO parts?
16
How can I make a precise one-way clutch using Technic elements?
4
Can you use a beveled gear as a pinion?
15
How much tension can I expect to get out of a lego chain before it starts to give away?
4
How can I improve my rackless steering design?
5
How to best transfer power at 90 degrees for high torque applications
1
How do the 61927 actuators work in MK II crane set (42009)?
7
Trouble with 42110 Land Rover Defender transmission
2
How to make a Lego continuous conveyor belt
3
Gearing problem