What's a good base collection of tiles?

I recently picked up a copy of the LEGO ideas book, and been inspired. As a novice builder, I've noticed that almost every model makes use of tiles to provide a finished look, which seems like a great idea.

Accordingly, I'm interested in buying some tiles in bulk for assorted building projects, but I'm overwhelmed by the options. Bricklink has many kinds of tile. What would be a good starting set of tile pieces to aim for, and roughly how many? And what's the difference between tiles with and without grooves? Is the groove on the bottom? Is one piece much more useful than the other? Argh! So many options! Can anyone recommend a sensible way to proceed?

Looks like there are really two different questions here. Allow me to address the question regarding grooves on the tiles:

What's the difference between tiles with and without grooves?

Basically, on tiles without grooves, the vertical edges run continuously straight from top to bottom. On tiles with grooves, there is a small lip at the bottom of the tile just large enough for a fingernail or a separator tool. 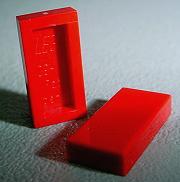 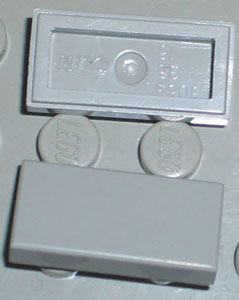 Is the groove on the bottom?

Yes, it runs all the way around the bottom of the tile.

Is one piece much more useful than the other?

The difference is mainly in the ease of removing the tiles once attached to another Lego element. As I mentioned above, the groove leaves enough space to prise the tile away from whatever other LEGO element it is attached to. In the case of the 2 x 2 Tile without groove that you reference in the question, according to bricklink, it was discontinued in 1978 after the 2 x 2 Tile with groove appeared in 1973, so I would guess that LEGO considered the 'with groove' to be a better design.

Whilst I can't answer specifics on types and quantities, look out for sets that include a reasonable umber of tiled pieces. The modular buildings all include a fair number and range, as do the Minecraft series of kits. Our local Lego store (Watford, UK) had a whole cup of 1x1 tiles all in a dark colour that someone had put to one side, but they weren't 'on the wall' when I looked.

What to do for tiles? Have a collector rifle through their collection for hours and see how many of each piece they have! (Did that for you.) Here's the base you wanted:

17
What's the exact opacity and translucency of transparent bricks?
8
Personal part collection on the web (Bricklink or alternative)
11
What is the biggest base plate available?
2
What are the significance of 3 marks that appear on the back of base plates?
6
What's the smallest LEGO component, based on its largest dimension?
5
What's the purpose of the decoration on the BrickHeadz piece?
10
Different surface roughness of tiles. Quality issue?
10
What's the Difference Between an Open or Hollow Stud, and Solid Stud Brick?
6
What's the purpose of brick 46835 (two wheels clutched into each other)