Is this grid fin piece a standard LEGO brick?

I'm trying to identify the circled part from this MoC, but I haven't been successful in doing so. On the one hand, the creator of this has called out two other parts in it (not shown here) as being modifications of existing bricks; but didn't say anything about the one I'm asking about, and the spacing in the grid looks about the same as in a LEGO fence piece which makes me think it might be a standard brick after all.

I think that is 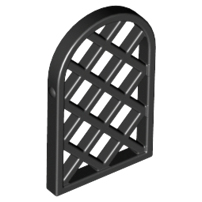 Looking at the pictures, I think Syberion has correctly identified the part.

Just want to cover the moment where you mention part modification may be required. I don't think there is a need for modifications, it should work with existing parts like this:

Not the answer you're looking for? Browse other questions tagged part-identification customization or ask your own question.

10
Is this antenna a LEGO piece?
10
Is this skateboard piece LEGO?
4
Please identify this broken LEGO Technic piece
4
Unknown brick/piece information (curved, decorated slope)
2
Can you identify this handle-like LEGO piece?
5
Mystery 2x14 grey brick - cannot find instructions with this piece mentioned
7
What LEGO piece is this?
11
What is this 1998 lego piece for F-22?
12
What glass piece is this?