How can I complete the build of this Lunar lander from the Space and Airport Set (9335)?

We recently got Space and Airport Set by LEGO® Education (9335) for our four-year-old who loves space and really loves his Duplo. He's been enjoying putting together the different parts of the kit but we've run into a problem - for some reason, LEGO doesn't have instructions for a bunch of the elements in the set.

Inside the box, all of the pieces were bagged in unnumbered plastic bags but not by set, so we couldn't even guess which pieces were designed to go together. There's a card with all of the pieces included in the box, too, but not by set. There are instructions for four of the figures, one on each of four plastic cards, and there are a set of instructions on the website for another five of the more complicated ones. That's nine out of what I'm guessing is 16 different builds, meaning 7 are missing instructions.

Some of the items are easy to figure out because you can see or guess all of the pieces just by looking at the images - for example, the rocket. But we're a bit stuck on the Lunar Lander because there are no images of the reverse side. If all of the pieces had been grouped in one bag, we could have figured it out pretty easily, I think but, as is, we're stuck.

Here's the image of it that's included in the set (which I've taken from the LEGO site link above): 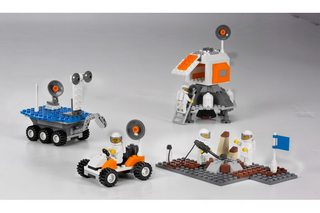 We started from the ground up and we've gotten this far: 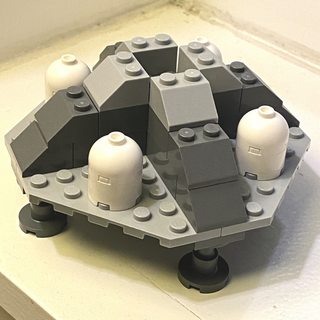 I'm not certain that the dark grey pieces are correct but they seem correct enough, so I'm not too worried. But now we need help figuring out the upper half. We have the white 6x6 for the base but there seems to be something between the light grey angle pieces that we have and the white 6x6, but I'm not sure what it is.

My husband and I have both dug around some on the internet but other full-set lunar landers are all that we see in search. Does anyone have an instruction set or can make an educated guess for which pieces we should use to build the rest of this lander?

While I'm focusing on this specific set, there are other parts like the airport itself that also don't have any instructions I can find. LEGO usually seems so good about showing you how to build things - and particularly for an educational product that's supposed to be used in a classroom by several children - it seems odd that they don't have instructions for this.

So, Brickfactory and Swooshable have the same six images - the front side of all five plastic cards in the box and the reverse of one of them.

The best I could find in terms of instructions for 9335 is this page, which seem to contain all the prints included in the set. However Lunar lander is missing. It looks like one of those "inspiration" sets LEGO used to include in the old days. Looking at the pictures I found they are reasonable quality and model doesn't contain too many parts. So I gave a try building it digitally: 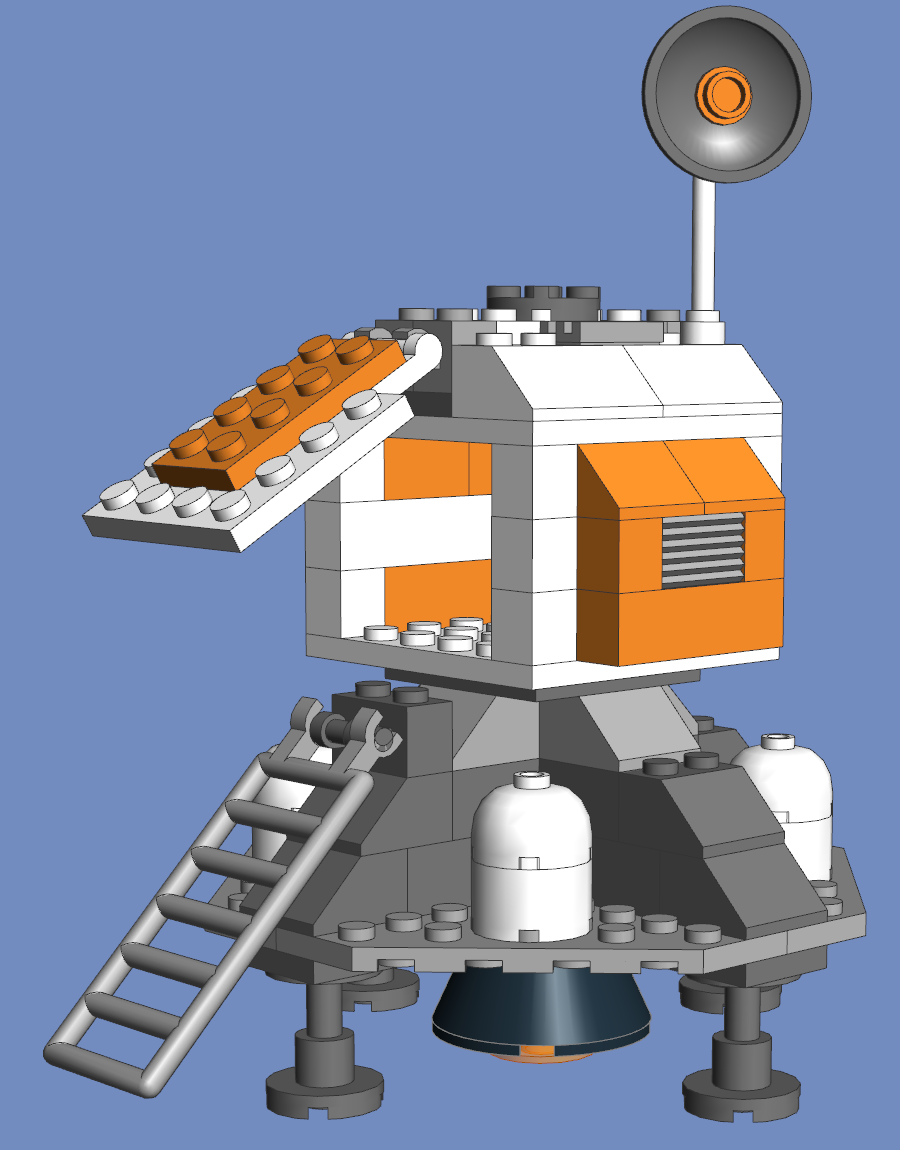 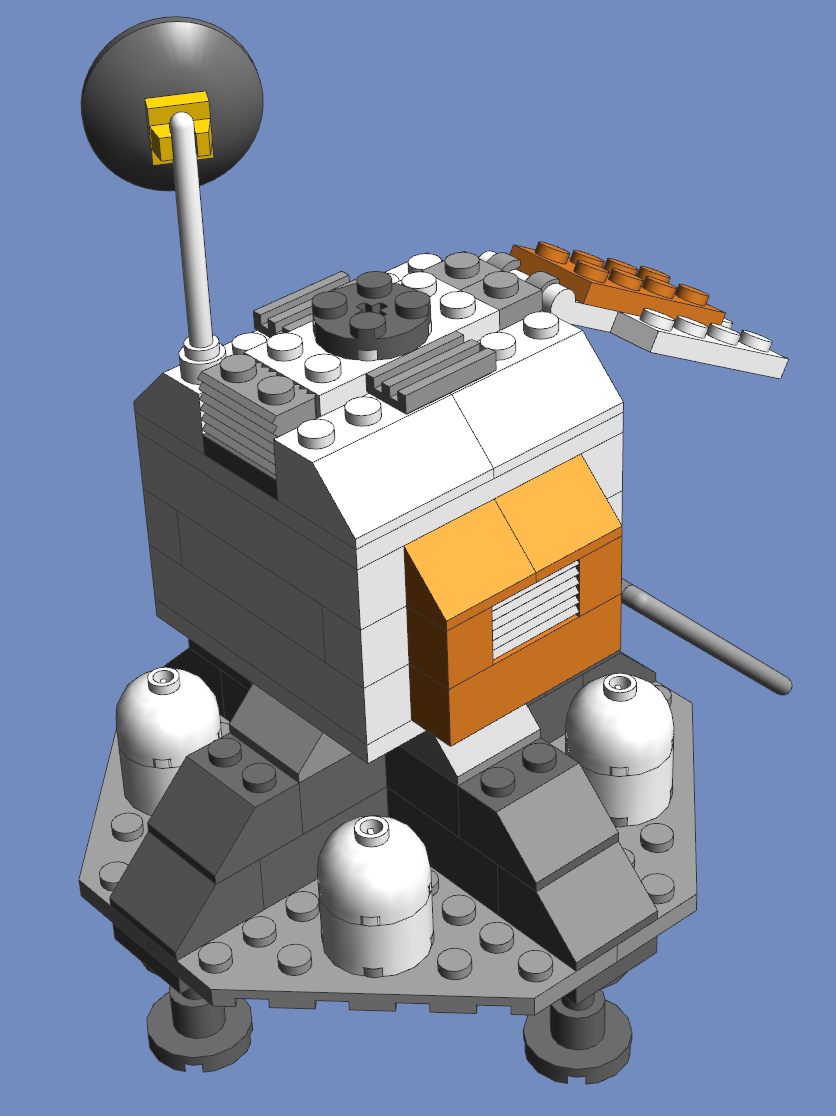 There are a few places like top white slopes, back Light Bluish Gray brick on top as well as 4x4 plate below first 6x6 white plate, where you couldn't tell the exact elements used. Apart from that everything seems to be pretty clear for me.

I could have shared the LDraw file as well, however not what would be the best way to do it here on SE.

Alex has rendered a great model.

I can only offer my own take by adding the LEM ascent engine.

These are the parts I used:

You can find the LDraw file in my git repository here.

21
How can I build an (automatic) Mindstorms charging-station?
8
Can you build accurate models using 100% LEGO elements by following Megablocks instructions?
11
Good LEGO CAD Design Software with Technic elements and animation
1
Looking for instruction manual for brick set #1845 (20th Anniversary Jackpot)
4
Looking for instructions for Air Canada Mega Bloks polybag 99911/99912
14
How does the Space Shuttle dock the ISS?
14
Is this an error in the updated Harry Potter Diagon Alley build/instructions?
4
List of sets with large spiral-bound instructions?
9
How can I build a Lego slope of this exact angle with ideally only legal techniques?