Can Lego Education WeDo 2.0 be controlled without using the app?

I would like to use WeDo 2.0 creations with a simple controller that would turn the motor on/off as in the Lego Education Simple and Powered Machines. Is this possible in WeDo 2.0 or do you have to use the app ?

This is not possible currently using any of the hardware and software provided officially by TLG. However, there are several solutions that might work for you if you have a spare Arduino or Raspberry Pi around and are willing to do a little programming.

If you aren't aware, all of the Powered Up elements communicate via a Bluetooth protocol that TLG provides documentation for. There are several open source projects that make use of the API to interact with Powered Up devices.

If you have an Arduino available, you could try the Legoino project. This is capable of interacting with both Powered Up remotes and Powered Up hubs, so you can program it to interface between the two and provide remove control. Here's a video showing that setup in action controlling Boost: 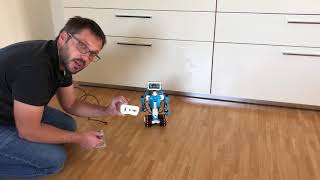 If you have a Raspberry Pi or spare computer around, you might be more interested node-poweredup or pylgbst.

Not the answer you're looking for? Browse other questions tagged education wedo or ask your own question.

11
What is the Mindstorms NXT Education kit?
4
Can I use the NXT 2.0 programming software with my educational set?
2
LEGO mindstorm - which product to use to make projects mentioned below
3
Access WeDo on OS X from a real programming language
15
How to build a steerable remote-controlled vehicle with just 1 motor?
2
Starting Lego robotics projects low-budget with the intention of expanding later
3
Can ScratchJr work with WeDo 2.0?
3
Any way to get the current motor position or angle in WeDo 2 (when accessing hub via BLE protocol)?
2
Can you remotely control Lego Education WeDo 2.0 creations using the WeDo app?
2
Lego Wedo 2.0 projects