I wonder whether a piece exists fitting any of the following (equivalent) descriptions:

EDIT: the intended use was to attach the 'hair' for a Bionicle MOC representing a character of the Vortixx race. I planned to build the head using a Vahki head with a one-axle-two-pins perpendicular connector attached to the axle hole on the back of the head, then attach the tile/plate-hybrids I described to the connector's pin holes with their studs, and finally 'loop' three system chains between the now-exposed stud holes. Currently I'm leaning towards just using two 1x3 jumpers and living with the half-stud of open space.

Unfortunately, this part does not exis.

In addition to the part suggest by Michael, you might be able to use the 2x2 tile with 2 studs (33909) if your design could be adjusted to make use of a 2x2 part: 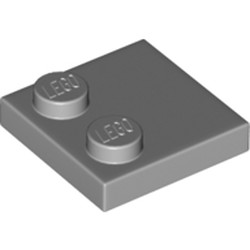 No, those parts currently do not exist. There does however exist a 1x4 plate with the middle studs missing: https://www.bricklink.com/v2/catalog/catalogitem.page?id=172557#T=C

Perhaps tell us the application you have in mind, and we can suggest other existing elements.

Not the answer you're looking for? Browse other questions tagged part-database or ask your own question.

4
Does anybody know the part number of this tile?
2
Database of parts with alternate numbers