Are there any cases of Illegal Building in an official lego build?

I am defining illegal as it is in this answer, specifically the following

I am also including one other situation:

A round piece between four studs as stated in a comment by Sandra.

When, if ever, have any of these methods been used in an official Lego Build?

As mentioned by you already, you cannot insert plates between studs (this used to be a valid technique 20+ years ago, but is no longer considered "legal" by LEGO)

This technique is used in 21309 Saturn V, to mount the flag piece as part of the moon diorama.

Given this set was released in 2017, I’d say its definitely a modern usage. 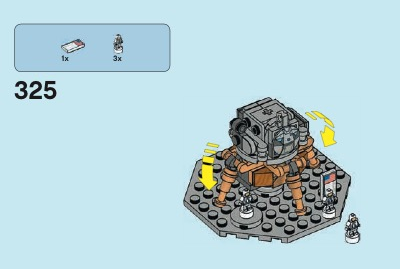 Not the answer you're looking for? Browse other questions tagged building history or ask your own question.

37
When did LEGO decide that it was okay to put a stud into a Technic hole?
13
What are some "Illegal" LEGO combinations?

37
When did LEGO decide that it was okay to put a stud into a Technic hole?
8
Firmly connect bricks in a triangle
3
Suspension bridge building techniques
8
Has the building technique of Technic pins in a brick cylinder been used in an official set?
9
Combine Duplo feet with regular LEGO
8
Horizontal connection between plates
11
How to fill a vertical 1.5 stud wide gap?
7
Connecting an axle to a stud on the ground for railings
12
Train level crossing using 2021 road plates
8
Align 2xX plate on "sandwiched" brick (height of 5 plates)