What version of Lego Digital Designer has all the parts that LEGO ever added?

I would like to know what version of Lego Digital Designer has all the parts that the Lego company has ever added to the program, before the program was discontinued. I was able to find more parts from someone on Eurobricks forum but I still need more bricks.

I believe that the last version that had a complete set of elements was 4.3.11, however that has dependencies on Adobe Flash, so will likely not work on most modern systems that have now removed Flash.

The last release, 4.3.12 has a known issue with missing parts. However you can use the parts library (Assets.lif) from 4.3.11 with 4.3.12 - this can be extracted from the installer if you open it with an archive explorer (i.e. 7zip or similar).

Bear in mind that:

Glad you've managed to get it working in your preferred version. I'm not aware of people adding more elements to the official library files, but I've not really looked for it.

Whilst we can't say exactly what The LEGO Group will do in the future, they did say when they acquired BrickLink that:

The LEGO Group is planning to support and evolve Studio and will review opportunities for both services following the closing of the deal.

They also released a video last December (2020) where they updated on the future of both BrickLink and Studio.

In addition, we're going to upgrade the Studio software every month to improve the user experience and enhance it's performance.

Finally, as a quick test, I was able to find the Fright Knights Witch and Bat Lord heads and torsos fairly quickly in Studio: 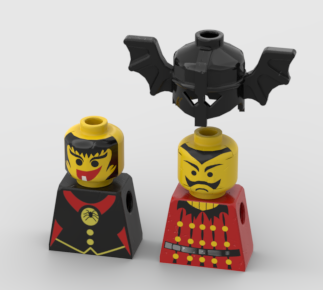 Others are likely available.

11
Is there an easier way of threading Technic pins into other elements?
18
LEGO Digital Designer Alternatives
0
LDD not rendering
10
How to convert a model from "LEGO Digital Designer" Extended into non-Extended?
5
3D printing LDD model
4
What part in LEGO digital designer can be used for a tank track?