Is there an official LEGO terminology for the features of basic pieces?

When I read this question I remember to regularly ask myself what the features of bricks are called. At the top are there nibbles, knobs, or studs? At the bottom are there tubes? New bricks also have little "support walls" (?) at the bottom, known from DUPLO, how do you call these? Is there an official LEGO terminology at least for the most common types of features shown in this image?

For an official position, you may want to check older LEGO catalogues or instructions to see if they're naming things, and how. While you can find some names for complete elements in, for example, service parts catalogues, I don't think you'll find much for specific subparts.

Given the 1958 patent illustration, it's likely the patent itself named subparts, and more specifically studs and tubes. The original Kiddicraft patent called studs "bosses", by the way.

Keep in mind LEGO has, until recently, be very protective of what it's been doing internally; as such, the community as a whole didn't have much info, so that a lot of current nowadays terminology isn't official, but rather derived from public habit.

However, that's changed a lot recently, and LEGO isn't as shy as it was when it comes to publish internal data such as colour names and numrical IDs, design IDs, parts IDs, and even part names. The only problem is that they never bothered to have a truly consistent naming scheme, and the fact that English isn't the main language of Denmark doesn't help.

Yet it does help us find official subpart names, which we can hunt through the online pick-a-brick selection.

The small pins inside 1xn bricks are "pins" (LDraw's "Brick 1 x 2 without Centre Stud" is a "Brick 1X2 Without Pin"). But as connection point on some elements, they are called "Shaft Ø 3.2" (LDraw's "Minifig Accessory Helmet Viking Horn" is "Horn W. Shaft Ø 3.2")

I suppose you could find more, but it's rather time-consuming :-)

The bumpy-things on the top of a brick are called studs.

At the bottom of the brick, the holes that the studs go into are called tubes.

As far as I know, there are no parts of a brick called nibbles or knobs. 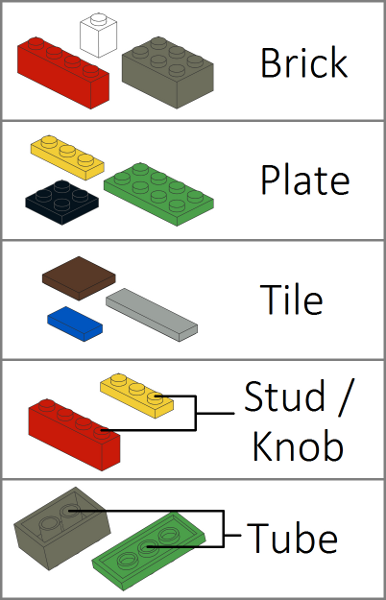 Not the answer you're looking for? Browse other questions tagged terminology or ask your own question.

32
What does the acronym MOC stand for?
13
Does the basic 2 x 4 brick have a common nickname?
7
What is the official term used for building MOC models?
6
What are the armless minifigures from the LEGO boardgames called?
7
Does the word Lego have anything to do with Latin verb lego?
4
Is there a named scale for sets such as 75055 Imperial Star Destroyer or 75054 AT-AT
6
What is the name of the small pins that are used with small wheels / rims?
6
What does the acronym SPUA stand for?
7
What is LEGO terminology for measurement of normal bricks and common scales?
6
Who can use "LEGO Official Store" for an online LEGO store?