I just finished my build of the Caterpillar bulldozer D11 (set 42131) and I'm NOT able to operate it with the Control+ app on my iPhone.

First the calibrate process begins:
Step 1 in that is to move the scoop up and down, but in stead the plough moves.
Step 2 is supposed to change the angle of the scoop, but nothing happens at all. The Control+ app just keeps playing that engine noise and absolutely nothing happens for minutes until I kill the app.

That is all. Without getting through calibration the model can't be operated.

Obviously I could have wired the 4 motors to the wrong sockets on the control box, but I'm absolutely certain I followed the instructions in the book correctly.
I double and triple checked at that point in the build as I found the pictures in the book not very clear at first. I'm VERY certain I got that right.
Even if I did got the motors mixed up I still expect to see some movement when trying to calibrate. But movement on the wrong parts.

Is there a known issue with the Control+ app for this set? (It works fine, using the same iPhone, with the 42100 Liebherr 9800 excavator set.)

Or do I really have to take the entire thing apart again to get at the wiring? It is really buried deep inside the model so that would be a real pain.

I had the same problem as you and solved the problem. For me, the error is in step 87. I had mounted the orange part in the wrong side and it jamed the whole system from turning right. 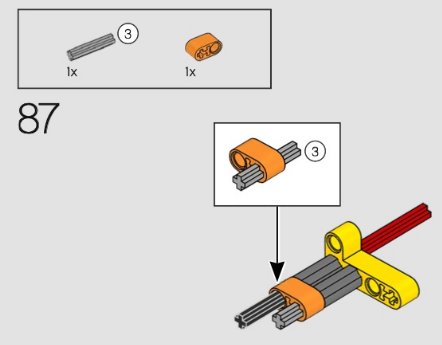 Hope this is useful to you!

Not the answer you're looking for? Browse other questions tagged technic powered-up control-plus or ask your own question.

4
How does the remote control on the 9398 4X4 Crawler work?
4
Can the Powered Up app be used to directly control the Boost Move Hub?
10
Alternative to LEGO CONTROL+ app
4
I am building the LEGO 42131 D11 dozer and some of the parts are moving in reverse when testing