"Heads up! Could not open project" error message when opening project

When I try to open my project it gives me error saying "Heads up! Could not open project". Could you please help me? Let me know if you want me to share the file.

We were working on that file till then and suddenly after saving we were not able to open it next time. 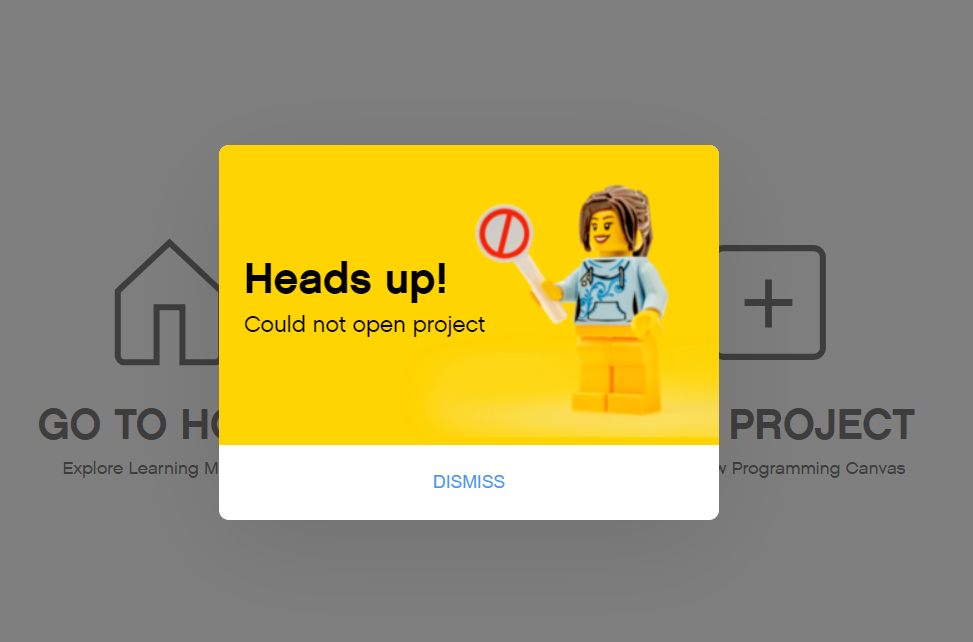 This is a generic error message, so everyone that gets the error won't have the same problem. However, using the methods described below could help find other problems as well.

This file contains minified JSON that is hard to read, but modern code editors like Visual Studio Code contain tools to automatically format the file in a more readable way. Once this is done, an experienced coder can use their intuition to look for anomalies in the file.

The JSON file contains a top-level object with 4 sections, "targets", "monitors", "extensions" and "meta". The contents of these sections will depend on the project, but in general, "targets" contains an array of two objects, one where "isStage": true and one where "isStage": false. The former looks to be default Scratch stuff that isn't used and the latter is the bulk of the project file. The "monitor" section will be empty unless you have monitors (variable value watchers) set up in your project. The "extensions" section contains a list of the different block types used in your project and "meta" is some more default Scratch stuff.

I was able to find the issue with the file provided by noticing that in the "targets" section, there were two "isStage": true and two "isStage": false objects. So it appears that somehow two versions of the project got saved in the same file. I was able to recover the projects by making two copies of the original file. In one, I deleted the second two targets and in the other I deleted the first two targets. I used a diff tool to compare the contents of these and they similar but not identical, so I deduced that they are two versions of the same project. I then updated the ZIP files with the modified project.json and was able to open the projects in the EV3 Classroom software.

I have created a small Lego App Tool kit to fix the problem, until LEGO service team does -> https://legoapptools.azurewebsites.net

How to get an image of a corrupted Spike Prime .llsp file or a corrupted Ev3 Classroom .lmsp file.

If you suddenly get the dreaded message of “Heads up! Could not open project” don’t lose hope, there is a way - unfortunately it will still require redoing the code.

This method shows you have to get an image of your entire code so that you can copy from it:

1
"Heads up! Could not open project" error message in EV3 software

11
RCX firmware download problem
6
Help Installing NXT-G On Mac 10.6.x
1
"The type or namespace name "Brick" could not be found" Xamarin Studio with MonoBrick
0
System.ArgumentException: Only Sequence Wires can be snapped
3
Could not open serial port or USB device, RCX on Linux
0
Mindstorms EV3 education 1.4.2 for Windows crashes when opening second project
2
EV3 program runs fine when connected to PC but does not respond when copied to the brick
3
Error message when using loop index as an array index to get value in arrays