Are there more studs or "antistuds"?

I was reflecting this morning about the recently introduced element Brick 1 x 1 with Stud on One Side and the fact that there is no real counterpart for it; that is, a 1x1 brick with a hollow cavity on one side (like the backside of our beloved Brick 1 x 1 with Headlight), and three other regular, flat, sides.

This led me to think that I've a feeling there are, in general, more studs on parts than there are "antistuds", that is, cavities to receive studs. Is this feeling accurate?

To verify, how should count antistuds? Should we consider, for example that a 2x4 bricks has 11 of them (the 8 standard ones and the 3 tubes)? That each hole of a Technic brick counts for two? And if we settle on that, how could we get an actual count?

There are more antistuds based on your description, you have to account for the flat bricks that have no studs and any sloped bricks that have at minimum twice the number of anti studs. While there are the inverted sloped pieces the standard wider bottom are more prevalent and there are more variations in length and width. Also many of the flat wing pieces have more antistuds for overlapping purposes. Even counting those as 1/2 antistuds since they do not cover the entire stud, they still possess enough hold to keep the model together. With the more custom pieces used in the Star Wars and newer space kits to give the starfighters the smooth look there are many more antistuds on those pieces. That is not even counting the technic bricks.

It seems like the studs have an advantage and here's two reasons why:

1) The base plates have only studs and no antistuds. So many base plates were made that this is stacking the numbers in favor of the studs. There are a lot of studs on those big grids.

2) There are many pieces with extra-studs like this type: 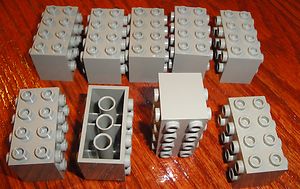 but I don't remember pieces (other than LEGO Technic beams and rounded beams) with, and only with, extra antistuds.

So this brings me to another question, "Do LEGO Technic beams create more antistuds than the base plates and extra-stud pieces combined?" I don't think it does.

...on to the next part of the question "how can we count this?"

27
Why are old LEGO bricks more brittle than new ones?
17
Are there any mirrored LEGO bricks?
9
Does Toy 'R Us (or more expensive-than-average) retailers have more extra parts than average?
19
What are the exact dimensions of a DUPLO brick?
12
Any reasons for the introduction of the new-style raised arch?
10
Why are 2/3 height bricks with studs on the side 2 studs deep?
5
Is it possible to make inverted slopes with solid studs
5
Why are LEGO minifigures getting more and more expensive?
9
Why are there scratches on new bricks?