I have a GBC module1 which is quite simple but blocks regularly because a ball happens to be at just the wrong place at the wrong moment.

Per se, it's not a problem as a Technic Gear 24 Tooth Clutch protects the motor and the module can easily be unjammed by simply moving the wheel backwards manually to free the offending ball(s). It's simple enough that I can ask people in the public to do it when I'm lazy, but for bigger displays it's a given that the points of possible failure should be minimized as much as possible.

So my question is, is it possible to create a mechanism that would auto-unblock? To clarify, what it needs to do is to drive an axle in one direction, and if that axle becomes blocked, make it rotate shortly in the other direction, then resume.

My first thought was to try using differentials, by splitting the rotation on two paths, the regular one driving the axle, and the other one having some resistance to it (using a gear on a Technic pin with friction, for example), then recombining the paths somehow so that when the first is blocked, the second would take precedence and drive the mechanism backwards.

Unfortunately, a nagging thought at the back of my head tells me it'll never work as such (as going forward is always easier than going backwards, even if it's blocked forwards, it will just stay locked in place), and a first experiments confirms this (at least it's a solution if I run short of clutch wheels...).

Of course, a robotic solution would be easy to work out, but I would like to be able to replicate that kind of mechanism a lot (what, you think I have only one jamming module?), and I tend to prefer the pureness of mechanical-only solutions. Pneumatics would probably be OK, but I'd rather do it without.

I'll accept any working solution, but the more compact the better.

1) For those interested, it's the blue and yellow one with trans-clear front in which the hand of God puts some balls at 00:15 in this video of the LEGOworld Copenhagen 2011 GBC setup
technic building balls
Share
Improve this question
edited Jan 9 '18 at 17:18

I've found a solution that's actually pretty easy, but took some time to try out because I don't have the parts I need at hand. 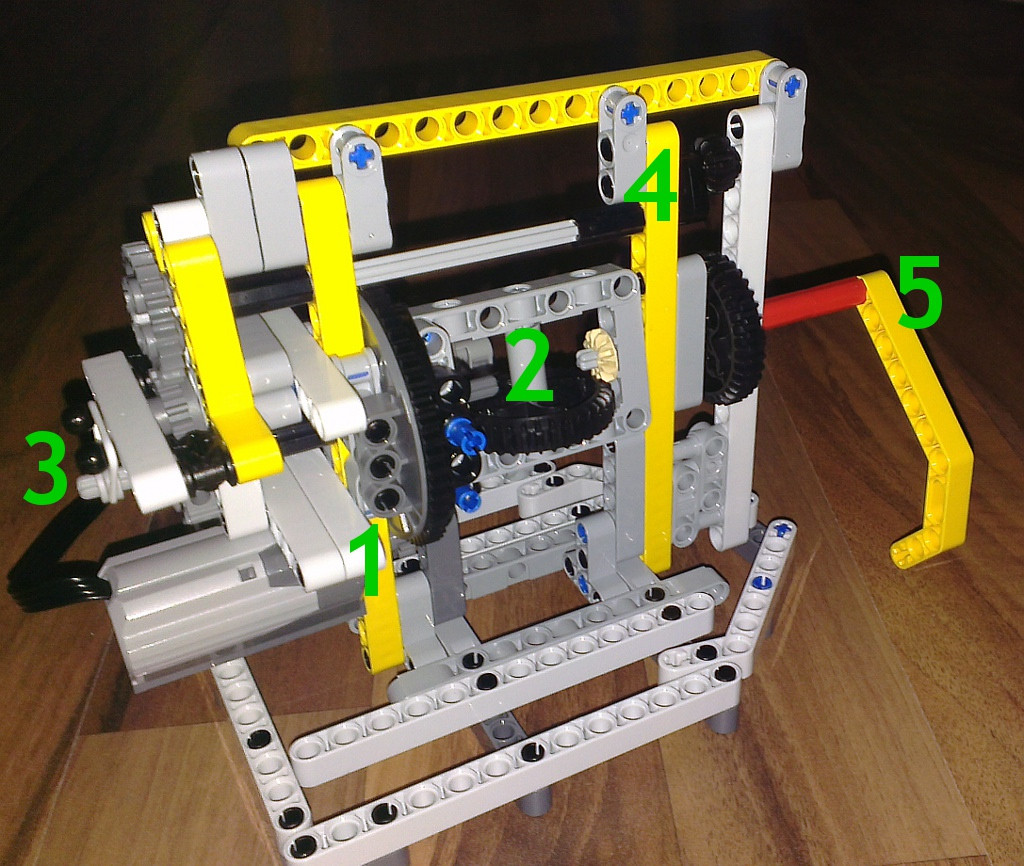 As long as there is less resistance on the output than on the unblocker, only the output will move. if the output is blocked, the unblocker will start rotating and turn back the output (just a bit - at the point where the "gear on a stick" gets in contact with the bigger output-gear). if this dissolves the problem, the output starts rotating again.

UPDATE: i got a Technic Gear Differential today, so i could build a smaller (and better working) Version of this. You can watch it on YouTube.

Not the answer you're looking for? Browse other questions tagged technic building balls or ask your own question.

16
How can I make a precise one-way clutch using Technic elements?
8
How to build a limited slip differential?
3
How to design ackermann steering with lego wheel bearing front?
4
Can you use a beveled gear as a pinion?
5
How important is a center differential on a 4WD model?
15
How much tension can I expect to get out of a lego chain before it starts to give away?
3
Linear Actuator Clicking
3
Clutch gear test
6
How do you make a triggered counted ball drop?
2
How to make a Lego continuous conveyor belt