Which bricks are still protected by copyright / trademark / patent law?

In 2010, The European court of justice (ECJ) in Luxembourg validated a lower-court ruling, in favor of Canada's Mega Brands, that Lego's bricks can't be legally protected by trademark law because their two rows of interlocking studs are a functional, technical shape that cannot become the property of any one company.

In 2015, the ECJ rejected an attempt by Best-Lock, a UK-based toymaker, to appeal against the trademark protection of Lego’s figures, ruling that LEGO mini-figures should continue to be classed as protected shapes.

In December 2016, German toy manufacturer Delta Sport filed an application for the declaration of invalidity of design 001664368-0006, trademarked the with the EU since 2010, applying the same reasoning used by Mega Brands to win their lawsuit in 2010. The European Union Intellectual Property Office (EUIPO) initially sided with Delta Sport in 2019, but this ruling would later be overruled by the General Court of the European Union (EGC).

What is the impact of these lawsuits on items sold by brands such as Qman, BlueBrixx, Cobi & 3DWise, or artists like Stefano Bolcato or Andy Morris (aka "Little Big Art")?

To which degree is one legally allowed to produce and/or sell LEGO-compatible bricks or artworks inspired by LEGO?

This is a complex topic. If you are considering designing a LEGO-compatible product, you may want to consult a lawyer who is an expert in this area. With that in mind, here's my attempt at an answer.

A type of intellectual property that gives its owner the exclusive right to copy and distribute a creative work, usually for a limited time.

A type of intellectual property consisting of a recognizable sign, design, or expression that identifies products or services from a particular source and distinguishes them from others.

A type of intellectual property that gives its owner the legal right to exclude others from making, using, or selling an invention for a limited period of time in exchange for publishing an enabling disclosure of the invention.

An intellectual property right that protects the visual design of objects that are not purely utilitarian.

It is very easy to get these mixed up.

Trademark never expires, and relates to a specific design or mark that identifies a product or brand. The shape of the LEGO minifigure is trademarked. The word "LEGO" is also trademarked.

The "Red LEGO Brick" judgement from 2010 struck down the idea that the shape of the 2x4 LEGO brick could be trademarked. The reasoning behind this decision was that the shape is functional and it would not be possible for another company to design another shape that functioned in the same manner without being essentially the same item.

Copyright rarely applies to functional designs like building blocks. It is used for purely creative works. It may apply in the case of box art, instructions, or complete set designs.

Patents cover novel and non-obvious functional inventions. The stud and tube design was successfully patented in 1958 and the patent has since expired. 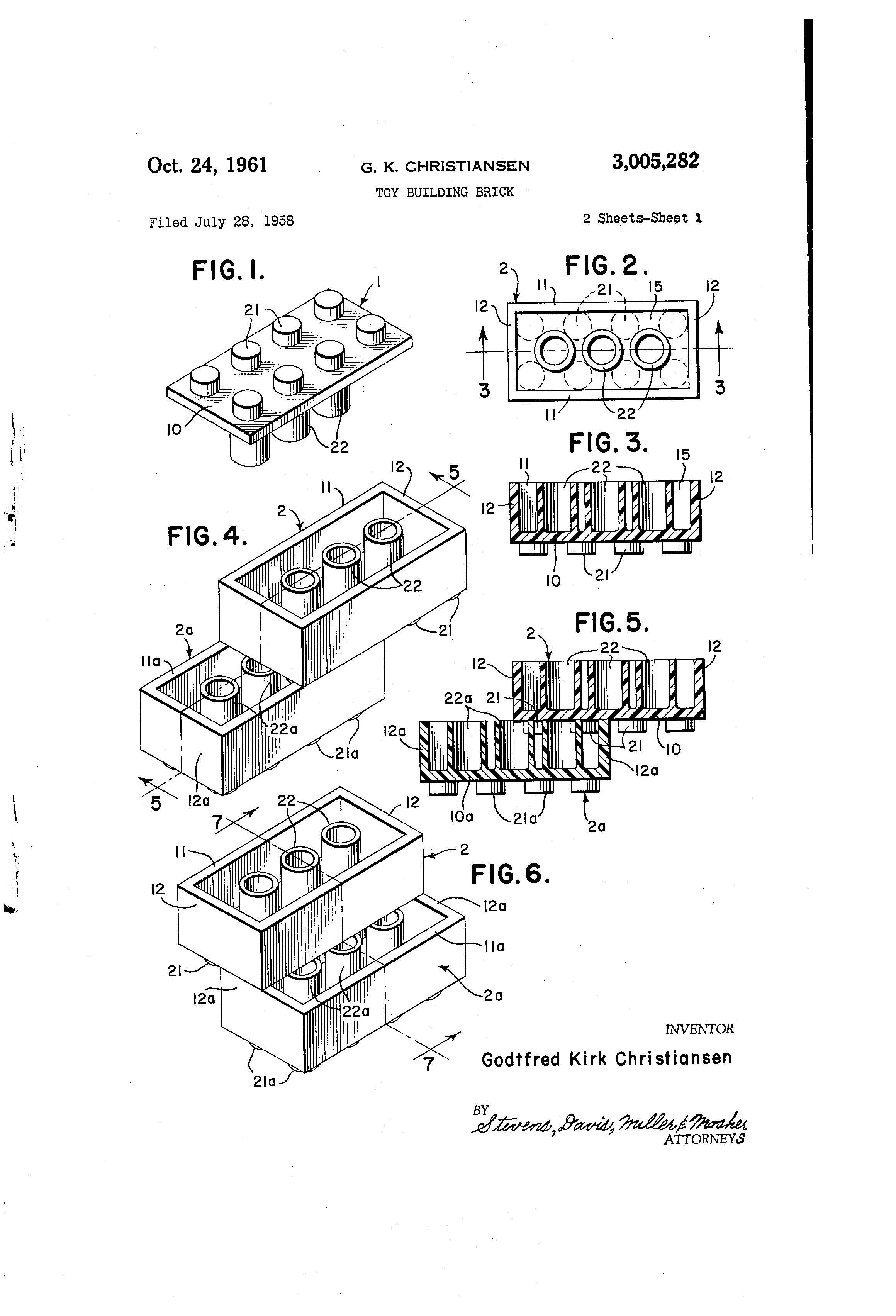 Design patents are a bit different than regular patents. They still represent novel and non-obvious functional inventions, but can be granted for a different visual structure that performs a similar function to prior art. For example, the Coke bottle was covered by a now expired design patent, but is still covered under trademark: 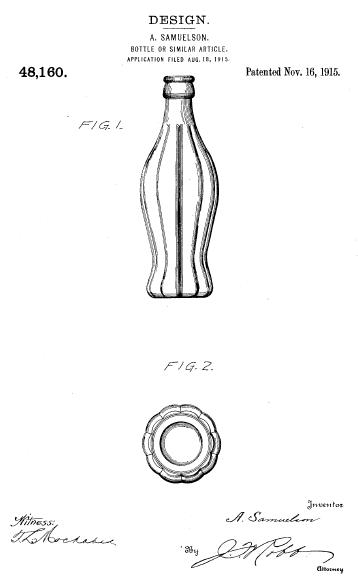 The 2016 Application for Declaration of Invalidity that you mentioned revolves around a registered community design (RCD). I believe that this is an EU legal structure that is effectively a design patent or industrial design right.

The application referenced the 2010 2x4 brick trademark case. The rationale for denying this request to have the RCD invalidated was partially based on the arguments related to trademark in that case not applying to an RCD. Trademark should rarely apply only to specific non-functional design elements, otherwise the patent system need not exist as entities could simply permanently trademark everything they design. Patents can be more broad in the designs they cover, as they allow only for a limited period of exclusive use.

In practice, very few elements appear to be eligible trademark. The minifig is the most common one that I'm aware of. The 2010 case makes it clear that regular bricks are generally not eligible for trademark protections, even bricks like the 2x4 that are iconic and largely synonymous with the idea of a LEGO brick.

That implies that most element designs will fall under patent law rather than trademark. In order to be eligible for a patent, the design must be novel and non-obvious. If a patent is awarded for a design, it will typically be protected for some number of years, typically on the order of about 25. Here's an example of a recent LEGO element patent: 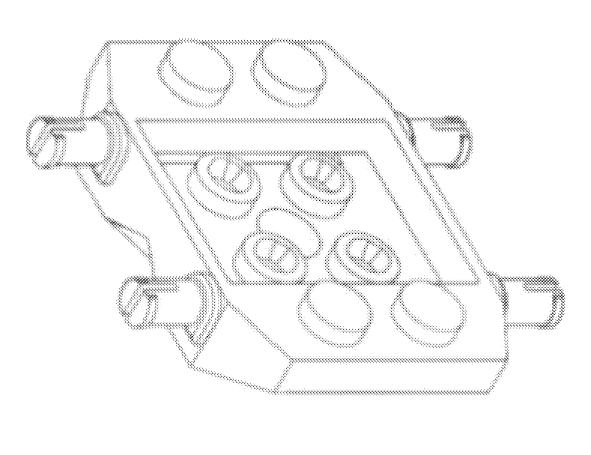 The patent on that design is expected to expire in 2034.

One may think that in order to make elements that are free of patent infringement, it would be sufficient to be aware of all of TLG's non-expired patents. However, anyone can be granted a patent for a LEGO-compatible element. Here's another recent patent: 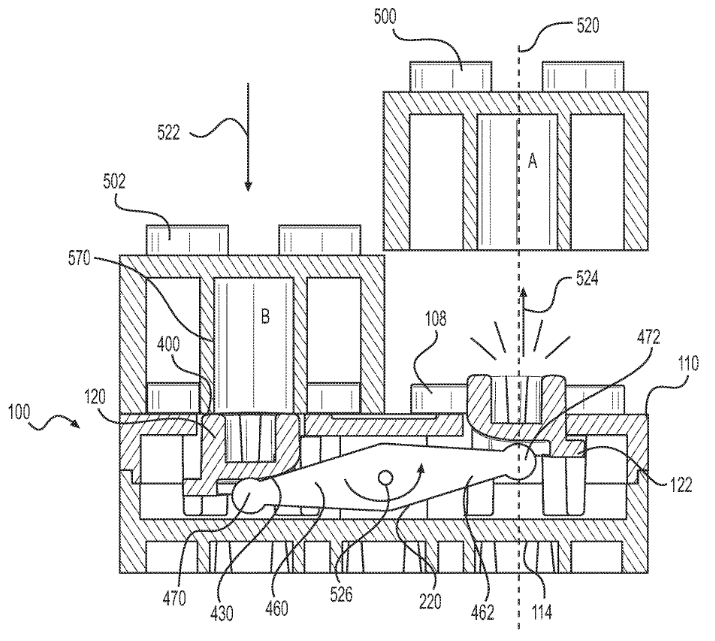 That patent was awarded to Mega Brands, so even TLG can't make that element until the patent expires in 2036. Unfortunately, determining which designs are patent infringing currently and which are not is non-trivial, and there is a reason these companies have legal teams.

Thankfully, there is a somewhat simpler answer to the question:

If an element already exists, and was created long enough ago that its patent would have expired in the jurisdiction of interest, it should be free to use.

This does assume that the element is not eligible for trademark protection, but it seems that most are not. Anyone can manufacture and sell a LEGO-compatible 2x4 brick in a product. All other common building elements that were around in the 80s, or obvious extensions of these elements such as the 1x5 plate, should also be fine. Beyond that, it gets complicated.

18
Which resolution is necessary to print bricks with a 3D printer?
8
Are coloured bricks used by Set Designers recycled to make black bricks?
4
Which of these parts are LEGO elements?
9
Why are pat pending bricks rarer and treasured more than patented bricks?
9
Which blocks are these with small round knobs?
17
Are these bricks old LEGO/Duplo clones?
3
Which set are these Mega Bloks pieces from?
4
Which is more environment-friendly: LEGO bricks or Mega Bloks?
5
Which brand made clone bricks with "HL" on the studs?