I was wondering if there is a difference in the amount of torque transferred to the wheels from a LEGO SPIKE prime angular motor (45603 LEGO Education SPIKE Prime Medium Angular Motor) depending on:

The motor and connection points (axle and 4 holes for pins) 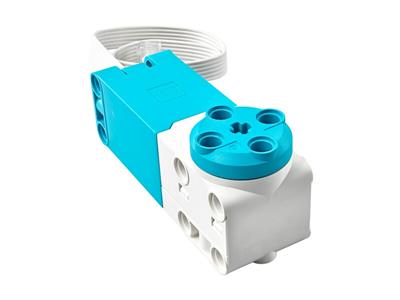 Wheel connected only by axle 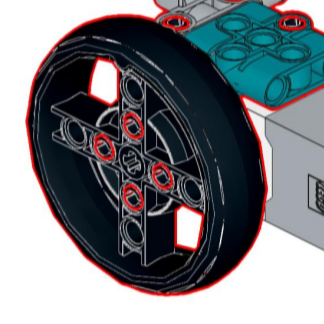 It feels like using black pins would be better, as the axle would have to turn a lot harder to rotate a wheel (torque about a point is related to distance from pivot point to the point at which force is applied). Does it apply in this case too?

The reason for my question: my Lego team is building a robot that needs to push on a bar. In this case doing things slower than faster can be better as the motion is more controlled. Would I be able to push with greater force using a 4 pin configuration vs a single axle?

Does this theory transfer to real life: eg cars, trucks, etc? Would the number of lug nuts and distance from center affect the vehicles motion/efficiency?

TL;DR: Unless you do something quite extreme engineering, any coupling will do just fine and the motor will stall or the tire will slip before even a single axle gets to its limit.

The pins have a much higher shear strength than the twisting solidity of an axle. (I don't have the numbers ready, but I'm sure some have performed measurements regarding these values, and it seems intuitive too.)

Therefore if the wheel encounters heavy resistance, while the motor is turning very hard (as in, "almost impossible to achieve with standard LEGO parts" hard), then a single axle will fail by a lower torque than two or more pins. The coupling that can transfer the most torque before anything breaks is definitely the combination of four pins and an axle, maybe with additional 3mm bar pieces stuck into the pins.

But by the time you get to torques where this kind of coupling would be required, you are already working with such extreme gearing, that you need to employ specific building techniques suitable for high forces everywhere else too.

Responding to your edit:

In this case doing things slower than faster can be better as the motion is more controlled.

Sounds like you need a reduction gearbox, which would result in slower speeds and greater torque. This would mean that your motion can indeed be controlled better.

Would I be able to push with greater force using a 4 pin configuration vs a single axle?

As detailed previously, the method of affixing the wheel to the motor does not influence the force between the wheel and the ground (as long as it's a static coupling and not a force converter of some kind).

Does this theory transfer to real life: eg cars, trucks, etc? Would the number of lug nuts and distance from center affect the vehicles motion/efficiency?

The common theory is that real life vehicles need a gearbox as well to be able to operate in a wide range of speed-torque ratios while using the same engine. And their designers need to be mindful too of the rated limits of the parts used - but in your case LEGO pretty much did this job for you by producing motors and parts that can almost always be used together safely without calculating shear and torsion strengths.

An 18-wheeler truck has a lot more wheel lugs, as the forces generated are a lot larger than in case of a two-seater minicar, therefore requiring more material to ensure they don't fail even under the heaviest loads (emergency braking with full load at highway velocities). With both vehicles the lugs act as a 1:1 static coupling between the axle and the wheel, just the range of forces (or torques) that needs to be handled safely is much wider.

Nevertheless, you can easily set up a small experiment, where you stand a kitchen scale on its side between a fixed object and your bot, and measure the force your bot can push the scale with. This would help you see the lack of difference between the single axle and four pin versions, and later on would be useful to test different gearing solutions.