Is there a way to build a stronger LEGO ball than what was done by the Mythbusters?

In one episode, the Mythbusters busted a fake video by building a 7' tall LEGO ball. The construction did not roll very far before falling apart. 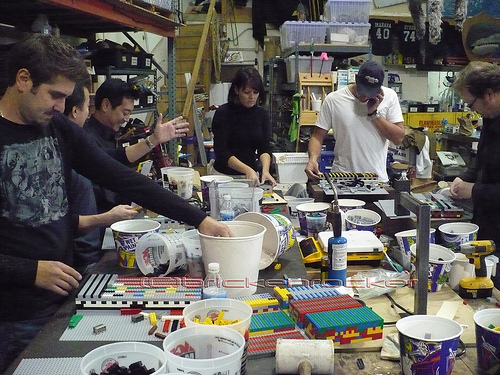 Assuming that they only used standard bricks (with studs on top only), is there a better build pattern to make a stronger ball?

Extra info: They explain their build method in this video.

There is a problem with the Mythbusters building technique.

One of the first things you learn about building with Lego is that, if you want a stable structure, your bricks need to interlock as much as possible.

The Unofficial Lego Builder's Guide illustrates this rather well:

Unfortunately, to make the build easier the Mythbustes team assembled a series of large blocks and then assembled these meta-blocks into a ball. The problem with this approach is that it creates lines of weakness between the meta-blocks.

In the shots of the ball falling apart you can clealy see these sub-assemblies inside the ball, which suggests that it did indeed break up along the lines of weakness between them.

For maximum strength, the Mythbusters team should have built the ball in layers of single bricks, ensuring that in each layers bricks bound the layer below together as much as possible.

All that said, I don't think that the faulty building technique really invaidates the Mythbusters conclusions. There is simply no way that a Lego ball of that size would remain intact. You would expect, for example, that the outermost bricks would fall away in exactly the way they did in the Mythbusters. And in fairness, building the ball with fully interlocking bricks would have taken considerably longer than doing so the way they did.

Of course, if they're willing to supply the bricks, I'm sure we could try to do it better for them!

You could use lego technic and that would make the ball really strong, or you could cheat and glue it together! the other idea i would have would be to make the ball as curved on the surface as possible that way when the ball rolls, less stress is inacted upon on single point on the surface- which lead to the breakage on film and cracked it wide open! so not only a slightly different method used but also a different shape could used to make the ball more ball shaped other than a blocky version- the lego theme parks have many examples of near perfect curved surfaces so this could be done- with a few extra different shaped pieces and not just the ordinary building blocks as seen on the programme. Also as a general point but i didn't see anyone on the programme that could call themselves an experienced lego builder?...unlike james may did in his version.