Is there a list of colours currently in production?

Is there a list anywhere of colours currently being used by Lego for new sets? There seem to be lots of comprehensive lists of all colours released ever, but few that relate to in-use colours, for instance only including the new blue-greys rather than the old greys.

I'd also be interested to know if any colours are limited to certain themes only (e.g. Friends) - or whether all colours are open to designers of all themes.

As I answered on another question, LEGO officially released its internal palette in 2010. It showed 51 colours in use, although their company profile spoke about 58. 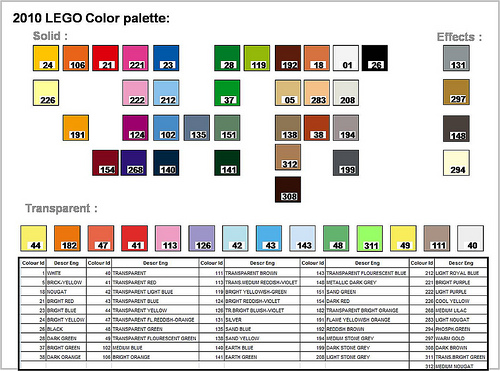 This is the Palette LEGO used in 2010, meaning that only these colours were in production then. Unfortunately, LEGO doesn't release this info on a regular basis (I'm frankly quite surprised they did in the first place), and I don't know if it has been updated since. On the other hand, LEGO has learned not to change their palette too often, so it's likely there hasn't been much change since then.

Edit: I was optimistic in thinking there would be little change in two years time. As you ask, there are two Friends colours "Medium Azur" and "Medium Lavender" which new for 2012 and are thus not present on the list.

The list of colours on BrickLink has date information which you'll certainly find useful; for example "Olive Green" is of course new too (and is bound to become extremely popular), "Spring Yellowish Green" and "Light Glow" are also new; and "Aqua" ("Light Aqua" on BrickLink) , "Dark Azur" and "Lavender" all appear to have been introduced in 2011.

You could also try to see which colours have been phased out, but since the BrickLink list appears to be based on the year in which a set is first introduced, it's probably not too reliable. For example, the "Light Stone Grey" used in mindstorms (or "Very light Bluish Grey" on BrickLink) is stated as last seen in 2010, but since the NXT 2.0 kit is still sold, it's possible it's still produced. So trying to know whether a colour is out or not is at this stage a guess, although I would at least venture to guess that "Phosph.Green" is out - since there's a new "glow in the dark" effect.

Now that you mention it, it would make sense however to lower the entry cost for specific colours in specific themes to make sure designers aren't penalized. What I mean is, if a Friends designer needs a specific part in pink, there's less reason to deny it to him than there would be for, say, a Technic Designer. Usually producing an existing part in a new colour bears a cost for the set designer, but there could be different rules depending on the theme. It's pure speculation, though; and it's as likely that the theme doesn't do any difference at all.

In any case, once production has been decided for a specific part in a specific colour, it's certainly available for all other designers. The only exception would be part-specific (for example, a city designer is probably not allowed to use a Star Wars stormtrooper helmet), but I see no reason for having such restrictions on specific colours.

34
How many different colours of LEGO bricks are there?

34
How many different colours of LEGO bricks are there?
4
Color Specific inventory list
19
What is the rarest LEGO production element (colour/shape combination)?
4
Vintage heads still in production?
5
In what colours can I build my whole model?
9
What Lego set has the most unique colours?
38
Why was LEGO reluctant to use additional colours for regular bricks in former times?
6
Colour matching LEGO colours with paint