How does LEGO handle the breakage of Hero Factory sockets?

My son has a slowly growing collection of Hero Factory figures, and they have accumulated a consistent problem: socket connector cracking.

The tips of the angular part of the limb which connects to a socket tend to split, causing loose limbs, then eventually a separation of the tip, which causes the limb to fail connection with the socket. 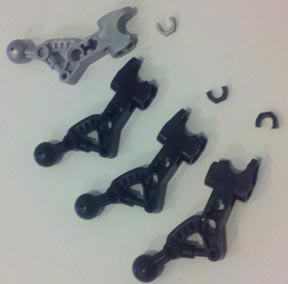 This is through non-daily, low use. Are there ways to prevent this? What is LEGO doing to address this?

I've started to notice LEGO (and even Megablocks) using similar ball socket connections on non-Hero Factory toys, and expect this sort of failure to be common. I've not seen breakage of this kind through my multiple decades using LEGO.

Per the recommendations below, I've contacted LEGO about this issue.

I am so sorry to hear (and actually see!) about the broken LEGO elements that you have. Here at The LEGO Group we hold ourselves to an extremely high quality standard. The fact that your elements have broken is something that we take really seriously. We would be more than happy to send you replacements for these pieces right away. If you would be so kind as to provide us with a little bit more information on the parts, we will be sure to help you out.

After a little research, I let them know the parts were from either Stormer (7169) or Breez (7165) depending on the color, that the other limb ends from those sets were separating in a similar fashion, and asked whether they had noticed similar faults with these types of pieces historically (morbid curiosity).

Thanks for getting back to use with the sets that you have broken pieces from. I am so sorry to hear that these parts have broken. That is unfortunate. I was able to pull up the image of the parts that you sent with your original email and was able to see the exact pieces that you need. Sadly, these parts have been discontinued and we are unable to replace those parts for you. I do apologize for this. I wish there was some kind of replacement to send, but sadly, there is nothing as a substitute for those parts.

Again, we wish we could help you restore your LEGO set back to new but unfortunately the pieces you need are no longer available through us. There is hope though, Peeron.com is website run by a group of LEGO fans that contains information on LEGO sets, replacement parts, building instructions and more. It’s not affiliated with the LEGO Group but we know from other fans that it has a good collection of older building instructions to download, discontinued pieces to purchase, and great set information.

This was a common problem with ball sockets in Bionicle figures released between 2007 and 2010. The first wave of Hero Factory figures, which the pictured elements are from, also used this style of socket, as well as regular bricks with ball sockets released during that time.

The problem has been addressed by The Lego Group, and the new ball socket elements produced from 2011 and onward are much stronger. An exception to this is the 2012 wave of Hero Factory figures, which uses the same style of head piece as the 2010 wave and has the weaker socket (although none of mine have broken yet). However, as of 2013, the figures use a brand new head piece with a stronger socket. As far as I know, the older head is being discontinued like the elements in your picture.

Each time I've heard someone from LEGO speak about quality, they tend to insist on on simple message: they can't do anything on a problem they don't know about. This may seem very obvious, but they feel it needs to be repeated anyway.

What this means is that they want every single customer with any quality problem to actually report it. Apart from the fact that they always help customers directly, they record all of it and the number of times a problem is reported is also a good indicator for LEGO that the problem is serious and needs to be addressed.

A simple example: instruction books and sticker sheets regularly ended up bent or damaged. Through the number of complaints this generated, LEGO has learnt about the problem and how seriously it was perceived by its customers. As a result, instructions and sticker sheets are now packaged (manually, I might add, which has an extra cost) in a sleeve with a cardboard to protect them, at least in bigger sets (again, because of the cost).

So, in a nutshell, that's the most important thing LEGO does about all quality problem: they listen.

I have no way of knowing myself if that particular problem of ball joints in Hero Factory figures is very widespread or well known, but the more people report it to LEGO, the bigger the chance it's going to be solved. And in the meantime, everyone who contacts them will get replacements anyway.

So I would advise you to just follow that route: each time you get a broken part, go to the LEGO customer service Replacement Parts page, select "a piece broke while building", type in the set number and select the part which broke. You'll even get a chance to enter in detail what happened. So you'll get a replacement, which solves your immediate problem, but in the background LEGO might learn that this particular part is too fragile if a lot of customers report the problem.

One last thing which needs to be said is that even if LEGO is aware of a problem, or addressing it, or maybe already solved it, it may take time for the solution to reach the public. A new, enhanced version of a part might not appear in sets before the stock of the other version has been used, for example (unless the older version is so bad that LEGO will recycle the stock entirely, of course, but that probably doesn't happen too often).

Note: I apologize if this answer is very generic in nature and doesn't address the ball joints specifically (thus no answers on the "are there way to prevent this" part, although I guess a little bit of soap might help), but I feel it's very important to understand how LEGO deals with quality problems in general.

Not the answer you're looking for? Browse other questions tagged piece-information durability replacement-parts hero-factory or ask your own question.

17
What does imprinted information inside bricks mean?
5
Why does the pin recess on the Technic turntable continue to the edge of the part?
8
How can I find out what parts are in a Lego set?
6
Lego Racer kit with Chargeable Cars
7
How to make LEGO unbreakable
9
Which blocks are these with small round knobs?
2
Re-building sets - paid services?
2
Problem With Bionicle Joint Sockets Cracking, Repair Options?
1
Looking for sets with lots of printed parts or other special parts to use as components for my city