What is the rarest LEGO production element (colour/shape combination)?

What is the rarest LEGO element according to the following criteria:

I would tend to say that any part produced for only one set would qualify, especially if said set is priced high. Looking at the inventory of 10179 Millenium Falcon UCS for example, the following candidates come to mind:

Considering the price the set goes for nowadays, and the fact that most people who buy it will probably build it once and leave it so (that is, if they open the box at all), I think the grey boat mast rigging is a very good candidate. There are four people selling some on BrickLink as of february 2013, but a glance at the prices asked comforts me in my reasoning. Even the printed radar dish is cheaper.

I'm not sure whether to consider these real Lego parts or not, but many of the old HO scale vehicles and greenery are incredibly rare. For example, the Jaguar is quite rare in any color, but especially in red and black. 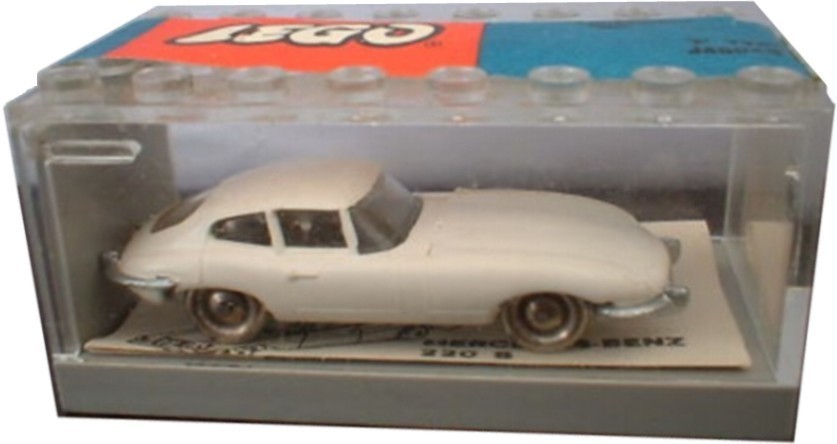 To be honest, I don't know if this is especially rare. I do know, however, that to find the rarest part we'll need to factor in:

1. Parts that appear in small numbers in very few sets

Often, rare parts have an unusual design or colour.

2. Of those, sets that had a limited production run

3. Of those, parts that are unlikely to have survived the ravages of time

All things considered, I imagine that the rarest piece of proper LEGO is from one of the oldest sets: which is why I suggest something like, "712pb01 Plate, Round Curved 4 x 8 Left with Red Line on Curved Edge Pattern" that appeared in a single set in 1958.

Alternatively, (if you care to count them as part of the system) many of the parts from the 1940s Automatic Binding Bricks era will be quite rare by now.

I was just reading about the 8485 Technic Control Center II, where you can make a dinosaur, helicopter, or hovercraft controlled by a big panel, and which I have on hand. According to a reviewer (http://www.eurobricks.com/forum/index.php?showtopic=75864) there are a few rare pieces that were included with this set, which retailed for $219 in 1995. The price of the set and quickly-outdated electronics probably could imply that the set is relatively rare. Some of the parts are pictured here - http://www.flickr.com/photos/mostlytechnic/8158411568/ Red wing plates (x2 Left, x2 Right) that were used in the helicopter build, and one other set. Little white coils for bundling wires together, only used in an earlier Multi Control set and educational sets (probably quickly lost). And a black steering yoke used in the dinosaur build - only ever included in this set. It was released in white in a 1980s car set.

This might be one of the rarest individual parts that's not from a promotional or movie-themed set.

Based on the conversation in this thread, the 2x4 brick in trans-neon-green is also quite rare. Last selling price on Bricklink was from Oct 2014 and was set to $75.

It is the only chrome green part.

How about a surprisingly rare part: the Lime Green 1x1 plate. Only produced in one set in 2005.

It's impossible to provide an accurate answer without accurate information to base it off of. Without knowing production quantities on every set, it is impossible to know if there's a part that only comes one per copy of a set that sold 10 million units, or if there's another part that only comes ten copies of a set that sold 10,000 units. Age of sets can also affect the answer because parts that have not been made in decades will exist in much smaller numbers now than when they were brand-new, due to all the various ways that a LEGO part could be destroyed over the years. Some sets have been recalled and changed, which may have allowed a small number of a rare element to make it out into the wild, after which the supply was cut off. And some elements have been retired almost immediately after they were first put into production. Assuming stuff like SDCC minifigs are excluded (not meant to be sold), I have to put my vote on 8-spoked wheel #51377. In 2005, they first introduced this wheel in metallic-silver for a Designer set and a Tiny Turbos set. In 2006, they produced it in pearl-gold for the first Batmobile and the Catwoman/Dragster set. Before those two Batman sets went out of production, they had introduced the reversible wheel #55981 with six spokes on one side and bolts on the other. In the two Batman sets, they replaced the 8-spoke wheel with the new reversible one, which means they made the 8-spoke wheel in pearl-gold for only a few months before the mold was permanently retired. I bought one copy of each Batman set at release, and a second copy soon after, and only got the 8-spoke wheel in the first copies I bought. And that's too bad, because it's a really cool looking wheel.

Antannae piece from the 70s. The ones nowadays are almost all broken, so these are rare. Also Chrome Gold 2x2

12
Where to find this green transparent brick?
1
What is the rarest LEGO set ever produced?

35
What is inside the "weight element" brick?
16
How to find out if an element is out of production
7
How do they decide when to remove an element from production, and what happens to the molds when they are retired?
11
Why does Lego restrict the number of colors per shape?
6
How many styles of element separators has LEGO produced?
27
Why do some sets contain parts of an unrelated colour that are hidden on the final model?
12
What element is this a piece of, and how can I repair it?
11
Do LEGO prototypes have production numbers on them?
3
What is this element ID?
6
What is the quietest LEGO motor?