Why does LEGO now use studless technic designs?

It seems to me that sometime between 1998 and 2006 (between the Mindstorms RCX and NXT), LEGO switched from using studded technic bricks (like this:)

In my experience, people much more readily understand how to work with the older style of technic, and I was wondering if anyone has insights on why LEGO changed it.

The studless have SEVERAL advantages over the studded design especially when you want to include moving parts. Just the clearances between connections is important. Sariel sums it up in his book well. He says there are advantages to both systems (stud-full, for example, are more rigid) but the fact that the stud-less look more realistic and, of course, the clearances, make a huge difference. I think the change was NECESSARY to build more realistic models (realistic looking, arguably, but the new models are very mechanically clever in ways that would be impossible with the stud-full parts).

According to Jamie Berard, these advantages were a major part of the gradual migration, as was a flaw in the studded beam design-- the holes in studded technic bricks are placed slightly incorrectly according to the LEGO "System". That means for technic model designers, working with studded beams (and staying "In System") provides many difficult challenges.

I think the most important aspect is a matter of geometry.

With studded beams, you're constrained by the form factor of the regular LEGO brick, which isn't a cube but a 5:5:6 cuboid. This means that every time you need to change the orientation of things, you'll have to think about how you're going to do it, and use plates and whatnot between beams. It's perfectly possible, but don't be surprised if most of the beams in older Technic models are studs up.

With studless beams, none of that. Orientation of the beams doesn't matter much anymore since they'll fit nicely on a cubic grid. This allows for greater flexibility and, indeed, more realistic models. (Some people also like smooth surfaces better.)

Also, the studded beams had some design issues. The obvious one is the offset between the Technic holes and the studs, which isn't exactly a problem but can still be a nuisance at times. The less obvious one is that the Technic hole in beams is actually slightly too high, meaning it doesn't interact well with the rest of the system. See also this answer and the linked pdf inside for more information on illegal builds. These two design "flaws" didn't matter much when the beams were first created, but nowadays LEGO perceives this sort of incompatibility much more seriously. They still produce studded beams, but I wouldn't venture a guess on how long that will last.

At first, more odd axles have been introduced (most notably 7 and 9), then the universal join was shortened from 4 to 3 (the old one was last seen in 2008, so it's probably gone for good), and more recently the differential has also been remade (there's still one in the 2011 Unimog, but I don't know if they'll actually discontinue it considering it has a function the new one doesn't have.). I don't see any other part left that needs to be updated from even to odd, but considering how often they use a #2 connector just to connect axles, I wouldn't be surprised if they made a 3L version of the axle connector at some point

Manufacturing the studded beams is significantly more complex and hence more expensive. They have more plastic in them (they weigh more) which also pushes up the cost. But the mould complexity is the real killer. If you look carefully there's a void over the top of the holes in the beam. That means moulds with moving parts, and the more parts the more it costs.

The design is also not ideal from a rigidity or symmetry point of view. There's a solid bar of plastic along the top under the studs, but just two thin sidewalls at the bottom. That means the centre of flexion along the beam is much closer to the top than the bottom, and I suspect that getting the moulding temperature and pressure right to get straight beams is harder than for symmetrical parts.

Note that some of this also applies to standard 1x16 bricks, except that the mould is much simpler.

I have to chime in here that I've thought about this for a long time. I believe the all out move to studless is primarily driven by patenting, and only secondarily by improved realness. Lego had used the studded design for decades prior to the switch; they began full transition in close proximity to the original patents expiring and beginning to lose patent lawsuits. What is the only solution to that?

Branding (read: licensed themes) and new ideas (read: new patents). When it comes down to it, that toy company we all love(d) is actually a very well-managed business with strong survival technics (pun intended:) 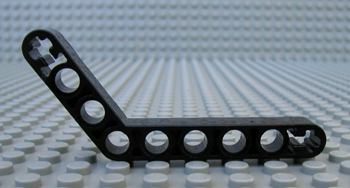 With studs Lego could produce similar bricks however it seems less obvious how they would look like.

The benefits of having these curved bricks are just better designed models. Set 8880 (the big Technic car from 1994) is an example how Lego had to go trough great lengths to get corners and angles in their design. With studless bricks you can have the angles and corners already. I think it is an improvement.

I suspect Lego was because of these studless bricks with corners able to phase out the awkward Technic Connector Toggle Joint Toothed brick which turned out to have too many issues after all. 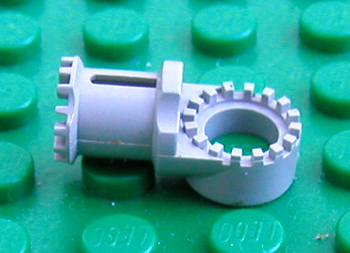 What I find really weird is that the studless beams aren't square in cross-section. How difficult would it have been to make them exactly square? But instead the width between the surfaces with the holes in them is the same width as a studded beam, while the width between the smooth surfaces is very slightly less. Although this doesn't matter in all the typical vehicle-builds that lego make, it's decidedly untidy when combining studded and studless, and it makes for unnecessary headaches if you try to build anything unusual (for example you need a studless beam to slide exactly in a hole, smoothly but without undue sideways wiggle). It seems very un-Lego, where normally the dimensions are either set by history, or designed so that all sorts of unexpected constructions remain possible.

I notice that the whole studded versus studless argument didn't develop in the straightforward way most of us expected. Lego Creator has become quite "technical" in its construction, while remaining studless - a lot of the old studded technical pieces are staples of Creator, and odd studless bits drop into it too. To my mind, Creator is often where Lego is at its most creative. So presumably the cost of making studded "technical" Lego wasn't so disastrous.

I do think the Patent argument has a lot of truth. Studless developed at a time when studded was going out of patent and all the world and it's plastic-moulding friends were producing knock-off Lego-compatible building sets. Since then, we've realised that most (all?) of them are excruciatingly low-quality, so they simply aren't the risk to Lego that they first appeared. And some of them are no longer all that cheap compared to the real thing.

Not the answer you're looking for? Browse other questions tagged technic piece-information or ask your own question.

32
Why did Technic bricks have holes in the studs?
8
Exact dimensions of studless Technic beams
11
Why does Lego restrict the number of colors per shape?
5
Why does the pin recess on the Technic turntable continue to the edge of the part?
5
Are both of these slope designs genuine LEGO?
2
Use for "Technic Coupling, Tight" and "Technic Coupling 3,5-6 Ncm"
3
Why are my Technic blue pins breaking?
7
Why do Technic beams have an odd number of holes?
6
Overview on how to use special Technic parts?
-1
Why does this "useless machine" use out of production parts?