I'm building a (what I hope to be) high-speed car using two PF-XL motors together and some gearing up. However, there's a point where I have to rotate the axle with power (that comes from the 3 speed gearbox) 90 degrees to line it with the wheels (this is probably a long way around the barn to say it in english, but I got a picture to fill my lack of words). This is what I want to do: 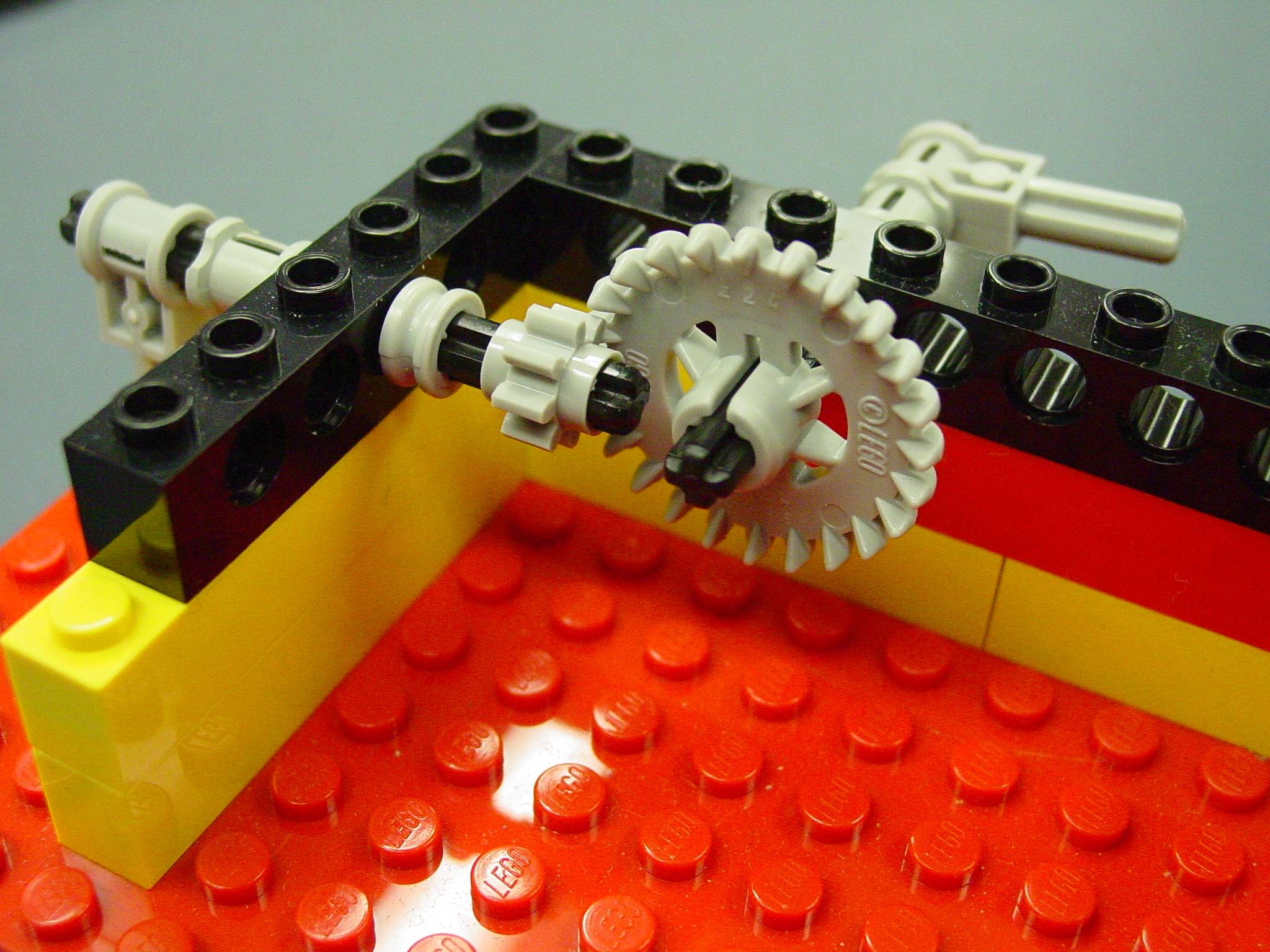 (the position of the gears is incorrect: in my project the 8t gear would be one hole to the left)

My question is, assuming the structure holding the wheels is solid and won't bulge, what's the best gears to use so that they won't snap?

It stands to reason that the last option is the strongest because they don't snap unless they break apart. However, they're more suited to low speeds. With high speeds they aren't fluid at all and make a lot of noise. But my biggest problem with them is that they sometimes get stuck (the gear without power sometimes stops in a position where it blocks the gear with power and when the motors start again they can't rotate - this is really bugging me).

So, excluding the last option, what do you think?

I would tend to recommend some options which you didn't consider yet: using bevel gears, but actually use a combination of two gear on each axle: a 12t one (the thin one, as you say), and behind it, a 20t one (there you can use a fat one, which will probably be better).

Another option is to use a worm screw, which will also allow you to change the direction of the axle, but which makes the axles non coplanar.

But it really depends on a variety of factors. Gear reduction is one (keeping in mind it has implications on torque, but frankly I'm already way over my head here so I won't tackle that aspect); but torque transmission is another, and so is strength/reliability.

For example, the knob wheel that you did mention has some uses, as it practically can't slip, but at the cost of lower torque transmitted (or something). Worm screws again have another particularity which is unique to them in that they can transfer torque only one way, which also has its uses (locking a mechanism in place).

And then don't forget that the gears aren't all there is to say: sticking your gears closer to the beams will help, as will replacing the two separate beams by an actual frame. You can also make sure one of the axles goes all the way to the other side of the frame.

And last thing, if you're going to transfer power to two wheels, don't forget to use a differential between them (not sure the new one is very solid though).

Not the answer you're looking for? Browse other questions tagged gears or ask your own question.

9
How can I transmit horizontal torque to vertical?

16
How can I fix a flattened gear?
2
Parts/Step not fitting ( technic / gear not aligning)
8
How to build a limited slip differential?
8
What is the "Module" of a LEGO gear?
6
Which combination has a lower gear friction?
3
Clutch gear test
5
How to best transfer power at 90 degrees for high torque applications
3
Lego Technic 60C01 Clutch Gear Bore size
3
Gearing problem
8
Insert a gear into a turntable?