Why are LEGO sets put in such big boxes?

I am wondering why LEGO puts sets in big packages. All bricks are put in small plastic bags and from my experience the packaging could be at least half of what it is.

There is so much told these days about ecology (especially in the EU, where LEGO has its seat), the smaller boxes would lead to better use of containers, so less CO2 during transportation and so on.

I understand that larger box "promises" something BIG inside, but could also lead to some disappointment.

When I was a kid and had my own sets, I'm sure they were relatively smaller.

I think you're just discovered a "downsizing". This word has many explanations and definitions depending on aspect of life, where used. But in influence and manipulation the meaning is clear and partially explained by Josh. Your brain assumes the bigger package is, the bigger value it has or the bigger contents you're getting.

The key to the success is that in most cases, the differences between reduced and competitive products are so slight that customers don't realize they've bought less paying the same (not adjusted price). But since the not noticeable difference is multiplied by thousands or even millions of sold products, customers see no difference and the company saves or earns extra millions of dollars.

This works in every or nearly every aspect of shopping. If you'll see two milk shakes, two washing powders, cakes, butters, milks, anything and one of them will be in a bigger package than the other, you'll most likely automatically pick up the bigger one. Your brain assumes that this is better for you. LEGO is no exception here and I'm pretty sure that if they wouldn't receive negative response and push from eco-oriented organisations (what RegDwight explained) they'd continue their politics.

This works brilliantly (for the manipulator, not for you, of course), especially if you're doing quick shopping in a large mall and you reserve seconds or even split seconds for the process of selecting a particular product over another one. You're often fouled by manipulators using downsizing — bigger packaging does not necessary mean higher volume. I saw (too) many examples where the customer selecting a bigger package was in fact getting a smaller volume. But due to the very limited time for decision, they only checked the size or weight at home, or [erhaps never.

Some sources claim that a big pinch in the bottom of each or nearly each wine bottle is in fact another example of downsizing, not a handy catchpoint allowing the bartender to hold the bottle in one hand. If you pinch-up the bottom of the bottle that much, you can produce a bigger (wider) bottle, that contains the same amount of wine a competitive company offers. But since your bottle is wider (thanks to pinch-up) your customer will most likely choose your bottle, not the competing one.

Downsizing in influence is sometimes called "A British Airways olives example" after the first documented use of this mechanism. Which, at the same time, explains why it is so common and so often used to foul us. Many years ago, British Airways managers calculated that removing two olives from drinks served on board all their planes would reduce the overall costs of flights by millions of pounds in a year's time. They went ahead and thus downsizing was born. Customers were getting less than competitive flight companies offered, but the difference was not noticeable, so nobody complained. When this small difference was multiplied by a number of flights British Airways serves on each routers during entire year, company savings were at level of tens of millions pounds.

Actually TLG are listening, and in fact are replacing boxes with smaller ones right now as we speak. 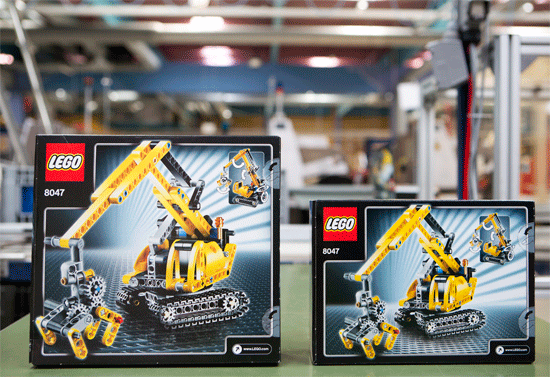 These new boxes will have a FSC (Forest Stewardship Council) certification “which lowers the CO2 impact of its packaging by about 10%.” You will be able to start seeing the smaller boxes this year and by 2015, all of the products will be in smaller boxes. With this change, LEGO will save about 4000 tons of cardboard which is about 18% of their current consumption. These new boxes will come from sustainable forest so less trees will have to be taken down.

[...] LEGO is also involved in other plans to lower their carbon footprint. About 25% of the emissions are from manufacturing of the bricks themselves so they’ve made plans to mold the bricks more efficiently. The company also has invested in wind energy to improve their energy consumption.

Now, as to why the boxes were huge in the first place, I can't tell. I heard all kinds of theories over the years, from "so the parts have room to move and don't get damaged" to "it looks more impressive on the shelves". But as this recent move demonstrates, all these reasons could either be worked around, or were negligible to begin with.

When I asked a LEGO employee this, I was told, "Because the retailers tell us to". They went on to tell me that consumers' perceived value of $200 toy is influenced by the size of the box it's in. If some other random toy is on the shelves next to $100 LEGO sets, and the random toy is in a huge box and is only $9, the reptilian part of your brain goes wild and wants the $9 bargain. Look at LEGO sets on the shelves and you'll see there is a strong relationship between price and box size, but not so much with the volume of plastic parts inside. My understanding is that they've been able to talk their way into slightly smaller packaging, but there's still a huge amount of air in there.

Not the answer you're looking for? Browse other questions tagged packaging or ask your own question.

0
Why are the Lego boxes so unnecessary big?
12
Any reasons for the introduction of the new-style raised arch?
9
How can I preserve opened Lego packages?

39
Why do LEGO boxes have a maximum age limit?
22
Which sets can be built in the bag (all the parts are in one bag)?
23
Why does LEGO state the number of parts on US boxes, but not in Europe?
13
Are the plastic bags inside the LEGO box recyclable?
4
Why are the plastic bag designs different? Bag 4 looks normal, but are the rest legitimate LEGO designs?
7
Is there any rhyme or reason to the sizing of LEGO boxes?
6
Is there a reason why there's sometimes multiple "Bag 1" bags in particular sets?