Has anyone made their own custom LEGO bricks?

As I've just learned, LEGO bricks are made from ABS plastics.

I wonder if it would be possible to make some simple molds at home, get some ABS pellets, melt them up and make your own custom bricks? Novelty shapes or colours, perhaps?

Has anyone tried this, did it work?

People with 3d printers have made their own LEGO bricks. The plastic used is ABS. 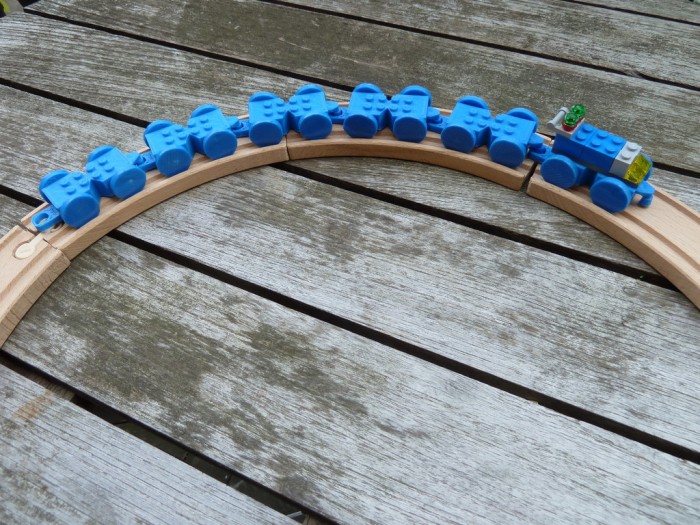 Interestingly, 3d printers can be constructed out of LEGO parts - you could have it self replicating!

Of course, you would need a very expensive and high quality printer to make good pieces. Cheaper ones can only make hollow bottoms and the banding from manufacture is highly visible.

Big Ben Bricks sells some custom LEGO-compatible elements, mostly train wheels. Since they produce sizes which the LEGO company doesn't, they have some customer, but the production cost is usually quite high for such a quality.

BrickForge does sell custom elements too, and so do BrickArms. Usually, custom element producer will focus on elements the LEGO company is not likely to make, either because they feel the element fills too small a niche, or because they don't want to (arms). Yet there is some demand, so these sites aim to fill the gap.

If you've got ideas, maybe contacting one of those would be interesting, either to learn about their processes, or to suggest the part.

Yes, is it definitly possible. However, as this page states:

Producing physical prints from our provided 3D models prompts certain fabrication considerations. According to Wikipedia, the precision of Lego pieces is less than 10 microns. As of early 2012, however, standard Makerbot printers have an XY resolution of 100 microns (0.1mm) and a default layer thickness of 360 microns (0.36mm). We thus caution that fabrication of the Free Universal Construction Kit with current (2012-era) solutions for DIY stereolithography, such as the Makerbot, Printrbot or RepRap, may lack the precision required for reliable or satisfactory coupling with standard commercial pieces. A great deal depends on how well-tuned the printer is; thus, your mileage may vary. In any case, we expect this situation will improve gradually, but inexorably, in tandem with improvements to these vibrantly evolving fabrication platforms. The artist’s proof shown here was created in a UV-cured white resin using a commercial-grade Objet (“polyjet”) 3D printer, which has a horizontal resolution of 42 microns, and a layer thickness of 16 microns. Ponoko.com and other private fabrication services offer printing from Objet machines and other high-resolution devices.

The article cited deals with a universal construction kit that allows you to connect ten diffent types of construction sets together, and as this is a Lego site, you may not want to visit it.

However, the point being that "standard" 3D printers (such as the Makerbot or RepRap) will probably lack the precision to produce tolerable Lego bricks.

Here is a UV printer that can print on the Lego brick, see this link. https://www.youtube.com/watch?v=3OD2DCCpe2U&t=15s

And I think this A3 UV printer is good choice. http://www.wayprinter.com/uv-flatbed-printer/XP600-Epson-uv-printer-XP600sUV.html

Not the answer you're looking for? Browse other questions tagged manufacturing customization or ask your own question.

30
What kind of plastic are LEGO bricks made of?
18
Is it possible to build Lego bricks with a makerbot replicator 3D print?
18
Which resolution is necessary to print bricks with a 3D printer?
2
3d printed bricks quality?

28
Are transparent neon Lego bricks made from a different plastic than usual?
30
What kind of plastic are LEGO bricks made of?
23
Where are LEGO parts made?
11
How can I make custom LEGO packaging?
10
How do I make my own LEGO stickers?
9
Factories that could make off-patent bricks?
9
What are LEGO baseplates made from?
5
A custom LEGO velociraptor
10
Selling custom LEGO image mosaics using original LEGO bricks without breaking LEGO's Fair-Use Policy