I recently received Renegade Runner (6268), and I noticed that it has a somewhat awkward hole in the bow:

The main bow piece has a hole for some reason, but I'm not sure what it is for. Here's the part: 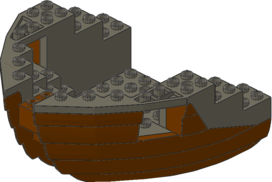 As far as I could tell, this is a list of all sets which use this part:

In each of these sets, the hole in the front is simply left open. Is there some reason for this?

I didn't intend to answer my own question, but after reading through the comments and doing some more digging, I think it is clear that this was intended to be a hawsehole (hole that the anchor rope passes through). 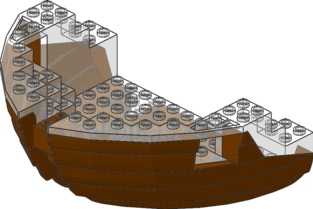 That larger part was created with the launch of the Pirates theme in 1989 and was used in the two flagships of that time: Caribbean Clipper (6274) and Black Seas Barracuda (6285). Carribean Clipper clearly uses that hole for the anchor rope: 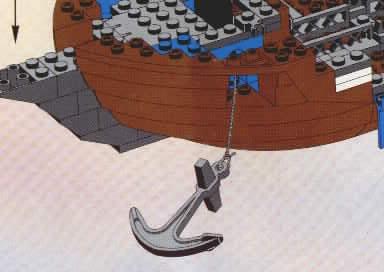 The 12 x 12 bow didn't appear in a set until 1992, so my best guess is that this hole was included to match the earlier part, but set designers ended up not actually using it for that purpose.

12
Any reasons for the introduction of the new-style raised arch?
10
Substitutions for vintage hinges
1
How to find out which set contains a higher plate percentage?
11
Do LEGO part counts on boxes include spare parts, brick separators and instruction manuals?
0
Find out the set(s) a list of parts belongs to?
3
What are some uses of part 93589?
13
Why did LEGO switch the direction of flag elements in 2008?
4
Is this a LEGO part? It looks very similar to a technic axle connector 2x3 with ball socket
18
Is this part real LEGO or a knockoff?