How many standard 2x4 LEGO elements are produced in a single 2x4 mold injection?

Just how many standard 2x4 LEGO elements are produced from a single mold injection? I realize the molds are used over and over again, but how many bricks does a 2x4 element mold produce at a time?

I seem to remember it's 2 rows of 8 bricks, with the plastic flow coming in the middle and being distributed in the mould through a pipe running between the two rows, but I can't find any reference for this.

It could very well be that future moulds are optimised to hold more, though, but that's porbably not going to happen unless there's a good reason. Another example I heard is that when they started producing 5L Technic axles, the new mould contained twice as many axles as the one used for 4L axles - with a net result that the 5L axle costs less to produce than the 4L one, which is reflected in set design. You would think they would also replace the 4L axle mould, but considering the price tag of a such a mould, it's not interesting to do so until the mould is at the end of its life (and even then, it may not be worth it to design a new one rather than to just reuse the previous design). 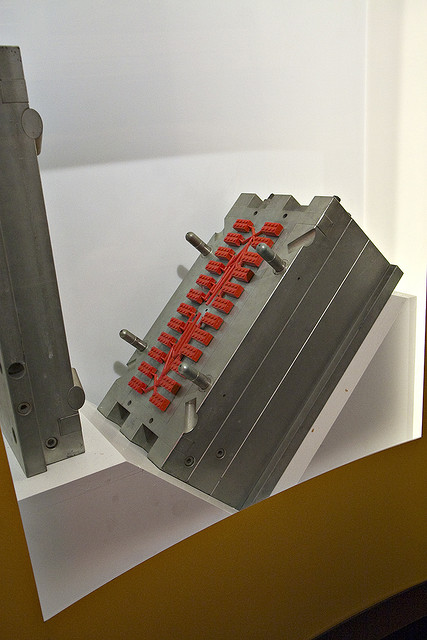 7
How do they decide when to remove an element from production, and what happens to the molds when they are retired?
17
What does imprinted information inside bricks mean?
17
How to tell the different ages of pieces
6
How many styles of element separators has LEGO produced?
5
Why doesn't lego make many 2x2x4 Pieces?
4
Vintage heads still in production?
3
Averaged out, as of 2016, how many shapes has Lego introduced per year since brick 1?
9
Why are there scratches on new bricks?
8
What is the purpose of the 8 tooth timing gear?