What advanced railroad features are possible with the Lego PF train sets?

I recently got my first train set, the Constitution Chase, and it has sparked my imagination for building train layouts. My 3-year-old son has a small collection of wooden trains and we enjoy building tracks together. His tracks include cross-overs, switches, and bridges, and I know there is a wide range of products in that family that we could pour money into: elevated tracks, etc. However, now that the Lego train has invaded our home, I feel that we'd be better served building Lego layouts.

I've seen from shop.lego.com that there are straight, curved, flexible, and switch tracks available for purchase now. However, there doesn't seem to be any of the following currently for sale:

So, given the rather limited track selection, but the otherwise infinite flexibility of Lego, is it possible to build what's missing? Can cross-overs or double-switches be built from parts? Can PF trains climb sloping tracks, or go down inclines (and how do we make the track incline properly)? Is there an easy way to achieve a figure-8 track layout?

Bonus points for solutions that stick to System pieces instead of Technic pieces, since I have more System than Technic. I am, however, willing to buy parts as needed (except that double-switch, yikes it's expensive).

You can do most things that you can do with traditional model railroads using LEGO trains. This includes cross track, bridges, switches, and inclines.

As far as I know, this was never released for either RC or PF trains. As you noted, there was a cross track part for the 9V trains. If you aren't aware, 9V, RC, and PF track is mechanically compatible, the only difference is that 9V track has metal rails. If you don't mind the look of metal rails on your cross track when the rest of your track is plastic, the 9V crossing should work fine.

You are correct that there aren't dedicated train bridges. You are left to build whatever you like.

You can make anything from a simple bridge that just holds up the track like this one based on the Unofficial LEGO Technic Builder's Guide (source): 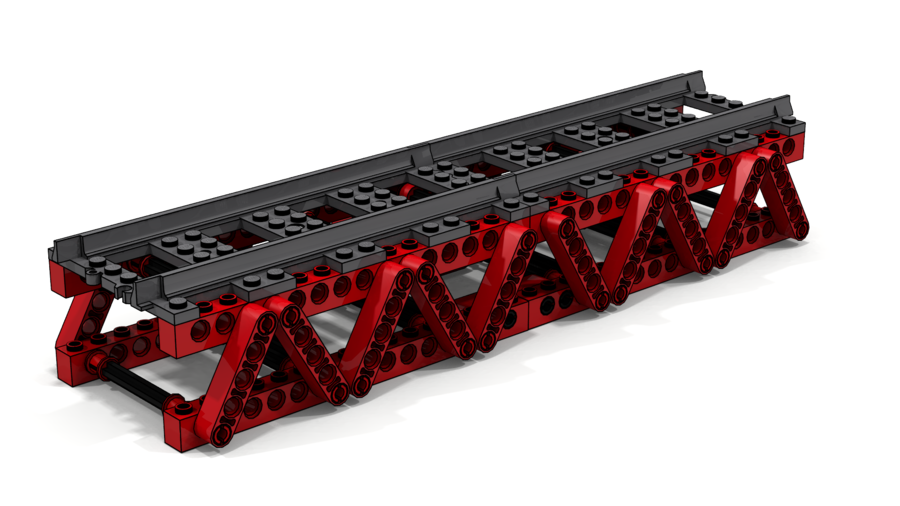 Or you can create something elaborate like this bridge from the 2006 NMRA show: 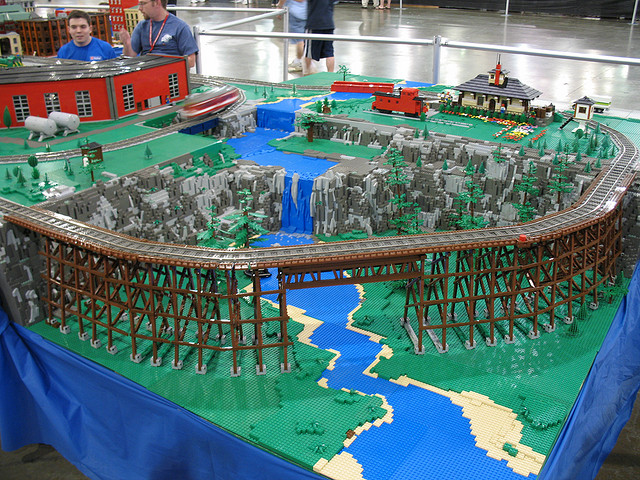 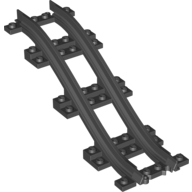 Monorails did use sloped track, so if you don't mind mixing those into your layout, they could be an easy option. Here's an example of elevated track from 6399: 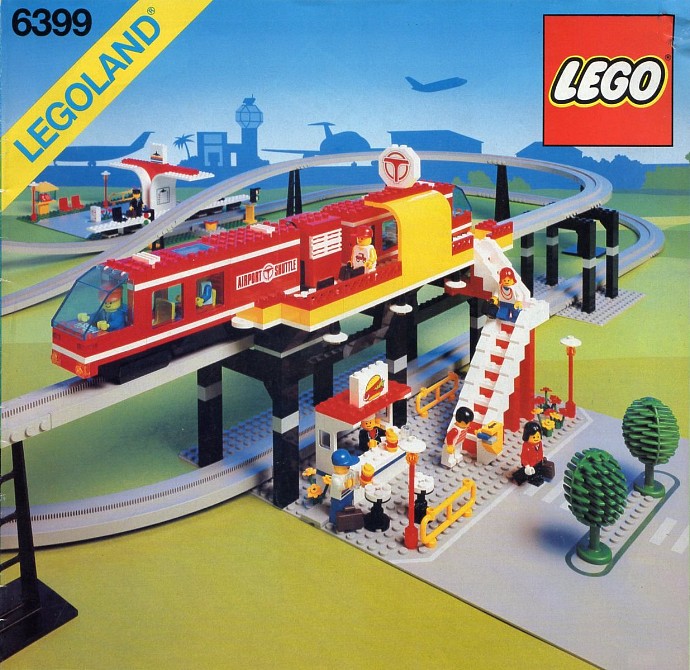 You can also build your own inclines, but keep in mind that it takes quite a bit of space. You can't do much more than 2 plates of incline per track section for most trains.

Each era of trains has had switches, so this is not an issue.

Other than the one you mentioned, I don't think this has ever been released before. It seems like it would be pretty difficult to build custom track from parts, and this would very challenging to build.

Sets often come with example layouts including which track pieces that you need. Here's one example from an old 12V set: 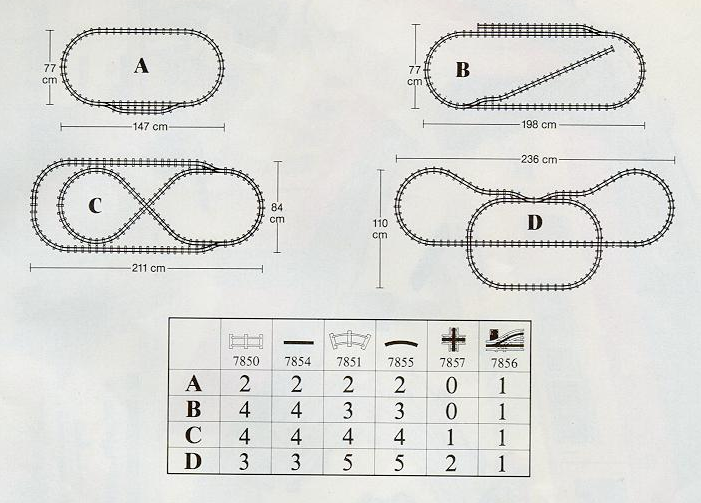 Here's a similar example from a 9V set: 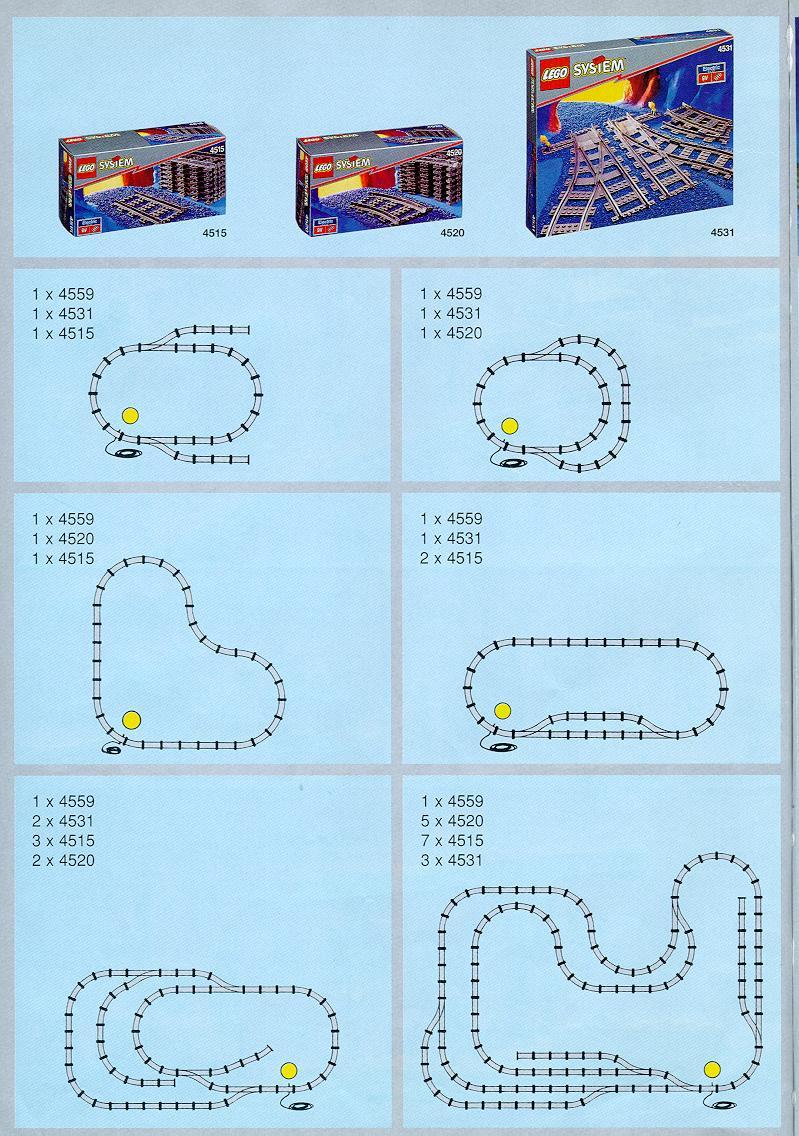 I'll just leave you with this cool 12V layout video.

You can create crossover tracks out of LEGO elements much like I did in this video. 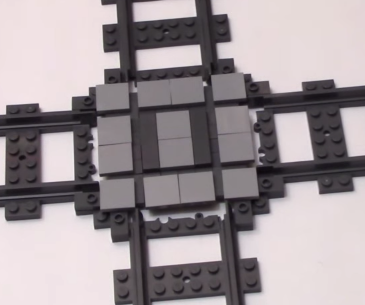 I got all the parts for around 4€

Also you can create your own slopes will standard LEGO tracks. You can watch then in action in this video https://www.youtube.com/watch?v=LMWF465KWfY and read about how to create them yourself at The Technic Gear.

My advice is just take a sheet and think and draw before start building.

The crossover hasn't been done in RC track, but a 9V crossing will work just fine, as PF and RC track are physically compatible (the only difference being the lack of conducting metal on PF track, which is a problem only when using 9V motors).

LEGO never produced specific bridges, which makes sense since everyone builds his own. The closest thing would be Heavy hauler, which contains ready-made bridge elements - but that's the upper decoration only, you'd still need to build a sturdy structure under it.

Another reason why LEGO probably never made any is that they'd also need to take sloping into account, and it would mean a set containing way too much track. The Duplo and monorail slopes can be very steep because the trains use gears on a rack, but a regular LEGO train will need a way more gentle slope. Some people recommend no more than 1 plate every track piece; 1 brick is really pushing it (depending on your train), and more is certainly not a good idea. Even with 1 brick every track piece, you'll only get 8 bricks higher every meter. Not a problem if you've got the bricks and track, but it makes sense that LEGO wouldn't produce a full slopes/bridge set.

When LEGO introduced RC track, one of their arguments was that they would be able to do much more fun stuff with track, which they immediately demonstrated with the double-crossover switch, and later with the flex-track, but unfortunately they haven't really followed suit on that topic. Probably trains aren't such a big market for LEGO (that's the reason they stopped 9V to start with).

And you didn't read this from me, but RC track is easier to mod than 9V track...

As for what's possible, keep in mind there are some existing software for track planning. Even LEGO has a basic online one, but for serious stuff you'd probably better use Alban Nanty's BlueBrick. There's also Train Depot Track Designer which hasn't been updated in a long time but may still prove easier to use.

Here is a new cross track available from Bastens http://www.bastens.com/cross-train-track-lego-compatible.html which is more stable than building one from scratch.

Not the answer you're looking for? Browse other questions tagged trains power-functions or ask your own question.

15
Is it possible to add the power functions to Western Train Chase?
6
Making or buying a really long Power Functions cable
5
How to build an automatic Lego train system?
8
What are the largest LEGO® Power train sets available commercially [Oct 2014]
5
How can I prevent my train from derailing?
4
How to run two LEGO electric trains at the same time?
6
Lego track switch doesn't close properly
2
Looking for a way to connect SG90 servo motor to Lego Technic hole in a brick, in order to control Lego train tack switch
5
Choosing scale for train models: what scale is "L-gauge"?
11
12V LEGO train tracks splinter