What are the armless minifigures from the LEGO boardgames called?

I see many of the LEGO boardgames come with mini figures which are armless and have no holes for arms. While I think it is kind of ridiculous to not simply provide a full figure, I understand it's probably primarily for usability purposes.

What are these smaller minifigs called?

When looking at the inventory of one of the LEGO games (as if you were missing a part), you can see these are clearly labelled "MICRO FIGURE" 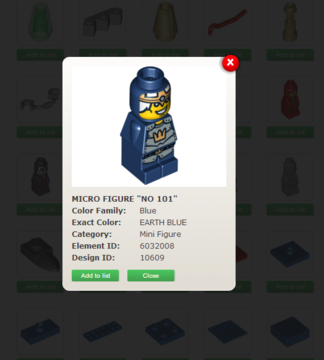 On Bricklink they are known as 'Microfig', Lego Digital Designer refers to them as 'Micro Figure.

Microfigures. Described by LEGO as "Microfigures...The Minifigures for Minifigures!" As far as useability go, it is true that within the Games theme they are only used as pawns/game pieces. However, in recent years, they've seen larger use. for example, in the 2012 Star Wars set "Palpatine's Arrest", it is used unprinted in pearl gold to represent a statue/trophy. As far as the community go, they've been pretty popular with fans to create micro-sized builds, and perhaps even more so as pilots for micro-sized robots.

Not the answer you're looking for? Browse other questions tagged terminology microfigure or ask your own question.

15
What are the tiny, single-peg, statuette figures from the SHIELD Helicarrier called?

19
What are the arched things above a wheel called?
17
What are the characteristics of "Miniland" scale?
24
What are LDUs and how do they relate to LEGO bricks?
21
What are the female parts called?
17
What do the terms "vintage" and "classic" actually mean?
15
What are the tiny, single-peg, statuette figures from the SHIELD Helicarrier called?
6
What is the name of the small pins that are used with small wheels / rims?
14
What is the Travis Brick?
6
What does the acronym SPUA stand for?