A trick that's worked for me in the past, is to use a 1x1 cone with a Technic axle in it (it needs to be the cone without the top groove, unlike the example below) - this will allow you to force the tapered end of the cone into the hole on the bottom of the head, and by fastening a Technic gearwheel, brick or larger cylinder to the Technic axle, you'll be able to apply a fair amount of force to increase the clutch of the cone piece in the head and twist to loosen it from the helmet with a push-twist-pull movement. Good luck. 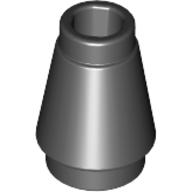 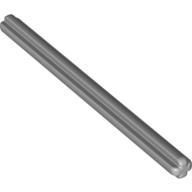 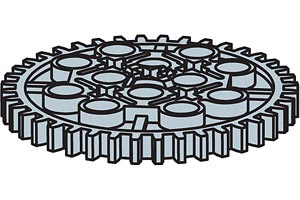 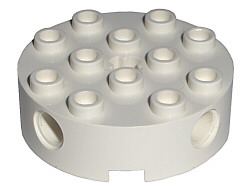 A quick and easy way to remove a helmet stuck onto the head...I used a piece of Bounty kitchen roll, approximately 3cm x 3cm, (which is actually thicker then a single ply toilet tissue) and placed this over the stub of the body then pushed the head onto this. The head will not go all the way down, but far enough for it to remain firmly in place. Then I was able to remove the helmet very easily.

Grab a sharp knife. Stick it inside the head on a slight angle and twist the helmet off. This has worked every time for me. :) Just be careful when you do it!

You can put some duct tape on top of a LEGO axle and push it into the head hole and twist until it comes out!

I boiled some water. Then I stuck a pencil eraser in the head. After that I dipped mostly just the helmet in the water. Finally, I attached the head to the torso and kept on twisting the helmet until it got loose and fell off.

I hope this works for someone else!

23
Why are minifigure head studs now hollow?
11
How do I remove a racing helmet from a garbage can?
3
How can I fix my chewed up LEGO head?
5
Verify authenticity of the Star Wars Snowtrooper minifig
5
How can I remove old LEGO bricks that are stuck together?
1
Fiery hair/head
3
Miniature Lepin box door stuck inside box itself
0
How to assemble the snake-head axe