Is (C) engraved on a piece an indication that it is Cobi brick?

I know that Lego prints their logo on almost all of their bricks, but some are not given this privilege. I have a couple of pieces, 3x3 in a shape of 2 fingered foot, two pin holes on front corners and one pin hole in the back and an axle in the very middle which goes parallel to the ground surface. 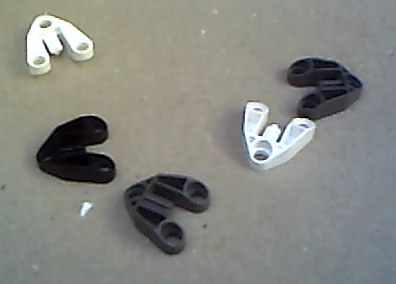 Now it would be all fine for me, but they also have engraved "C" in a circle which can either stand for Copyright or Cobi (a polish toy producer). I have failed to find these pieces on Bricklink but I vaguely recall them to be genuine Lego pieces. Can someone help with identification of them?

The symbol stamped on the parts you are asking about is the international copyright symbol © and is common on nearly anything with a copyright and not indicative of any particular brand or producer. A decent description of the use and purpose of the symbol can be found at http://www.copyrightlaws.com/international/522/

The tops of Cobi bricks have "Cobi" stamped on them. They also have a limited range of non-brick/plate parts available and have not duplicated many of the Technic parts, including the part in your image (at the time that I am writing anyway).

LEGO produces many parts in many different kinds of plastic and so while a part might not have the same feel as a standard 2x4 brick it doesn't mean that it isn't a LEGO part. The Bionicle/Hero Factory series of sets in particular use a lot of parts molded in plastic that is much less stiff than the ABS used for the System bricks. You were very close in your identification of the part in your own answer as "Technic, Axle and Pin Connector 3 x 3 with Axle" (Though the correct BrickLink part number is 111b, not 113b), however the actual part is instead "Technic, Pin Connector 3 x 3 with Axle" since they appear to be sloped on the ends rather than being a standard width for the entire part. The official LEGO name for the part is "32175 FOOT WITH CROSSAXLE" (Found in LDD v4.3, Brick Version 1182).

Not the answer you're looking for? Browse other questions tagged part-identification 3rd-party or ask your own question.

9
LEGO brick competitors?
8
Factories that could make off-patent bricks?
4
Unknown brick/piece information (curved, decorated slope)
4
LEGO variant, or is it?
5
Is there a slotted yoke piece?
5
Could you help me identify these vintage bricks with holes in the studs?
5
Mystery 2x14 grey brick - cannot find instructions with this piece mentioned
2
Are there LEGO plates without the word “LEGO” on the studs?
4
How to verify authenticity of smaller LEGO parts?
3
What is this piece that looks like a coat rack or armor stand?