Technique for multifacteted roof without 3049

I'm working on a project with a fairly complex roof in Dark Bley. In many areas, it seems to be necessary to use part 3049: 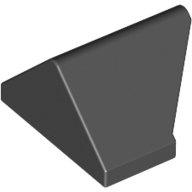 Unfortunately, this part doesn't appear to have ever been released in Dark Bley. Are there any alternative building methods to achieve the sort of effect that I'm looking for without using 3049?

For clarification, here's one simple example where I'm not sure how best to finish the roof peak without using the missing part (shown in red): 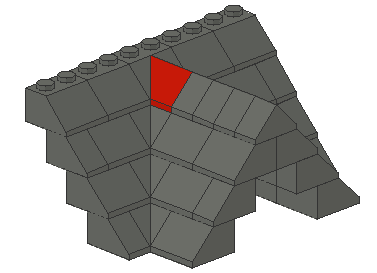 You could also replace the part with a 3048 which does exist in dark bluish grey.

Sure the roof will look a little strange, but the effect might be interesting enough that you'd be willing to do that.

Another solution would be to replace all roof points by tiles.

In both cases, you can also start the weirdness one rank lower (in the last case, having tiles on 4 studs instead of two).

Since you won't be able to to it exactly as you could if you had a 3049, the key is to experiment until you find some new combination which looks satisfying enough to you.

Would it be possible to just use a black one, or old dark gray? It would add a little variation to the roof, which is not a bad thing - it would look more natural. Perhaps the other color could be added to some other places here and there as well, so the colors all pull together nicely.

Other than that you could always add a chimney, but as you mentioned you will have several places where you will face this issue. I can't think of any other piece that could serve the purpose exactly like 3049. You might also consider angled plates, which are other commony used pieces for roof-building. But without seeing your project it is hard to tell if that would work.

20
How do I build a sloped roof with a 60° rake?
15
Is there a Technique or Algorithm for Building Spheres?
10
What is the easiest technique for large builds?
8
Representing pregnancy on LEGO minifigs without a dome
7
What is the best system for lifting things without pistons?
6
Articulations : which technique to use on small constructions for sturdiness?
1
How can I fix this gap in the Ghostbusters Firehouse roof?
5
Building technique for plate at near 45 degree angle
3
How to build a waterproof roof out of LEGO blocks?
5
Technique for holding a horizontal minifig in place (swimmer)